Construction on a new school at Jost Van Dyke is set to begin within the next few weeks, according to Recovery and Development Agency Director of Programme Strategy Dr. Neil …

END_OF_DOCUMENT_TOKEN_TO_BE_REPLACED 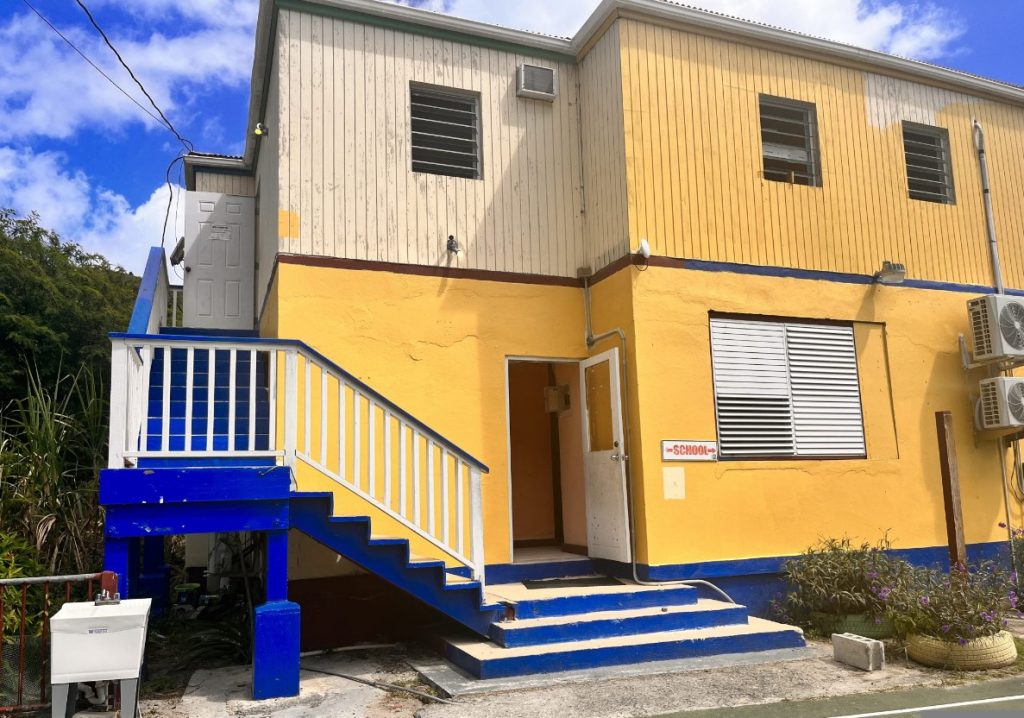 During a public meeting last Thursday, leaders shared their vision for a new Jost Van Dyke Primary School that also serves the wider community. Last month, the government signed a $4.3 million contract with Quality Construction Limited to build the facility. The current school, above, has been beset with mould and other issues. (File photo: ZARRIN TASNIM AHMED)

Construction on a new school at Jost Van Dyke is set to begin within the next few weeks, according to Recovery and Development Agency Director of Programme Strategy Dr. Neil Smith.

Residents joined in a discussion of the development on Sept. 15 on the island, where legislators explained plans for a facility they said will be designed to serve as a learning environment, a space for community meetings, a resource centre, an adult night school, and more.

“What we are discussing today is not just a school, but a multifunctional facility that is intended to serve the entire Jost Van Dyke community,” Dr. Smith said.

Last month, the government signed a $4.3 million contract with Quality Construction Limited to build a new JVD Primary School in place of the moulded facility that suffered major damage from the 2017 hurricanes.

Premier Dr. Natalio “Sowande” Wheatley said at the Aug. 25 contract signing that donors had raised more than $300,000 for modern equipment like SMART Boards to outfit the school when it opens. He added that he would push for construction to be completed by September 2023.

On the first floor, she added, there will be seven more classrooms, a science lab, a computer lab, a large assembly room, washrooms, and a general office area.

“It is designed to meet the scholastic needs of the students and teachers, and also the community’s needs for gatherings and meetings,” she said, adding that larger outdoor events could be hosted in the courtyard.

Education, Culture, Youth Affairs and Sports Minister Sharie De Castro acknowledged that the project was a long time in coming.

“All educators truly deserve to have a space that is fit for purpose and that is conducive to learning,” she said.

Natural Resource and Labour Minister Mitch Turnbull (R-D2), who represents the island, said he is eager for the heavy equipment to start construction in the coming weeks.

He noted that JVD students faced facilities challenges even before the hurricanes, and he commended Principal Lavern Blyden and her staff for continuing to adapt.

“I am excited about what is to come,” Mr. Turnbull said. “I know there is a grave concern about why the school has to be so big and why this and that? My question to a lot of people is why not? If you have left this community behind for some 20-plus years, and you have allowed the students and teachers of this facility to be in this environment for so long, why not build for the future?”

He also urged project planners to involve JVD residents in the construction as much as possible — a recommendation community members seconded during a question-and-answer session.

Meeting attendees expressed their pleasure that the project is finally getting under way, but they reiterated that it is long overdue.

Student Frank Chinnery also questioned whether the school would have a playground and basketball court, which Mr. Turnbull and Dr. Smith said they “wholeheartedly agreed” should be included.