Worship in the time of Covid-19

Sunday, May 10, was the first day leaders at the Cane Garden Bay Baptist Church were allowed to return to the sanctuary, and Pastor Dr. Michael Turnbull said their reunion …

END_OF_DOCUMENT_TOKEN_TO_BE_REPLACED 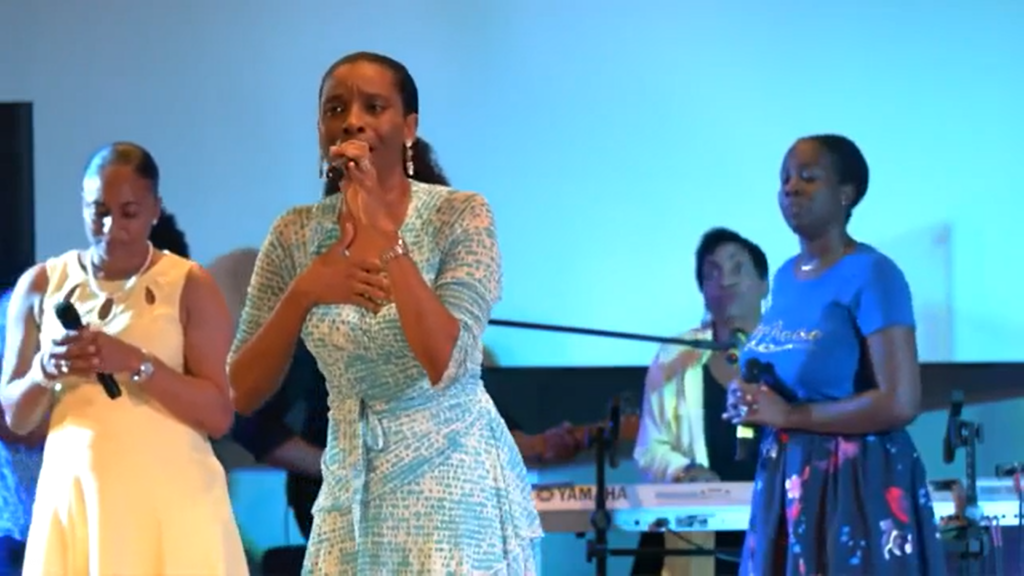 Choir singers bring life to Cane Garden Bay Baptist Church’s digital service Tuesday, as the church works to continue meeting the needs of its congregation while adhering to restrictions on public gatherings spurred by the Covid-19 pandemic. (Photo: PROVIDED)

Sunday, May 10, was the first day leaders at the Cane Garden Bay Baptist Church were allowed to return to the sanctuary, and Pastor Dr. Michael Turnbull said their reunion was emotional as they met to plan their next moves.

“We hadn’t seen people for six weeks,” he said. “Just to be there and gather together and have that strength was just amazing. It was a priceless moment. We want to have those moments so we have the energy to continue to give back to others.”

As religious organisations have been able to partially resume activities and meet in small groups, leaders have been working to feed those affected by the pandemic and provide spiritual guidance.

Places of worship can now open between 6 a.m. and 1 p.m. after securing approval from government’s Social Distancing Monitoring Task Force and establishing protocols to observe social distancing measures, per an updated curfew act Gazetted on May 6.

Because the most recent curfew order still doesn’t allow for large gatherings, however, most religious organisations are still employing the digital resources they used in order to reach members during the recent lockdowns.

Dr. Turnbull said his church’s digital services were an avenue for inspiring courage, the theme of March’s lecture series.

“By being able to sing a song and have an outlet, being able to pray to God, being able to feel connected even though it’s through technology — and you can see that you’re watching with service with a couple hundred other people — that connection is still there,” he said.

No more than 20 people could return to the church on May 10, but Dr. Turnbull said the informal reunion with church members was an amazing experience.

He added that the church is in a good position to continue offering its 10:30 a.m. Sunday service online even with restrictions on group gatherings, which it did this week. The reverend also shares some of his favourite scriptures on “Refuel Wednesdays.”

For the live broadcast on March 22, the first since the restrictions were implemented, the church brought together musicians and church leaders. More than 6,800 people tuned in to the video, with viewers from as far away as Australia. Dr. Turnbull said congregation members can also interact and pray collectively through www.cgbbcc.online.church, which features a feed and digital bible.

“We’ve been doing church online for maybe a year and a half, but not in this kind of circumstance,” he said.

Dr. Turnbull added that the church is working tangibly as well as spiritually to support community members. In the first week of May, it partnered with One Mart to distribute 100 cases of water to community members.

Visitors could load a case of water in their cars via a drive-thru system, meaning no one had to come in direct contact. The church also worked with Brandywine Estate Restaurant and the Wellness Center Behavioral Clinic to feed 200 families, and mothers also received a rose in celebration of Mothers’ Day.

As hundreds of people in the territory unexpectedly find themselves without work, the church plans to continue giving back in any way it can, according to the pastor.

“I see it every day, how difficult it is for persons to deal with what is happening to them and around them,” Dr. Turnbull said of his experience in his psychology private practice.

He encourages those who can to drop off canned goods at the church from 9:30 a.m. to noon daily to help restock the pantry and aid in continuing efforts to give back.

Even before the government-imposed curfew, Reverend Edward Gumbs, the bishop of the Episcopal Diocese of the Virgin Islands, ordered the churches he oversees to cease services in keeping with new rules designed to prevent the potential spread of the coronavirus.

At St. George’s Episcopal Church in Road Town, Reverend Dr. Ian Rock was prepared. He had been facilitating services through Skype and Zoom for some time, and making the transition to fully digital was not difficult, he said.

“I think that is part of the pastoral responsibility of the church. We are reaching out not just to our members, but through an online facility we are trying to reach out to the entire community that is hurting and in need of healing at this time,” Dr. Rock said in an interview.

Mr. Gumbs said other Episcopal churches in the United States VI also have offered services through radio and social media for years.

“What we took for granted all of a sudden has become a saviour, because these broadcasts are now the only lifeline, their contacts with their family of faith and their regular worship experience,” he said.

Dr. Rock said the reaction to strictly online services has been bittersweet: “one of disappointment at not being able to see your old friends and to say ‘hi’ and to hug, but on the other hand, it has been one of appreciation and understanding.”

BVI Islamic Society leader Lesville Wheatley, also known as Abdul Aziz, said the biggest effect of the social distancing rules at the Road Town mosque was on its Friday prayer, Jummah. The mosque in Road Town is usually open for five daily prayers, but Mr. Wheatley said the sessions typically involve smaller groups as many members elect to pray at home during the day. However, the sense of community that comes with the Friday prayer is important, and more than 50 people usually attend in person. But social distancing measures mean that isn’t possible right now.

Mr. Wheatley said the society will continue to adhere to the established rules and protocols as each phase of reopening of the territory is implemented.

“We continue to pray for Allah’s mercy and protection upon the BVI and the entire world,” he said. “Yes, indeed, these are uncertain times. But we must all try to persevere as one people for the good of humanity.”

The last large gathering of 30-plus members was on March 20, and it is unclear when that many people will be allowed to congregate again.

“The Friday prayer is something that the society members look forward to,” he said. “It’s where we come to get rejuvenated, so to speak, with our faith and get recharged with our faith after going all week long. We pray every single day, five times a day — this is part of our recharging on a regular basis — but on Friday we come together as a group. We meet, we greet, we speak with each other, we encourage each other, and we listen to the sermon for the day.”

However, Mr. Wheatley said they took the opportunity on the last Friday before the lockdown to notify attendees of the latest news on the outbreak, and through the community network hopefully reach most Muslim families in the territory.

Mr. Wheatley noted that following the law of the land wherever they live is an essential component of most Muslims’ beliefs, and members are doing what they must to follow government’s mandates on Covid-19.

Members are coordinating with one another to hold a number of smaller gatherings of seven or so attendees in individuals’ homes on Fridays, according to Imam Abdul Malik.

For those who were able to attend in-person services, Mr. Wheatley said the mosque was implementing strict hygiene practices in conjunction with those it already follows. The measures include leaving shoes outside, offering hand sanitiser, reducing hand shaking and shortening the time of the sermon, or khutba. The society also suspended its Arabic classes.

Members have also made arrangements to have the building sanitised regularly, which falls in line with the mosque’s preparations for Ramadan, a month-long observance that will conclude on Saturday.

“Also, as is relayed by our Prophet Muhammad — sallallahu alaihiwasalla; upon whom be peace — when an individual finds himself sick, it is compulsory on them not to attend the congregatory prayers,” he said. “If you find yourself sick, you should pray your prayers at home.”

He said members are also urging people to stay at home and call the hotline at 852-7650 if they feel symptoms related to the coronavirus.

Mr. Wheatley said government’s recommendations on frequent hand washing and other practices already align with some Muslim practices, like coming to prayer in a state of wudhu or ablution.

“Upon coming to the mosque, if you don’t have your ablution — which is basically you come clean, you wash your hands, your feet, your face, all the necessary areas that we are obligated and commanded to wash,” he said. “If you come without wudhu, there is a place that we call the wudhu station.”

Mr. Wheatley said the mosque is also taking proactive contact-tracing measures by having attendees sign in so members would be able to easily relay that information to the relevant health authorities should a case be confirmed in the VI.

“We are trying our best to accommodate all the different restrictions that have been put in place,” Mr. Wheatley said.

The imam said maintaining a strong sense of community in whatever ways possible is invaluable during such a challenging time.