A team of divers floated in the water off The Dogs near Virgin Gorda, looking up at the crane lowering a “Sharkplaneo” into the sea. Tugging on a rope attached …

END_OF_DOCUMENT_TOKEN_TO_BE_REPLACED 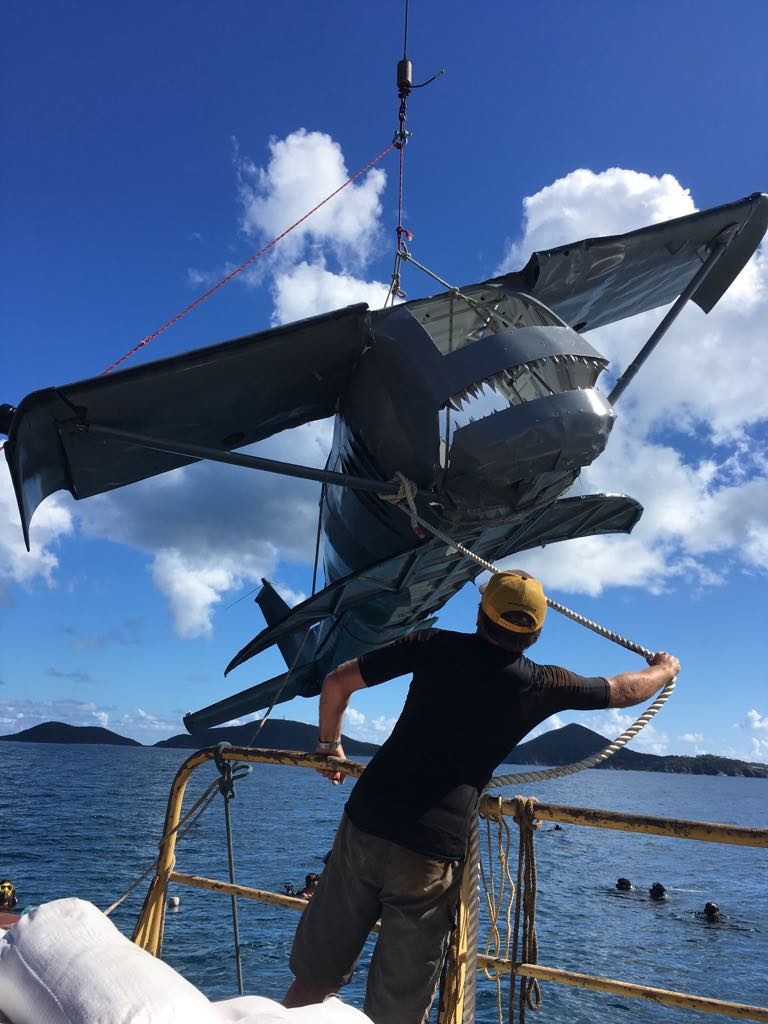 A crewmember tugged a “Sharkplaneo” so that it safely enters the water near The Dogs off Virgin Gorda. Three of the structures were sunk in the area as a dive site. (Photo: JOEY WALDINGER)

A team of divers floated in the water off The Dogs near Virgin Gorda, looking up at the crane lowering a “Sharkplaneo” into the sea.

Tugging on a rope attached to its front end, a crewmember turned the “Sharkplaneo” — so named because it looks like a hybrid between a shark and World War II-era war plane — so that it would not hit the barge on its way to the water.

Once sub-merged, the divers released it from the crane.

“It looks like a [expletive] great white!” one of them yelled.

The crew from Commercial Dive Services then put on their respirators and guided the plane to the ocean’s floor, securing it in place.

By sinking three of the 15-foot-long “Sharkplaneos,” Chris Juredin, who led the operation, hopes to create a new dive attraction to further the Virgin Islands’ reputation as a global scuba destination, he said.

“I like to see this as the start of something very good for the BVI,” Mr. Juredin said.

With few specialty dive sites left around the world, Mr. Juredin thinks that the VI’s offerings — which include artificial sites like the “Sharkplaneos” as well as ships wrecked centuries ago — stand out amongst similar destinations, he said.

Strengthening and preserving these offerings can “turn this into a place where even snorkelers will have unique experiences,” he said.

The Sharkplaneos’ sinking last Thursday set the stage for the start of Wreck Week over the weekend. Held throughout the first week of December, Wreck Week has featured parties, events and discounted excursions to stir interest in the VI’s scuba sector.

Though Wreck Week had been held in the past, this is the first time since the 2017 hurricanes rocked the territory’s scuba industry, said Kim Huish, president of the BVI Dive Operators Association.

In reinstating the annual tradition, diving stakeholders saw an opportunity to make it better, and have sought to engage more Virgin Islanders in the dive scene, Ms. Huish said.

Mr. Aldridge also praised the Hendo’s staff, who went all in with the pirate-themed attire and poured great drinks, he said.

Largely because Mr. Aldridge’s dive shop is so close to the island’s primary school, many JVD children regularly express great interest in the scuba world, and Mr. Aldridge holds several programmes each year to try and bring them into the fold, he said.

“We all would love to have BVIslanders working for us instead of people on work permits,” he said, adding, “They don’t need a place to live; they don’t need to integrate into a culture and spend the money it takes to move here.”

He also strongly supports sinking manmade structures, which he said rapidly attract wildlife and are almost guaranteed to become a captivating site.

“I think it’s huge,” Mr. Aldridge said. “When you drop anything on a sandy bottom, life will be there in days.”

Such attractions also invite repeat visitors: If somebody dives a site that has just been created, it’s more than likely they will want to come back at a later date to see how things have changed, he said.

On Monday evening, many of the territory’s scuba professionals converged on The Moorings for a meet and greet with prospective divers.

According to Ms. Huish, turnout at the meet and greet was rather low, but she was not discouraged: This year’s Wreck Week attracted significant media coverage and laid the groundwork for improvement in years to come, she said.

“This is just the beginning and we are learning as we go … but we are very pleased so far,”Ms. Huish said