Wreck Week to return next February

Hoping to highlight the Virgin Islands shipwrecks that draw divers from around the world, organisers are bringing back BVI Wreck Week next February. The event, which was last held in …

END_OF_DOCUMENT_TOKEN_TO_BE_REPLACED 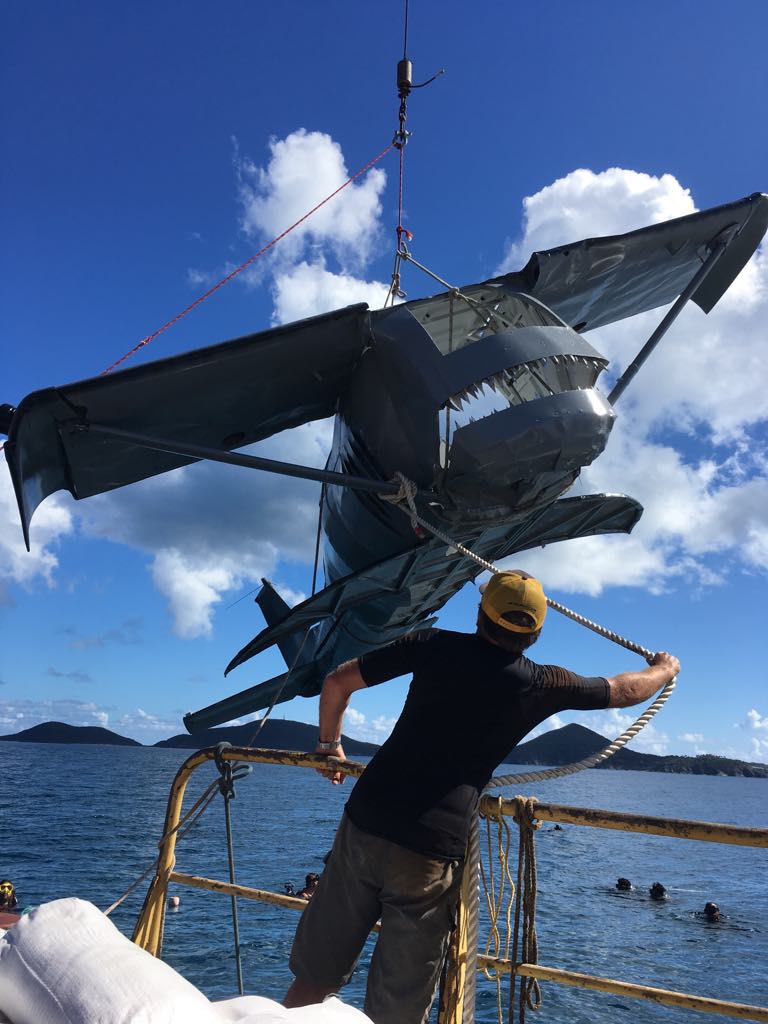 Beyond the Reef sank the iconic “Sharkplaneo” sculpture near The Dogs during the 2019 Wreck Week celebration, an event making its return in February. (File photo: JOEY WALDINGER)

Hoping to highlight the Virgin Islands shipwrecks that draw divers from around the world, organisers are bringing back BVI Wreck Week next February.

The event, which was last held in 2019, is scheduled to include a variety of activities that celebrate the VI’s marine sector.

Organisers Alton Bertie and Kim Huish, president of the BVI Scuba Organisation, shared the line-up for this year’s celebration with stakeholders on July 27.

“Wreck Week isn’t just about the water,” Ms. Huish said at the launch event at SushiBar in Road Town. “It’s about the history of the BVI.” 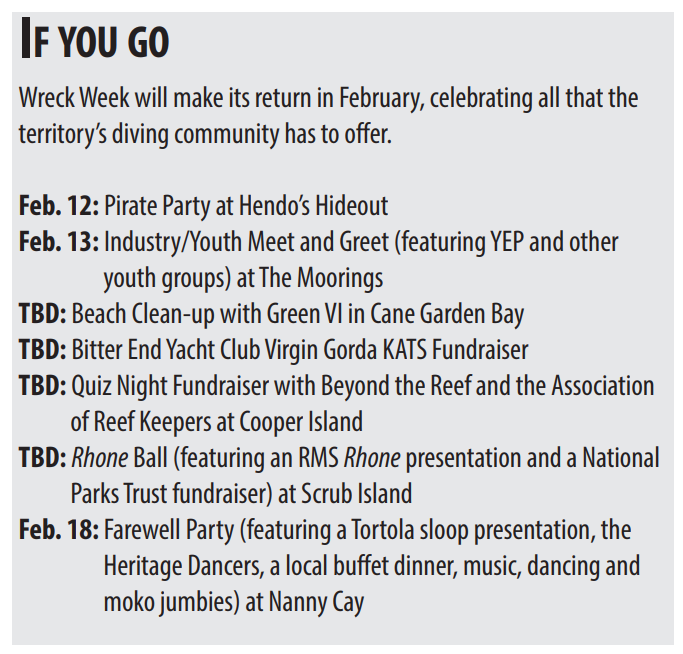 Festivities will kick off with a pirate-themed party at Hendo’s Hideout on Jost Van Dyke on Feb. 12. The party will include a treasure hunt for gift certificates, an appearance by Neptune’s Nectars mermaids, signature cocktails, special menu items, and more.

Land-based events will be interspersed throughout the week, including fundraisers, beach clean-ups, and a trivia night.

Also on offer is the Rhone Ball, which recognises the wreck of the RMS Rhone — an attraction that holds appeal for many visitors considering that it is accessible to snorkellers as well as scuba divers.

At the ball, attendees will be treated to a champagne cocktail reception, dancing, dinner, an auction for the National Parks Trust, and a presentation by historian Dr. Mitch Kent about the demise of the Rhone in 1867, the yellow fever epidemic, and a trio of natural disasters that befell the VI in a matter of weeks. The week will end on Feb. 18 with a farewell party featuring a local buffet dinner, the BVI Heritage Dancers, moko jumbies, musical entertainment, and a presentation on Tortola sloops.

VI marine companies will be offering special deals as well.

Ms. Huish said she wanted to help bring back the event to celebrate how much the diving community does to support the territory, both directly and indirectly. She noted that the VI’s wrecks frequently appear in votes for the Top 10 Caribbean destinations.

She said she particularly looks forward to highlighting the VI’s marine history.

Mr. Bertie — who had hardly gone in the water four years ago but now scuba dives regularly — said he is excited for this year’s line-up, which features collaborations with several youth organisations.

By making diving more accessible to young people in the territory, Ms. Huish said she hopes to inspire the dive instructors and marine biologists of tomorrow.

Deputy Governor David Archer offered his support for the event, pledging he would at least attempt to go beyond snorkelling by February.

“I do believe we have one of the most amazing sets of vistas underwater, more than anywhere else in the world,” he said.

Ms. Huish said the diving industry is starting to show a strong comeback from the 2017 hurricanes and the pandemic.

Dive BVI owner Casey McNutt, one of the key organisers of the first Wreck Week in the early 2000s, said the celebration originated out of love for the diving community.

“It centred around the idea that we wanted to try to have some sort of larger diving event that brought all the operators together and was something we could collectively promote,” she told the Beacon.

While various regattas and yacht weeks have long celebrated the VI’s sailing community, she wanted to host an event that focused specifically on the diving industry, she explained.

Organisers originally brainstormed the idea of creating a sculpture garden, but when that idea didn’t come to fruition, they decided to celebrate the shipwrecks already located in the territory, like the Kodiak Queen, the Rhone and the Chikuzen.

From there, the idea blossomed into holding various potlucks and music-based events on the sister islands in between visiting all the popular wreck sites, concluding with a visit to the Rhone.

Wreck Week became an annual tradition, and though it faded with time, it staged a comeback in December 2019 when Beyond the Reef helped sink the “Sharkplaneo” sculpture and the old Willy T, sites that now draw divers from all over.

Ms. McNutt, who no longer lives in the territory, said she is glad to see such renewed interest in the celebration.

“We’re now to the point where we feel like the infrastructure of the destination is recovered enough to really promote it,” she said. “We feel like our hotel and resort and villa partners also feel a sense of stability now — at least since Covid. We’re all looking for new ways to promote our destination, and it’s cool to watch [Wreck Week] come back.”