Over the course of its 76-year maritime history, the Kodiak Queen has managed to endure a lot more than the occasional summer squall. Originally a United States Navy fuel barge …

END_OF_DOCUMENT_TOKEN_TO_BE_REPLACED 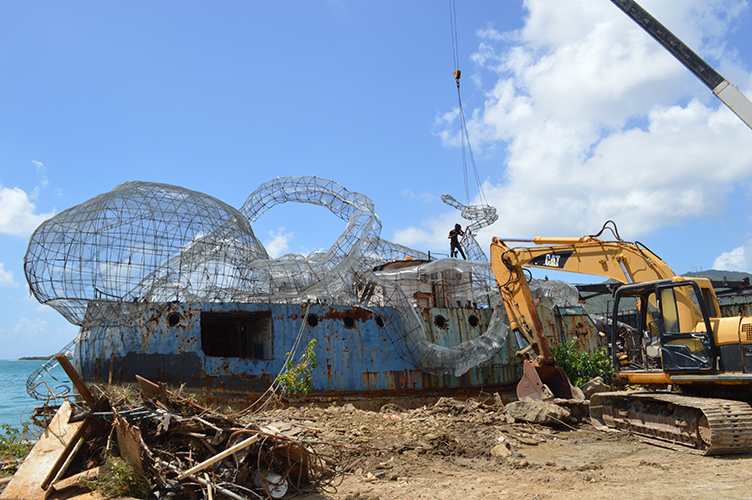 Over the course of its 76-year maritime history, the Kodiak Queen has managed to endure a lot more than the occasional summer squall.

Originally a United States Navy fuel barge named YO-44, the vessel thumb-tacked itself into American history books after being one of the few ships to survive the Japanese sneak attack on Pearl Harbor in 1941.

From there, the ship was eventually repurposed as a trawler for work in the gruelling world of commercial fishing, and, after six bruising decades all over North America, it found itself waylaid at a floating junkyard of derelict vessels in Tortola’s own Baughers Bay.

And now, after years of sitting stagnant in the Virgin Islands, it is being attacked by a giant octopus.

Drivers rolling past Baughers Bay recently may have noticed the top half of a translucent Kraken rising up out of the shipyard.

There is no need for alarm, however: It is not, in actuality, a legendary sea monster, but rather an interactive piece of artwork welded to the stern of the historic vessel.

As soon as the weather permits, both ship and beast will purposely be sunk off the northwestern tip of Virgin Gorda to create what stakeholders have titled the “BVI Art Reef.”

The effort is the result of collaboration between community and international organisations determined to preserve the ship and create a new underwater tourist attraction in the territory.

In 2012, Mike Cochran, a dive computer developer and amateur naval historian, spotted the group of derelict ships in Baughers Bay while sailing through the Virgin Islands.

He pulled closer to the vessels and photographed them, including the Kodiak Queen. After he returned to his home in Texas, Mr. Cochran researched the ship and discovered its significant history, which drove him to create a website dedicated to informing people of the Queen’s past.

“It takes some optimism to think that a ship like the Kodiak Queen could be saved and perhaps restored to a place of honour,” he wrote on the site. “It would be a shame to know about its history and just let it slide away and turn into scrap metal.”

A few years later, Owen Buggy, a boat mechanic for Necker Island at the time, also decided to poke around the rusty ships in Baughers Bay.

“I used to come bring the RIBs in here for repair a lot, and I noticed the shipwrecks,” he said. “And I love shipwrecks, so I just started thinking about it and I had the idea of maybe sinking one near Necker so the guests could dive it.”

And after a quick internet search on the ships led to Mr. Cochran’s page, Mr. Buggy discovered one was much more than just a derelict junker.

“I found out the boat was in Pearl Harbor and it suddenly had a lot more clout,” he said. “So I pitched the idea to [Sir Richard Branson] in late 2015 and he loved it, and from there on I got rolling.”

Mr. Buggy came up with the idea to attach a Kraken sculpture to the vessel and was soon aided by two entrepreneurs associated with Maverick 1000: Aydika James and Mike Cline, who both have a history of working on unique art projects through their company Secret Samurai Productions.

“Four or five years ago, I really started to get into weird wacky art builds — creative projects,” Mr. Cline said. “Just for fun and expression. We actually took a [Toyota] Prius and turned it into a giant peanut-butter-and-jelly sandwich with wings, and served gourmet, gluten-free, cinnamon-buttered, toasted peanut-butter-and-jelly sandwiches out at Burning Man on this thing.”

The reaction Mr. Cline received from his sandwich mobile helped him discover a theme he would pursue in future projects.

“Because it was so audacious, … the response was such that people were kind of distilled to their 8-year-old selves,” he said. “At the heart of all of us, when all of your basic needs are met, what you really want to do is play. It’s really about the power of play.”

After completing a few more art projects, a Maverick 1000 retreat at Necker Island led him to the Kodiak Queen effort.

Several VI dive operators have agreed to charge clients a built-in donation for using the site, which will go back into a fund to keep it operational, Mr. Cline explained. Excess money will be directed to facilitate local youth swim education and ocean conservation programmes, Ms. Keil added.

Getting children in the water to admire marine life at an early age increases the likelihood that they will be environmentally conscious adults, she said.

The 80-foot-long Kraken is roughly double the size of the largest-known giant squids, according to Mr. Cline.

For lead artist Drew Shook, constructing such a beast was no easy task.

“I’ve had some really difficult jobs and difficult sculptures, and this has been the hardest thing I’ve ever done,” he said. “Working on this boat, every step is a death-trap. … There are holes and rust and jagged edges.”

The ship has been seriously cleaned up for divers, though, Messrs. Shook and Cline noted.

Once underwater, it will feature swim-throughs and photo opportunities, and the vessel is already dotted with artwork by VI schoolchildren.

After the ship is sunk, divers will graft coral onto the Kraken to make a coral garden, Mr. Buggy explained. Ideally, he added, people should leave the site alone for a couple of weeks so marine life can accumulate around it unhindered.

Additionally, phase two of the project could see certain passageways in the Kraken lit up for night diving and outfitted with live-streaming cameras for observation, he said.

Both the VI-based Association of Reef Keepers and Beneath the Waves, an international marine conservation non-profit, also partnered with the project.

Beneath the Waves plans to assess the artificial reef and its effect on marine species repopulation by studying environmental DNA from the site, research the project website calls the “first of its kind.”

Internationally, however, the jury is still out as to whether artificial dive sites have positive effects on the environment.

Artificial reefs can draw divers away from surrounding natural ones, lessening the burden of inevitable human damage to organic coral reefs, according to the United States Oceanic and Atmospheric Administration.

But without careful planning, such projects can lead to toxic underwater emissions and act as the spawning source for invasive species, the administration explained.

Few artificial dive reefs in the world have been underpinned by same level of environmental planning as the Kodiak Queen, he said.