Bamboushay pottery mugs and an award for volunteer work decorated the main cabin of a 62-foot Leopard catamaran called The Big Dog, which was on display at the Nanny Cay …

END_OF_DOCUMENT_TOKEN_TO_BE_REPLACED 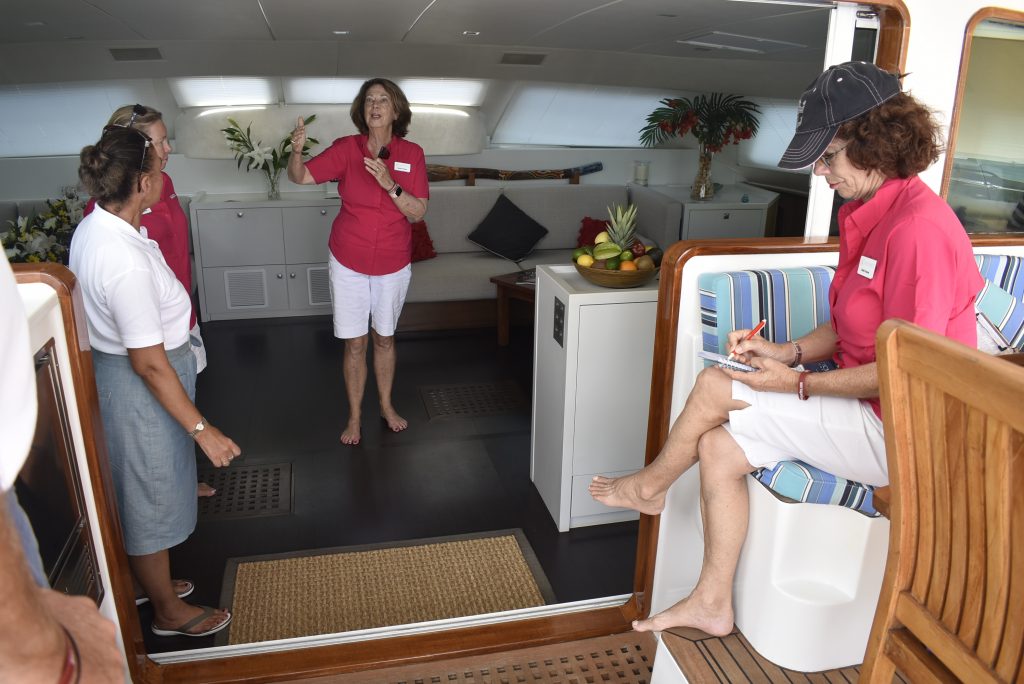 Bamboushay pottery mugs and an award for volunteer work decorated the main cabin of a 62-foot Leopard catamaran called The Big Dog, which was on display at the Nanny Cay marina for visiting brokers to board last week.

Crewmembers Ruth and Terry Ross have lived in the Virgin Islands for the past ten years after moving here from Ireland, and they could not imagine living anywhere else, they said.

When they lost their previous boat in Hurricane Irma, they decided to stay in the territory and help the yachting industry recover.

“We were determined to get back no matter what,” Ms. Ross said. “We didn’t have a job. We rented a condo here in Nanny Cay. We got involved in the volunteer work and eventually found work here. We were lucky that we didn’t have to change [our careers] too much.”

The two were among the crewmembers for nearly 50 boats that attended the 38th annual BVI Charter Society Show — the largest turnout since Irma. Of those, almost two-thirds are based in the Virgin Islands.

Brokers were invited aboard to view the yachts and meet the crew, asking questions about the services and special details that each has to offer in order to match the boats with prospective clients. Brokers act as agents who pair vacationers with their ideal boat and crew, tailoring packages to their wants and needs.

The BVI Charter Yacht Society hosted a spring show in May, where 21 boats and more than 40 brokers showed up.

The annual fall show, organisers said, is usually much larger and includes boats that were unable to make it to the spring show.

This show was Bobbi Fawcett’s first as a new broker for Regency Yacht Charters, but she is no stranger to the industry.

“[The crew] are all bright eyes and bushy tailed, and the boats are all sprayed and polished. When I was crew, that’s what you would do,” she said. “[Regency books] all around the world, but here it’s a very great place for charter because of the multitude of anchorage in close proximities.”

Wearing hot pink shirts, Ms. Fawcett and other brokers made their way around the marina, hopping on and off boats and chatting with the crews.

Many of the meetings were reunions that began with hugs and smiles from familiar faces.

This was often true for the Rosses, who have been in the yachting business for 15 years.

“[Yachting] is an industry that the roots spread out far across the territory,” said Ms. Ross, who is on the board of the Charter Yacht Society. “Every single thing that we do for the charter, it all has to come from within the community.”

The show began Wednesday night of last week with a general meeting, followed by yacht viewings last Thursday and the official opening of the show that same night.

On Friday, crews participated in a cocktail competition, and brokers did a “Yacht Hop” where they boarded participating yachts at night.

The show continued into the weekend with culinary contests, a farewell dinner and awards ceremony, and a post-show crew gathering.