The Youth Empowerment Project is set to become the first entity in the Virgin Islands to have an official grid-tie interconnection with the BVI Electricity Corporation, paving the way for …

END_OF_DOCUMENT_TOKEN_TO_BE_REPLACED 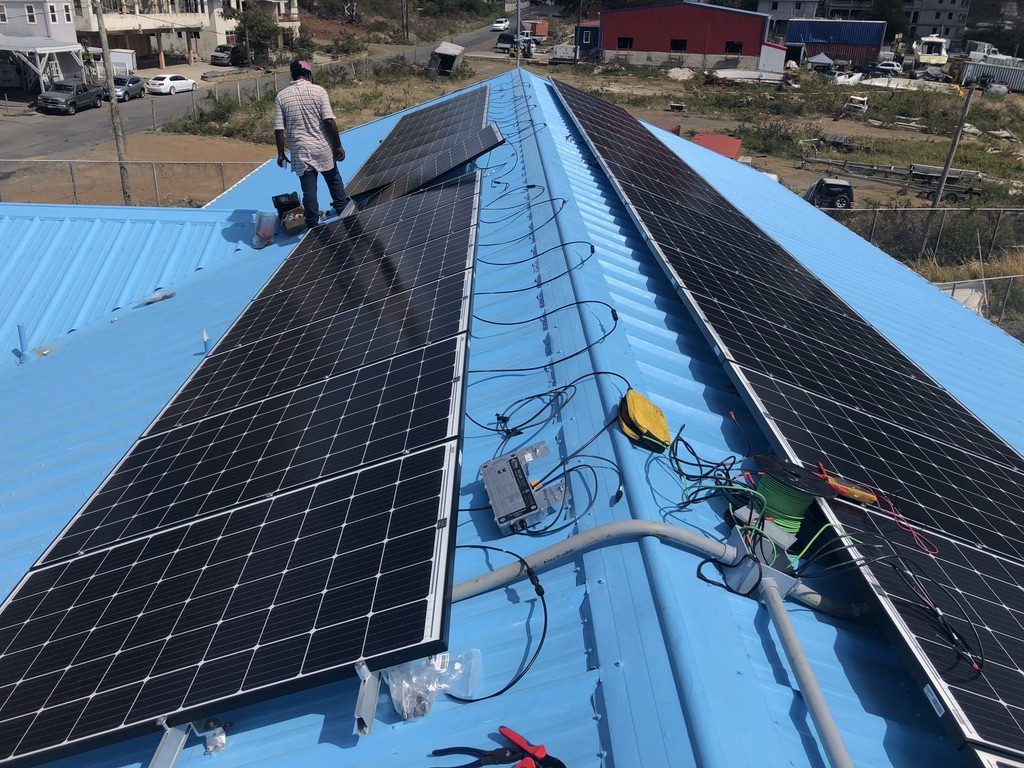 The Youth Empowerment Project is installing solar panels, but plans to feed the system’s excess energy into the electricity grid have had some setbacks. (Photo: ATEC)

The Youth Empowerment Project is set to become the first entity in the Virgin Islands to have an official grid-tie interconnection with the BVI Electricity Corporation, paving the way for more widespread use of renewable energy here.

On April 5 YEP, in partnership with Green VI and ATEC Power Engineering, submitted the VI’s first application for a grid-tie system, according to a July 4 press release.

Such systems use solar panels to generate electricity for onsite use while pushing any excess power back into the grid, spinning the meter backwards and lowering the electric bill.

The press release went on to state that there have been delays in getting the systems interconnected due to faulty parts and “a wait for the necessary Class E licence to be added to the govern- ment’s list of services.”

Dana Miller, head of ATEC Power Engineering, which sponsored the installation of YEP’s solar power system, explained that the new Class E licence is specifically for solar energy installations, and that YEP is waiting for the government’s Treasury to add the licence so that the department can create an account to accept payment for the licences.

He added that he has been assured that this step will come within the next week or two.

Unit Head Macgregor Williams said that to his knowledge there is nothing preventing someone from acquiring a Class E license as long as they meet the necessary qualifications.

In the meantime, YEP submitted another application to run a standalone solar system for now as the organisation works with Green VI, ATEC and the BVIEC’s Technical Unit to complete the interconnection.

While Mr. Miller is optimistic, and encouraged by the commitment of Green VI, the Recovery and Development Agency and the BVIEC, he said there remain barriers to solar grid-tie systems becoming economically and practically feasible in the territory.

When taking into account the costs of shipping and duty for the equipment, Mr. Miller estimates a “10-year payback” to recoup investment costs.

The payback period in the United States, he said, is typically less than four years.

“At this point in time, financially, it makes less sense to export to the grid than it does just to use the power in a non-exporting fashion within your own home,” Mr. Miller explained, adding, “My recommendation to people is to put in non-exporting systems, so that it’s not considered a grid-tie system. And so then you can still offset your energy usage.”

He added that he would like to see government take three steps to make grid-tied solar systems economically feasible.

The first would be lowering the duty rate on solar electric equipment and renewable energy equipment from 20 percent to five percent to “even the playing field” with backup generators.

The second would be to flip the “current tiered energy rate structure,” which charges consumers a lower rate the more energy they use, thus disincentivising energy efficiency and investment in renewable energy. Such as change, he said, would be “monumental.”

Finally, he would like to see a higher feed-in tariff to reduce the payback period on renewable energy investments.

“Right now, it’s very low, because of course they’re concerned about flooding the market,” he said. “Over time, I think they should start to raise that up.”

Mr. Miller predicts that the BVIEC eventually will raise the feed-in tariff as the low cost of solar energy actually benefits its bottom line.

“I think this is essentially opening the door, where you’re at a point where the BVIEC feels comfortable,” Mr. Miller said. “And then over time, we’ll see better and better economic payback periods.”

The BVIEC did not respond to requests for comment.

Charlotte McDevitt, Green VI’s executive director, said, “The whole point of this project is to use it to learn how it’s done, how it’s going to be done, and then to share that information with people.”

“The BVI government really need to look at duty-exempt solar systems or wind systems,” Ms. McDevitt said. “If they really are being serious about supporting renewable energy, they need to look at the fiscal tools that will support it.”

Mr. Miller added, “We’re at the very beginning of a journey that’s going to lead us to 100 percent renewable and which will benefit us greatly in terms of financial resiliency — and will reduce the amount spent on fossil fuel, which can go towards things like education, cultural centres, and the like.”

YEP Executive Director Stacy Mather said he is pleased with the progress in spite of the challenges.

“This project is an exciting one for YEP, as it pushes our green initiatives further along in a tangible way,” he said in the July 4 press release. “The installation process has been a journey, but a beneficial learning experience for our children.”