Adagio Dance School instructor Sasha Creque asked her student, 8-year-old Lyannah Turnbull, which acrobatic skill she would like to demonstrate. The girl, suddenly nervous, said she would do a forward …

END_OF_DOCUMENT_TOKEN_TO_BE_REPLACED 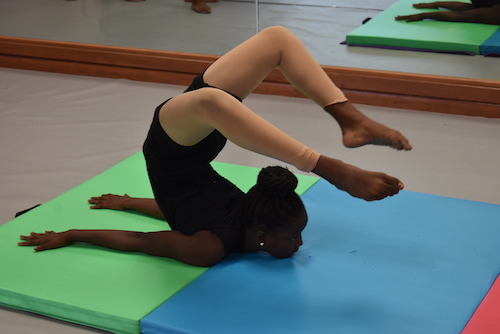 Adagio Dance School instructor Sasha Creque asked her student, 8-year-old Lyannah Turnbull, which acrobatic skill she would like to demonstrate.

The girl, suddenly nervous, said she would do a forward roll.

Ms. Creque shook her head and said that was too easy. She suggested a forward roll with a handstand instead.

Suddenly filled with confidence, the girl sprang onto the mat and pulled off the move. Her fellow students followed her, getting more creative at every turn, challenging each other to push themselves to the limit.

The acrobatic arts — one part dance, one part gymnastics — at Adagio Dance School in Fish Bay are all about new challenges for students and their instructor.

With their cartwheels, somersaults, Arabians, aerials and handsprings, the 20 students in Ms. Creque’s class are some of the first to be able to learn and perform such skills in the Virgin Islands, and Ms. Creque is among the first to be certified to teach them in the region.

Later, another girl performed a “chin stand,” lying flat on her chest and angling her legs over her head in what Ms. Creque called the class’s signature move.

The timing was right for the class, because acrobatics, or “acro,” has never been more popular, with artists leaping to victory on television series like “America’s Got Talent” and “So You Think You Can Dance.”

But until recently, Ms. Creque was primarily a ballet teacher. She said her interest in acrobatics started in 2014, when she encountered one of her students doing some unusual moves.

“[She was] stretching her body beyond her measure,” she said. “I’m like, ‘Okay, this is something that’s new to me. Let’s see what I can do to help this student and to groom her.’”

Ms. Creque decided to get certified to teach acrobatic arts through an international programme that certifies teachers to instruct students as young as 3, moving up through 12 different levels and over 350 different moves.

When Ms. Creque launched the class, she reported only a mild interest. But that all changed when she brought her students to perform at BVI DanceFest, where their moves impressed the crowd.

“When everybody saw what the girls were able to do, they were like, ‘I want my kid to do that. Can you show my kid how to do that?’”

She’s been steadily enrolling students throughout the summer.

“There were a lot of students because of Irma who were already enrolled in a programme but left the island,” she said. “They are coming back, but it’s slow.”

Still, students are fired up about the class, and she has high hopes for them.

“We are hoping to have a student complete all 12 levels,” she said.

They’re off to a good start. Earlier this month, the 20 students in the class took the first acrobatic arts examinations ever administered in the Caribbean region.

All of them passed, 16 with distinction, Ms. Creque said.

“When you think about acrobatics, you think of a circus performer,” she said. “You don’t think this could be a dance.”

She added that some acrobatics students have moved on to gymnastics as well.

“That’s what I tell my students,” she said. “You can be diverse in so many things; you just have to tap into the right channel to be able to explore it.”