Two formerly empty kiosks at the Cyril B. Romney Tortola Pier Park will be busy for the  rest of the year with young entrepreneurs selling drinks — lemonade for the …

END_OF_DOCUMENT_TOKEN_TO_BE_REPLACED 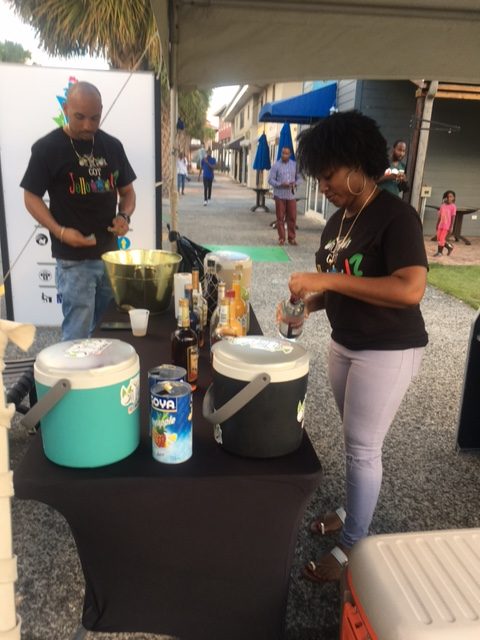 On the Rox bartenders mix cocktails at the Young Entrepreneur and Kidpreneur award ceremony on Friday at Cyril B. Romney Tortola Pier Park. The business and its owner, Robert Swain Jr., won the use of a park kiosk for the rest of the year. (Photo: CLAIRE SHEFCHIK)

Two formerly empty kiosks at the Cyril B. Romney Tortola Pier Park will be busy for the  rest of the year with young entrepreneurs selling drinks — lemonade for the kids and cocktails for the adults — after winning the Young Entrepreneur and Kidpreneur competitions
sponsored by the park.

Kaylee Smith of Island Flavours and Robert Swain Jr. of On the Rox received the keys to their kiosks on Friday at a family-friendly event with dance troupes, moko jumbies, and a fashion show featuring various TPP retailers.

Pier Park Operations Manager Zoe Walcott, who hosted the awards ceremony, said the competition included a Shark Tank-style pitch session as well as opportunities for each entrepreneur to feature their wares at TPP movie nights and other events.

The 10 finalists, who included makeup artists and cotton candy and cupcake makers, were all on hand at booths on Friday.

Shan Mohammed, past president of the Rotary Club of Central Tortola and managing director of Nagico Insurance, which both sponsored the competition, said the initiative will continue in hopes of encouraging and mentoring young entrepreneurs and ideally helping them find investors to scale up their businesses.

The questions he planned to tackle, he said, include, “How do you prepare the presentation? How do you do the sales pitch? And how do you account for your income and expenses, because we have seen even in adult businesses that a lot of persons or businesses do not account for the money properly.”

Even a small kiosk might seem like a big responsibility for an 11-year-old, but Kaylee, who beat out the other competitors in the Kidpreneur category, said she was ready for the challenge of serving up her natural and organic lemonades and slushies to park visitors.

“I decided to not just do
lemonade myself, but to add island flavours from this beautiful
island,” she said. “Some of the flavors that I do use are passionfruit, watermelon, black and blueberry, and so much more.”

According to Ms. Walcott, Ms. Smith impressed the judges by repurposing the lemonades she had on hand to create new offerings, such as slushies, eliminating the need to raise any additional capital.

According to CrewCenter.com, more than a dozen cruise ships are scheduled to dock at the pier before the year is up, meaning the young entrepreneurs should have their share of customers now that ships have returned to the territory.

“We want to see young people in the British Virgin Islands having an opportunity to grow their businesses and perhaps even take them internationally,” Mr. Mohamed said, adding, “So I think it’s a wonderful initiative.”