During the historic first session of the second Virgin Islands Youth Parliament on March 11, young representatives drew on extensive research as they shared their hopes for the territory’s future …

END_OF_DOCUMENT_TOKEN_TO_BE_REPLACED 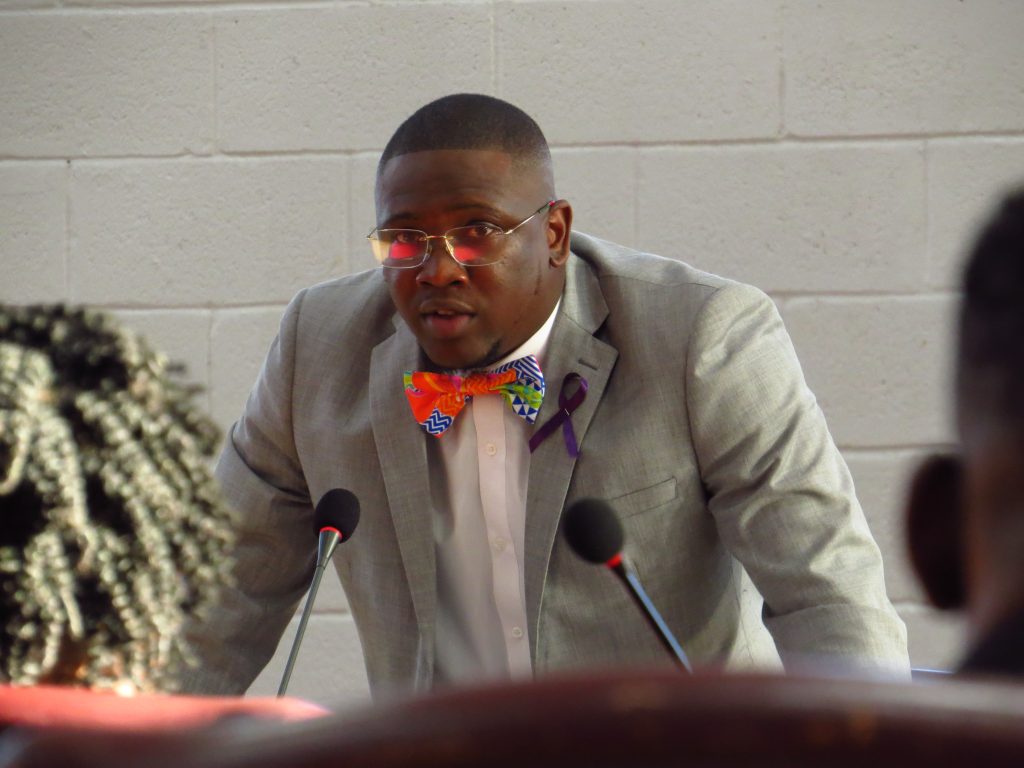 Virgin Islands Youth Parliament Opposition Leader Kevon Lettsome contributes to the debate on self-determination at the body’s first sitting March 11 at the Save the Seed Energy Centre. (Photo: DANA KAMPA)

During the historic first session of the second Virgin Islands Youth Parliament on March 11, young representatives drew on extensive research as they shared their hopes for the territory’s future while debating the merits of self-determination for the VI.

Their voices joined an ongoing debate that intensified starting last July when members of the House of Assembly approved a review of the 2007 Constitution.

At the time, Premier Andrew Fahie referenced the political groundswell that Anegada resident Theodolph Faulkner helped generate in the late 1940s when petitioning for Virgin Islanders’ rights to lead their own affairs, make their own laws and policies, and manage their own government spending.

On March 11, the young parliamentarians similarly drew on the territory’s history and their own experiences growing up in the VI as they debated self-determination during their meeting at the Save the Seed Energy Centre.

With several HOA members watching from the wings, the parliamentarians took turns voicing their positions. The government side backed a free association-based approach to self-determination for the territory, and opposition members detailed concerns about moving forward without implementing measures like comprehensive community outreach to educate residents about the pros and cons.

But in the end, all 13 voting members leaned in favour of pursuing full self-determination.

Members of government began by stressing the importance of defining exactly what the territory wants.

They identified three paths to the VI gaining more control of its own affairs: free association, integration, and independence.

“It is our duty as youth parliamentarians to clearly express our vision of the future of the Virgin Islands and share our structured plans,” said VIYP Premier Kevin Fahie, who is also the body’s finance minister. “Only then can our people make an informed decision. … The United Nations defines [self-determination] as the right of a people to determine its destiny — a right we continue to work for and so justly deserve.”

Mr. Fahie and his government colleagues favoured free association, which would give the territory more powers like making legislative decisions but would allow the VI to still maintain a relationship with the United Kingdom.

In arguing for this arrangement, parliamentarians noted the governor’s delays in assenting to recent bills including the Cannabis Licensing Act, 2020, which passed the House at the end of last June, and the Disaster Management Act, 2019, which passed in January.

The latter would shift some responsibility for disaster response from the governor to the government.

Members were candid about some areas they believe would need improvement to give the territory a strong foundation from which to grow, including social support and financial stability.

However, they argued that these needs shouldn’t deter the territory from seeking self-determination.

In fact, they said, the VI has been on the path to that goal for 70 years, since the restoration of the Legislative Council.

“We are at a critical point in our Virgin Islands story, and we cannot sit by and watch the UK be chief author and publisher of that story,” said VIYP Deputy Premier Bria Smith, who is also the body’s minister of health and social development. “We must exercise our right to determine our own political destiny for future generations to come. One of the most important ways for us to do so is through the development of an appropriate, well-thought-out framework which takes account of the need to continuously adjust to change.”

Ms. Smith said important first steps include reforming the National Health Insurance system to be sustainable, and implementing stronger measures for protecting marginalised groups such as people who are homeless or mentally ill.

VIYP Junior Minister for Trade and Economic Development Mia Leonard supported such measures and spoke of a need for economic independence as the territory seeks greater autonomy. She said an essential element to autonomy is having the ability to decide how the territory’s money is spent.

VIYP Opposition Leader Kevon Lettsome recommended that the VI work toward self-determination but take the time first to thoroughly engage with residents and address social issues.

He pointed to the importance of a referendum strongly backed by the community for gaining more autonomy.

“If we are serious about a status change for our Virgin Islands, we have to educate, we have to be the voice for the voiceless,” Mr. Lettsome said. “The route to self-determination as I see it is to consult with the people of the Virgin Islands, hold public meetings with all people throughout the territory, present all the options we have at our disposal, and educate ourselves on the advantages and disadvantages of each option.”

His opposition colleague Shammah Tittle added that recent allegations of corruption in the territory don’t speak to the VI he loves, and he said it is essential to solidify a sense of unity in the community and bridge social divides before moving forward.

He also highlighted the need for reform on issues that will affect Virgin Islanders for years to come. He recalled that his history lessons in school included some regional information about the Caribbean, but he said curriculums need to be reworked to more prominently feature the territory’s history so future generations can understand how far the VI has come and further that progress.

After the sitting, HOA Junior Minister for Tourism Sharie de Castro commended the debate as “an excellent demonstration of young Virgin Islanders taking keen interest in issues concerning the territory.”

“I believe they were fearless for stepping out of their comfort zone to demonstrate their passion for their home,” Ms. de Castro said in a statement on March 12. “I sat and watched in awe as our young people demonstrated excellence during each contribution. I couldn’t be more proud, and I am confident that the future of the Virgin Islands is in good hands.”

Premier Andrew Fahie offered a few remarks at the beginning of the sitting, welcoming the young adults to parliament.

“Tomorrow is definitely going to be better based on the seeds we are planting today,” Mr. Fahie said.

Government initially established the Youth Parliament programme in 2015, providing participants the opportunity to practise governance. It was recently revived, and the second parliament was sworn in last October.