A doleful trumpet carried out over the burial grounds at Cappoons Bay before family members and government leaders laid a trio of yellow, blue and purple flower wreaths at the …

END_OF_DOCUMENT_TOKEN_TO_BE_REPLACED 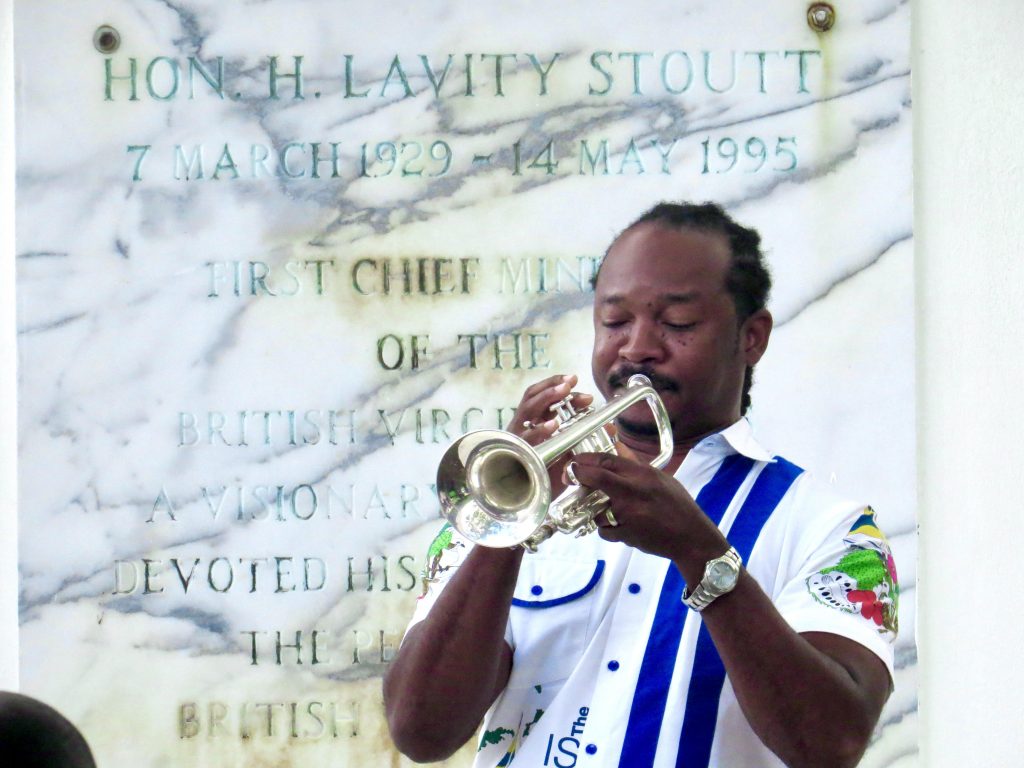 A doleful trumpet carried out over the burial grounds at Cappoons Bay before family members and government leaders laid a trio of yellow, blue and purple flower wreaths at the headstone of Hamilton Lavity Stoutt as part of the annual public holiday celebrating his birthday.

But sporadic showers Monday morning quickly gave way to lively dance, stories of the education system’s past shortcomings, and hopes for realising the vision that the territory’s first chief minister championed.

Mr. Stoutt is perhaps best known for his namesake school, H. Lavity Stoutt Community College. Historians also extolled the strides he made in improving secondary education systems, blazing his way forward as a 28-year-old politician elected to the Legislative Council who went on to be the longest-serving Caribbean parliamentarian at the time of his death in 1995. He also helped lay the groundwork for the territory’s financial services sector.

But speakers made it clear they weren’t simply celebrating Mr. Stoutt’s accomplishments. Dr. Richard Georges, now the president of the college and the territory’s first poet laureate, proclaimed that he and fellow community leaders were realising the vision of a nation empowered by education.

“The question I have for the college, for my colleagues, and for every citizen and resident in the territory, for ourselves, is ‘Have we dreamt big enough?’” Dr. Georges asked. “Have we fallen victim to limitations that we impose on ourselves? Are the chains and shackles on our mind of our own design?”

The day started with an intimate memorial ceremony at the burial grounds, where attendees wore territorial clothing of red, blue and white.

“The honourable H. Lavity Stoutt was of the mindset that music was a form of education, which created a better person,” she said. “He paved the way for the music education programme at the then-BVI High School.”

Mr. Braithwaite was one of the students who benefited from the programme, and he now oversees the senior school’s music and visual arts. He was one of many artists to share their creative talents that afternoon.

Organisers also recognised the efforts of VI students to learn more about the history of Mr. Stoutt.

“Young people have to bring this thing forward,” Dr. Wheatley said. “Let’s not be shy to include them, because we won’t be here forever. If we want H.L. Stoutt’s legacy to live forever, it will have to live through the young people.”

Keynote speaker Beverly Hodge-Smith, a former personal assistant to Mr. Stoutt and the HLS Commemorative Celebrations Committee deputy chair, said it is important for VI history to be more prominently featured in school curricula so the new generation understands how far the territory has come and where it can go.

She offered a candid view of the past, describing the mental anguish of students who strove for success in entrance exams but were denied secondary education because facilities lacked space. Some bright students later struggled to attain tertiary education because they didn’t have the resources to leave the territory and seek it elsewhere, she explained.

“Mr. Stoutt long waited for that day when he could bring about the much-needed changes not only in the economic development of this territory, but to a very flawed education system,” she said. “He, from his own experience and that of others, would have been aware of the many flaws in the education system and the disadvantage experienced by many throughout the territory.”

Though he faced harsh judgement when first pursuing plans to build the community college, she said many former critics grew to realise the institution’s value in empowering residents to both learn and find ways to give back to the community.

“This territory has been blessed to have a visionary like H. Lavity Stoutt as its leader,” she added. “My hope is that the great work that he has done for this territory will be enshrined in the hearts of many generations.”