In the next few years, there could be a crisis among some of the youths of Virgin Gorda, according to Glenn Permuy, senior vice president of the Boys & Girls …

END_OF_DOCUMENT_TOKEN_TO_BE_REPLACED 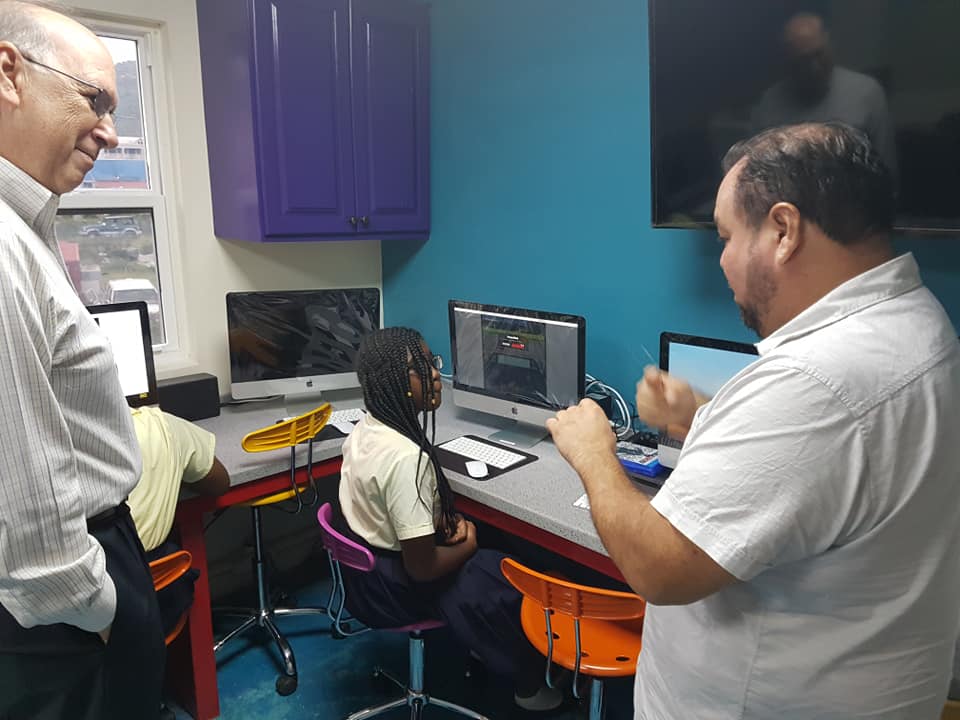 Glenn Permuy (left), senior vice president of the Boys & Girls Clubs of America, and Jose Cruz, director of international support for the organisation, visit students at a Youth Empowerment Project computer lab during their consulting visit to the territory last week. (Photo: PROVIDED)

In the next few years, there could be a crisis among some of the youths of Virgin Gorda, according to Glenn Permuy, senior vice president of the Boys & Girls Clubs of America.

“When children grow up, they either join a good gang or bad gang,” he said from behind a desk in the East End headquarters of the Youth Empowerment Project.

And YEP, after 11 years of educational programming and support, has been around to ensure that the “good gangs” win out for children of the Virgin Islands.

“People talk about the expense of [the programme], but what I tell them is if you don’t invest in children while they’re young, the cost will be much higher down the road” in terms of school dropouts and funding the criminal justice system, Mr. Permuy explained.

It’s for that reason that YEP has been trying to figure out how to expand to the sister island, whether by identifying an existing building or securing a donation, explained Executive Director Stacy Mather.

Boys & Girls Clubs
It’s a tough road ahead, which is why the organisation has enlisted help from two experts from abroad.

In August, YEP was accepted as an international affiliate of Mr. Permuy’s organisation. The Boys & Girls Clubs of America is a 158-year-old United States-based organisation that has become synonymous with youth development, with 4,000-plus affiliate clubs serving more than four million children, and affiliate clubs in Haiti, Jamaica and elsewhere around the world.

YEP’s founder and primary sponsor, Dr. Henry Jarecki, is a native of Asbury Park, New Jersey, and the Boys & Girls Club there agreed to sponsor the VI organisation. Under the agreement, YEP gains access to BGCA’s programmes, assessment instruments, online training and other tools.

Mr. Permuy and Jose Cruz, director of international support, visited the VI last Thursday and Friday to train staff, meet with students and offer ideas for the future.

“We don’t dictate,” Mr. Permuy said, adding that the organisation doesn’t offer additional funding either. “What we offer is years of experience and expertise. Our observation is that they do a great job, but there are always more children that need the services. Everybody can’t come to this site [in Fat Hogs Bay].”

YEP has been especially strained over the past year by the shift system at the territory’s secondary schools, which leaves many students unoccupied for part of the day. Fights and vandalism have resulted in some areas.

“We want to have those students in educational programming rather to have them hanging out down by the Pier Park with nothing to do,” Mr. Mather said.

Many BCGAs in the US meet on school grounds, but the space squeeze after Irma has left that all but impossible.

That’s why one idea on the table is launching “community impact sites,” using churches or other buildings that already exist in West End and Road Town.

YEP has already launched a pilot programme with the BVI RedCross to offer programming to 20 teens a day, three days a week, out of the BVIRC headquarters.

“We are considering all possibilities,” Mr. Mather added.

Larger board?
Another of Mr. Permuy’s recommendations is to expand the board, in part so that more community members will be advocating for YEP.

“The more people out there telling the story of YEP, the better,” he said.

Other ideas include an annual awareness event to further spread the news about YEP, and pursuing a partnership with education students at H. Lavity Stoutt Community College to come in and work with children at YEP.

Although YEP already has a bus to transport students to offsite activities, an additional vehicle would allow for more mobility as well.

Mr. Permuy explained that his organisation tends to categorise affiliates as Level One or Level Two. In order to reach the second status, YEP, which has served almost 2,000 children since its founding in 2007, needs to expand to serve even more.

“It’s not unique,” Mr. Permuy said about the funding issues. “No matter where I travel, … money is always an issue. Money fuels the things you can do to help children. You’ve got to have great staff; you’ve got to have a location to do it in; you’ve got to have equipment and supplies, and then somebody’s got to pay for the lights and the water, … and that’s expensive.”

Sponsors sought
Although Dr. Jarecki continues to remain a primary sponsor, Mr. Permuy advocates expanding the donor base to ensure it is sustainable over the long term.

He has already met with members of the media and government, and worked on contacting alumni so they can help further spread the word.

On Friday, Mr. Cruz was busy training staff on-site. And last Thursday, the pair met with board members to talk about future possible expansions.

In a 2016 survey, 90 percent of YEP participants said they “felt safe” at YEP, while just 50 percent said they felt safe at home, according to the organisation.

This statistic proves that YEP is already on the right track, Mr. Permuy said.

“The plan is to determine how we can help Stacy and his board to serve more kids, serve them more often, and with a greater impact than they’re already having,” he explained.