N’Khoy Stoutt listened intently as Akeem Lennard described his business. “Glass makes up 15 percent of our waste stream right now and it takes over 2,000 years for glass to …

END_OF_DOCUMENT_TOKEN_TO_BE_REPLACED 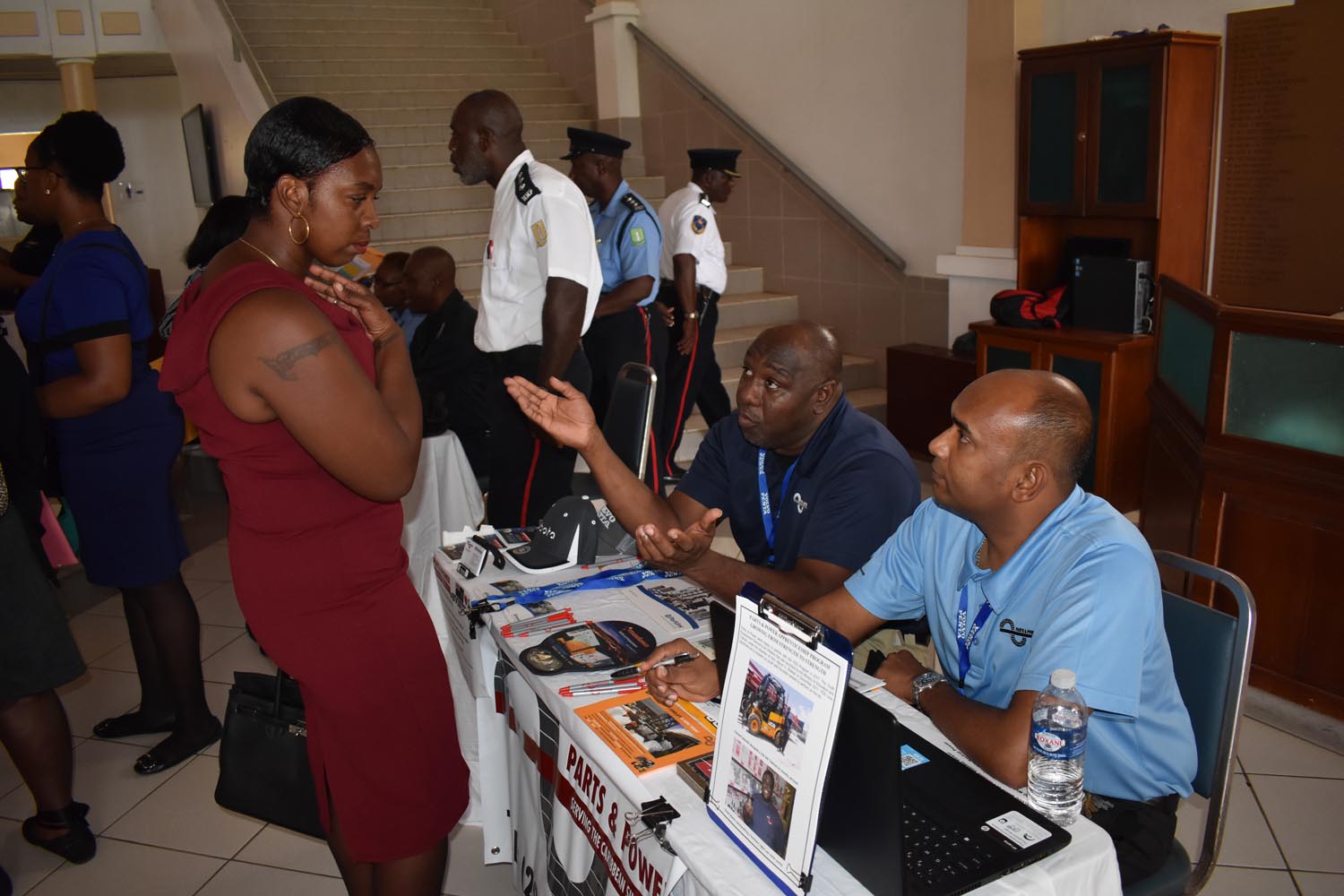 “Glass makes up 15 percent of our waste stream right now and it takes over 2,000 years for glass to break down into the environment,” explained Mr. Lennard, the owner of Greencrete BVI. “So by us incorporating glass into our products, … it’s diverting a resource from going to the landfill and turning it into something primary and giving it new life.”

“If you have masonry skills, that’s perfect for me right now,” he explained. “Most of the work we do is concrete.”

Mr. Lennard was one of the 20-plus potential employers who set up a booth and talked about his company to droves of young people at the Youth Employment Service’s job fair and expo on June 20.

Mr. Stoutt, an already-employed construction worker who graduates from H. Lavity Stoutt Community College this month, said he didn’t actually need a new job. He still attended, however, to scout potential offerings and get information about businesses like Mr. Lennard’s.

“I was here [to talk to people] in the technical fields, because I’m not an office work type of guy,” he said. “I really found Greencrete’s premise of renewable sources — as in using glass as a substitute within the concrete — I found that interesting.”

Some 75 young people attended the HLSCC-based fair, according to Dr. Janet Smith, the college’s president.

Of those participants, Mr. Stoutt was in the minority: About 90 percent were unemployed youths registered with YES, explained Rochelle Lawrence, the programme’s coordinator.

Launched in 2011 by Education and Culture Minister Myron Walwyn, YES aims to equip the territory’s young people with the skills needed to succeed in the workforce.

Some of those skills were honed during the lead-up to the expo.

“[YES registrants] went through a number of workshops and trainings such as resume building, how your attitude determines your altitude, understanding corporate culture, dressing for success,” Ms. Lawrence said, adding that organisers also partnered with HLSCC for a customer service workshop.

One hundred and nine unemployed young people between the ages of 18 and 29 are currently registered with the programme, according to the coordinator, who noted that it has seen its numbers balloon in the months after Hurricane Irma.

Getting in the door

One of those registrants is Janikwa Riley, a 19-year-old HLSCC student who attended the job fair on June 20.

Ms. Riley was thankful for the expo experience but expressed disappointment about the lack of employment opportunities offered by the attendees.

“I had problems finding jobs that [relate] to my interest, which is culinary arts,” she said. “I found maybe one or two, but it wasn’t for sure. But it was very nice. Some of the presentations were very good.”

YES registrant Kailisha Destouche, a 19-year-old HLSCC student who was hoping to secure work in accounting or customer service, agreed.

“Most of them didn’t have openings,” she said.

Still, employers maintained that they were looking to hire. Mr. Lennard’s company currently employs five people, and he said he was looking to bring on four more.

Joanna Morris, the people and welfare manager for Necker Island, recorded the contact information of dozens of expo participants.

Managers planned to shortlist that index and invite some back for second interviews for open positions, explained Lisa Redfern, the resort’s guest services and operations training manager.

And others might be offered opportunities in the coming months, Ms. Morris added.

“We’re hoping with a lot of people that don’t have experience but are interested in getting involved in the industry, when we are open and we’ve got big events — like the Necker Cup, which will be in November — where we need more hands, it might be something where we can bring in those people who we’ve flagged,” she said.

“They talked to me a lot about my career and where I want to be, so it’s a great spot to be in,” he said. “It’s a great opportunity.”

Ms. Lawrence maintained that the fair has a proven success rate of matching young people with jobs.

Some youth facing the week-to-week challenges of looking for work, however, weren’t as optimistic.

YES registrant Shaquille Bell, a 20-year-old HLSCC student, said trying to land a good job in the territory as a young person had been a daunting task.

“It’s been tough because most people who are looking to hire want experience and they ain’t really looking to train,” said Mr. Bell, who hopes to work in the information technology field. “It’s tough on us because they always saying they trying to help the youths, but every time the job come up it’s for experience of ten years.”

He and Mses. Riley and Destouche all said they likely will have to leave the territory to get the experience necessary to work in the Virgin Islands.