They started at 5:30 a.m. Two hours later, they had collected nearly 100 bags of garbage. Seventeen members of the EarlyAct Club of Ebenezer Thomas Primary School worked with eight …

END_OF_DOCUMENT_TOKEN_TO_BE_REPLACED 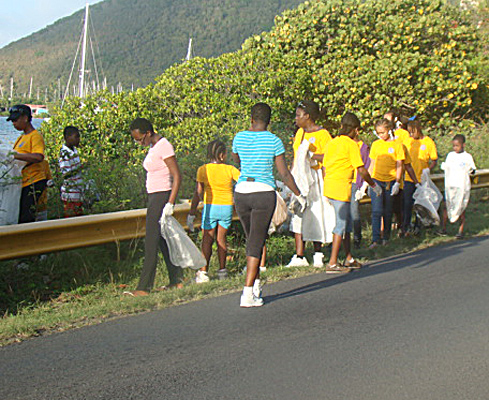 Seventeen students participated in a recent cleanup in Sea Cows Bay in an activity hosted by the EarlyAct Club of Ebenezer Thomas Primary School. Photo: PROVIDED

They started at 5:30 a.m. Two hours later, they had collected nearly 100 bags of garbage.

Seventeen members of the EarlyAct Club of Ebenezer Thomas Primary School worked with eight teachers and parents to clean up the stretch of road between the Sea Cows Bay school and Duffs Bottom on May 4.

The garbage included several hundred beer bottles, cans, polystyrene, plastic bags and a television, according to the Rotary Club of Road Town, which oversees the youth service organisation.

“It is incredible just how much garbage people throw away at random, which is unsightly and unhealthy,” said EarlyAct Club President Leah Smith.

Teacher Monette Smith added, “People need to take their garbage home and not just throw it out their car windows; in some cases we collected sacks of garbage people had just thrown on the side. We must learn to take care of our environment.”

Afterwards, participants attended a breakfast organised by staff and parents at the Queen Elizabeth II Park.

The cleanup was the club’s second: earlier in the year, members cleaned the roadside from the school to Nanny Cay.

The organisation, one of three EarlyAct Clubs in the Virgin Islands, was chartered in November under the sponsorship of the Rotary Club of Rotary Town.

The clubs, whose members are children of primary school age, seek to develop leadership skills and encourage personal development, according to Rotary.