DDM partners with US recovery firm

END_OF_DOCUMENT_TOKEN_TO_BE_REPLACED 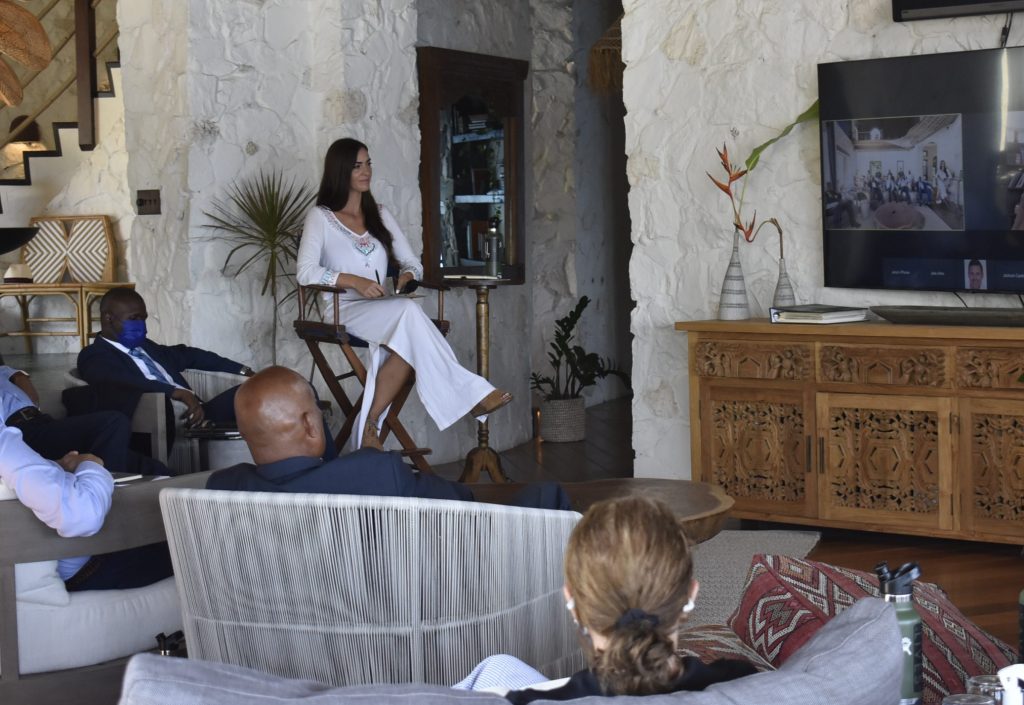 Government officials and other stakeholders meet last Thursday during a resiliency summit on Buck Island hosted by the United States-based emergency management firm Aerial Recovery Group, which is headed by real estate developer Britnie Turner, who is seated at centre left in the above photo. (Photo: ZARRIN TASNIM AHMED)

A “resiliency summit” was held last week on Buck Island as part of a new memorandum of understanding between the Department of Disaster Management and the United States-based emergency management firm Aerial Recovery Group.

The agreement — which has not been made public — will support the territory’s emergency preparedness and response programmes in part by connecting DDM with non-governmental organisations willing to help, according to ARG Founder Britnie Turner.

From March 27 to Friday, government officials and representatives of nonprofit organisations met during a series of panels that ARG hosted on the island.

“We are coming alongside the DDM to really undergird them,” Ms. Turner explained. “In the case of a disaster, we want to be able to help them, so we pre-know their plan and send help as needed.” Ms. Turner, a Tennessee-based real estate developer, came to the Virgin Islands in 2017 after Hurricane Irma and created a ten-part documentary on the recovery process.

The experience inspired her to form ARG, according to the firm’s website, which notes that the group has since carried out work after hurricanes last year in Honduras and Louisiana.

Ms. Turner also has become involved with Buck Island off Tortola. Though she declined to elaborate on her association with the property — explaining that she wanted this Beacon article to focus on last week’s summit — an Aerial-branded website advertises upcoming summits there with themes including “Abundance,” “Presence,” “Strength” and “Dream.”

Ms. Turner, a former Miss North Carolina, is listed as a “keynote speaker” at each. Last week’s summit — which ARG representative Rachelle Savoia said was funded entirely by ARG — focused on resilience.

Last Thursday, several VI government officials attended, and Ms. Turner led a discussion and asked them questions relating to recovery in the aftermath of hurricanes Irma and Maria.

When she asked Police Commissioner Michael Matthews what went wrong and what lessons he learned, he had a long list to share.

In addition to a struggle with communication, police officers had to “get back on the streets quickly” to respond to widespread looting in the territory, he explained.

“We only managed to track down 40 percent of officers,” he said. “The devastation being what it was, the opportunities for the minority to take the law into their own hands and start looting began very early. We had to make some very difficult calls.”

The summit also included representatives of organisations like the VG Resilience Team, VI Search and Rescue, Convoy of Hope, Lift Up, World Central Kitchen, American Red Cross, Food for the Poor, Charity Water and others, according to Ms. Turner.

Ms. Turner called the summit a “giant networking tool” used to “create partnerships” by bringing “the greatest minds across the planet to help solve issues.” Five panel discussions were held throughout the week, including the resiliency panel last Thursday, she told the Beacon.

Others included a first-response panel, an emergency relief panel, a recovery management panel, and an innovative redevelopment panel.

“It was awesome how many people joined this week to share what are the best practices in resilience over the past 40 years,” Ms. Turner said.

She also announced that the group is making a disaster resiliency book this year compiling knowledge accumulated through projects and meetings.

The recovery group is one of five branches of Aerial Group, which is based in Tennessee. The group, which Ms. Turner established in 2009, also includes Aerial Development, Aerial Produced, Aerial Properties, and Aerial Global Community. In the future, Ms. Turner told the Beacon, ARG will respond to any VI disaster from Buck Island.

Efforts to obtain the firm’s MOU with the government were not successful as of Beacon press time yesterday.

DDM directed requests for the agreement to ARG, but Ms. Savoia said it is up to DDM to make the document public since the group isn’t familiar with the protocols for such documents here.

The document is not posted on the DDM website with other MOUs the agency has signed, and attempts to interview the DDM director were not successful.

This article has been amended to correct inaccurate information provided by summit organisers, who initially stated in error that Unite BVI was represented at the event.