Across the world last week, people celebrated Queen Elizabeth II’s 70 years on the throne, and the Virgin Islands was no exception. Dressed in uniforms, dresses, suits and hats, about …

END_OF_DOCUMENT_TOKEN_TO_BE_REPLACED 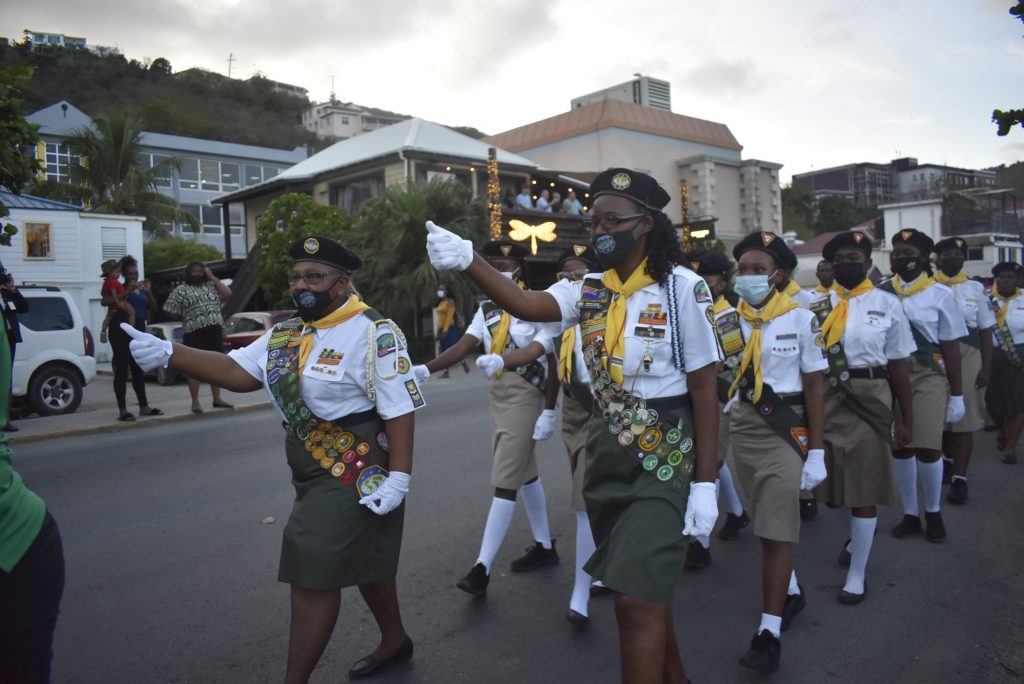 Across the world last week, people celebrated Queen Elizabeth II’s 70 years on the throne, and the Virgin Islands was no exception.

After a parade marching down Waterfront Drive from around 6:30 p.m., the ceremony kicked off with an inspection of officers by Governor John Rankin.

Following the inspection was a march past by the Royal Virgin Islands Police Force, which marched in slow and quick time, and a drill by the VI Cadet Corps.

“The Queen ascended to the throne in 1952 and her coronation took place on this day, the second of June, in 1953 in Westminster Abbey when she was just 25,” Mr. Rankin said while giving a speech. “Today, we celebrate Her Majesty’s Platinum Jubilee and the longest-ever reigning monarch in British history.”

He added that she visited every overseas territory in the Commonwealth, including visits to the VI in 1966 and 1977.

“In her 70 years as monarch, she’s served during times of war and of peace, during huge economic and social change, during good times and bad times,” he said. “But she has never wavered from her duty and particularly from her support for so many voluntary organisations such as those I’m pleased are represented here tonight.”

Mr. Rankin added that the Queen has transcended politics and geography, and touched the lives of millions of people across the world.

The celebration, the governor said, was also for public service workers and civic organisations who have also dedicated their lives to service.

He handed out medals for long service and good conduct to members of the RVIPF, BVI Fire and Rescue Services, Her Majesty’s Prison, the BVI Health Services Authority emergency medical unit, and Virgin Islands Search and Rescue.

He and Premier Dr. Natalio “Sowande” Wheatley also planted a cedar tree together at the park.

Also during the ceremony, one of more than 3,000 beacons globally were lit in the park. All of the beacons around the world were lit at 9:45 p.m., following tradition.

In 1897, beacons were lit to celebrate Queen Victoria’s Diamond Jubilee. In 1977, 2002, and 2012, beacons were set aflame to commemorate the silver, golden and diamond jubilees of Queen Elizabeth II.

Last Thursday was also the premier’s birthday, as the master of ceremonies noted.

Dr. Wheatley said the day was also special because 45 years ago his grandfather, the late then-Chief Minister Willard Wheatley, hosted the Queen and Prince Philip in the VI.

“I’m proud to honour the legacy of the strong bonds of friendship between Her Majesty the Queen and the people of the Virgin Islands,” he said during a speech.

Dr. Wheatley also noted that there have been great transformations in the past 70 years globally, and said that the fact that the monarchy has survived throughout the changes is a testament to the Queen’s leadership.

“Her Majesty is indeed a very positive role model for aspiring leaders, and in particular women and girls,” he added. “People around the world, the lesson we can learn to keep us inspired is that no matter how daunting the task, once you have done your preparation and you’re confident in yourself, press forward in your determination.”

A large crowd gathered around Buckingham Palace the same day as the Queen waved from the balcony.

She was largely unseen during other Jubilee celebrations in the UK, however, news outlets reported.