Hurricane season began last week, bringing with it the first named storm of the year. The system that became Tropical Storm Alex on Sunday killed three people in Cuba, flooded …

END_OF_DOCUMENT_TOKEN_TO_BE_REPLACED 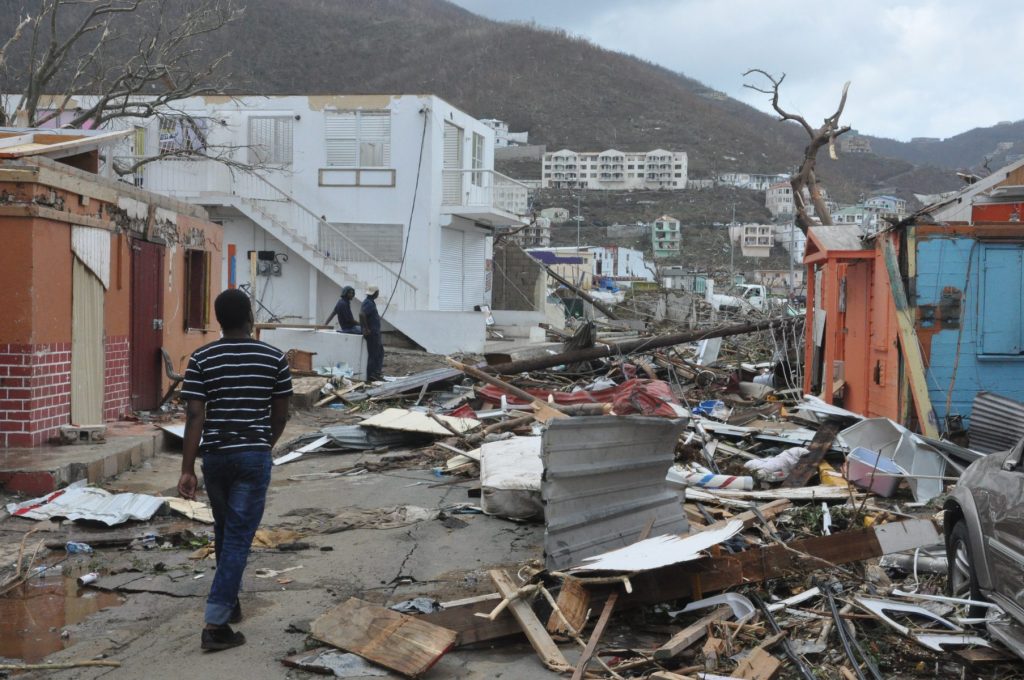 In 2017, the Category 5 Hurricane Irma destroyed much of the territory, including Main Street, above. Leaders are warning residents to prepare in case of a similarly powerful storm this year. (File photo: Freeman Rogers)

Hurricane season began last week, bringing with it the first named storm of the year.

The system that became Tropical Storm Alex on Sunday killed three people in Cuba, flooded parts of Florida, and brushed Bermuda before dissipating over the Atlantic Ocean on Tuesday.

Here in the Virgin Islands, leaders are warning residents to prepare for more.

“For the seventh consecutive year, forecasters advise that this season will bring above average levels of storm activity to the region,” Governor John Rankin said on June 1, the first day of the hurricane season.
This year, meteorologists from Colorado State University are predicting 19 named storms, nine of which are likely to develop into hurricanes, with four classed as “major.”

“I am sensitive to the fact that for many in the territory, Covid and recent events may make it more difficult to devote the required time and effort to plan and prepare for a possible storm im- pact,” Mr. Rankin added. “However, these tasks need not be taken on your own.”

Instead, he urged residents to speak to colleagues, friends and neighbours about how they can work together to protect each other “before, during and after” storms and other hazards.

Meanwhile, he said, the public service is carrying out its annual readiness assessments to make sure that each government agency can continue to provide essential services throughout the hurricane season.

“This year, in an effort to minimise any gaps in access to food, shelter, fuel, building materials and communications service, businesses from those critical areas of the private sector have been invited to join the readiness assessment exercise,” he said. “The Department of Disaster Management is providing technical support and guidance to those businesses to help to im- prove their emergency operations
and contingency plans.”

Outside the territory’s borders, he added, the United Kingdom’s Foreign, Commonwealth and Development Office and the Caribbean Disaster Emergency Management Agency have reiterated their commitment to providing support in the event of a major disaster.

“With the memories of what we faced five short years ago still fresh in our minds, I urge all of us to recall what we learned during the fateful 2017 season and since,” he said. “Whatever you wish you had done then, rally your families, coworkers, villages and communities and do it now, because together we can be ready.”

Though much of the government’s Irma recovery has been delayed by a lack of funding, Dr. Wheatley highlighted the progress that has been made, including rebuilding roads, public buildings, and reservoirs.

“Please do not let that progress fall by wayside,” he said. “Rather, let’s do all we can to support our family and community.”

To that end, he urged residents to review and update emergency plans and supply kits.

“Now is when we should take steps to protect property by inspecting structures, shoring up homes and businesses where needed, and removing hazards from around the exterior,” he added. “For those who are able, now is also the time to identify vulnerable members of our extended families or villages to see what assistance may be needed.”