In their Words: Melvin Jeffers

Mr. Jeffers, acting deputy fire chief and station officer, recently won the Red Cross Medal for Service and Bravery for helping an injured officer get to safety during Hurricane Irma. …

END_OF_DOCUMENT_TOKEN_TO_BE_REPLACED 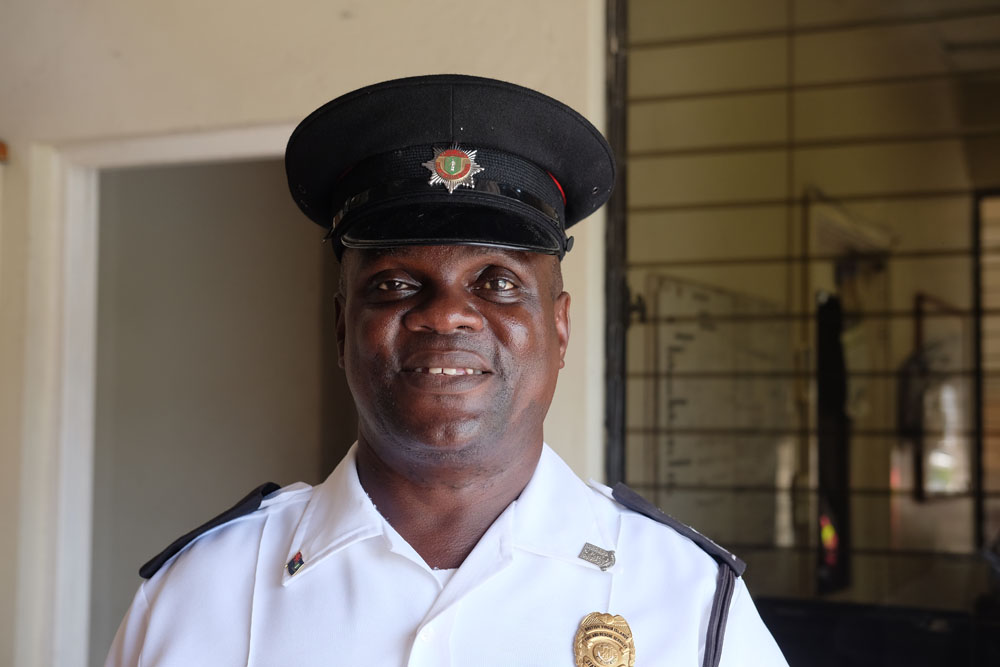 Mr. Jeffers, acting deputy fire chief and station officer, recently won the Red Cross Medal for Service and Bravery for helping an injured officer get to safety during Hurricane Irma. The following are his words, condensed and edited by Amanda Ulrich.

I received a Red Cross medal. About 20-something persons got it. Two of us from the fire department received that medal for the work that we did. The other person was Elnathan White from Anegada. He got his because he was one of the only officers on Anegeda, and he helped many people there.

I got mine [for] rendering assistance to a fellow officer through the storm. I was in the Department of Disaster Management office dealing with the communications and other things. We got rescued by [Communications and Works Minister Mark] Vanterpool and while we were moving back and forth with Mr. Vanterpool to his house a piece of galvanised came and hit one of the officers and cut him.

I didn’t see it at the time, so when they told me I asked to see the officer, and when I saw the cut I said, “He can’t stay here.”

I got a towel to press on him, and we walked up the hill and down to [Peebles Hospital], and I just turned my back to the wind so he was guarding me and I was guarding him.

It was kind of bad, because he ended up getting 11 stitches on his left side. I was praying that he didn’t cut his main artery. But everything went okay afterwards. We stayed at the hospital until the hurricane was over.

After, I went back up by [Mr. Vanterpool’s] house to check for the other officers and I realised everybody was okay. We also went to check on the Governor [Gus Jaspert] and [Premier Dr. Orlando Smith’s] house to make sure everything was okay.

After everything was good we all came down and came to the fire station. I was coming alongside the road and I saw how the place is. All the time I always hear about these storms in Japan, Texas and other places, but I’ve never seen it like this on Tortola.

When I saw the station, I just shook my head. After I realised what happened there, I was thinking about my daughter because she was staying by someone, but luckily the person told me everything was okay. I thought that if it could be this bad at the station, what happened to my place at home?

I walked from here in town to Sea Cows Bay. It took me a while because I had to be clearing and climbing over trees and things. We had to take everything out of my house, clean up, and then around 2 a.m. I walked straight back to the fire station.

We weren’t concentrated on repairing the station at first: We were more concentrated on the public. We were out helping others. The work we started doing here after the recovery effort was getting under control, and then we started to think about it. We couldn’t sleep here, so most of the officers were going by the hospital to rest and things like that, but I was staying here [in the station].

Right now on Tortola we have one fire truck. We had a truck pump break down, so we had two, but now we have one. And that covers the whole of Tortola. The other broke down after the Coxheath fire.

St. Thomas had come in and loaned us some equipment, but we didn’t use their equipment because we tried to work with what we had. They came over and saw how the fire was, so they decided they were going to try and assist us, but the pump they sent over was the same as the pump we had. So we didn’t use it: We just continued, and we got the fire under control.

We are in talks with a company in the United States, and the Ministry [of Communications and Works] is trying
to work along with us in getting us some sort of fire truck to assist us. We’re limited because the station needs vehicles, but we’re going to try to work with what we have for the time being.

No work at all has started on the building. When the rain used to come, it used to run down on the floor like crazy. So I went upstairs and got a jackhammer and I drilled some holes leading outwards so the water doesn’t come in that much. It runs off instead.

Officers still sleep here. Since we did the drilling and got the water out, it’s not all that bad like before, so no water goes in where they’re sleeping.

It’s been tough, yes, but we know what we signed up for: to save lives. So we will go out, and whatever we can do we’ll do to help the public. We don’t concentrate on not having a roof or anything. Once the public calls, we’re going. Whatever limited equipment we have, we use that and assist them.