As Virgin Islands artist Vincent “Bing” Malone sat on his chair with a rainbow-coated palette in one hand and a paintbrush in the other, drivers stopped by every few minutes …

END_OF_DOCUMENT_TOKEN_TO_BE_REPLACED 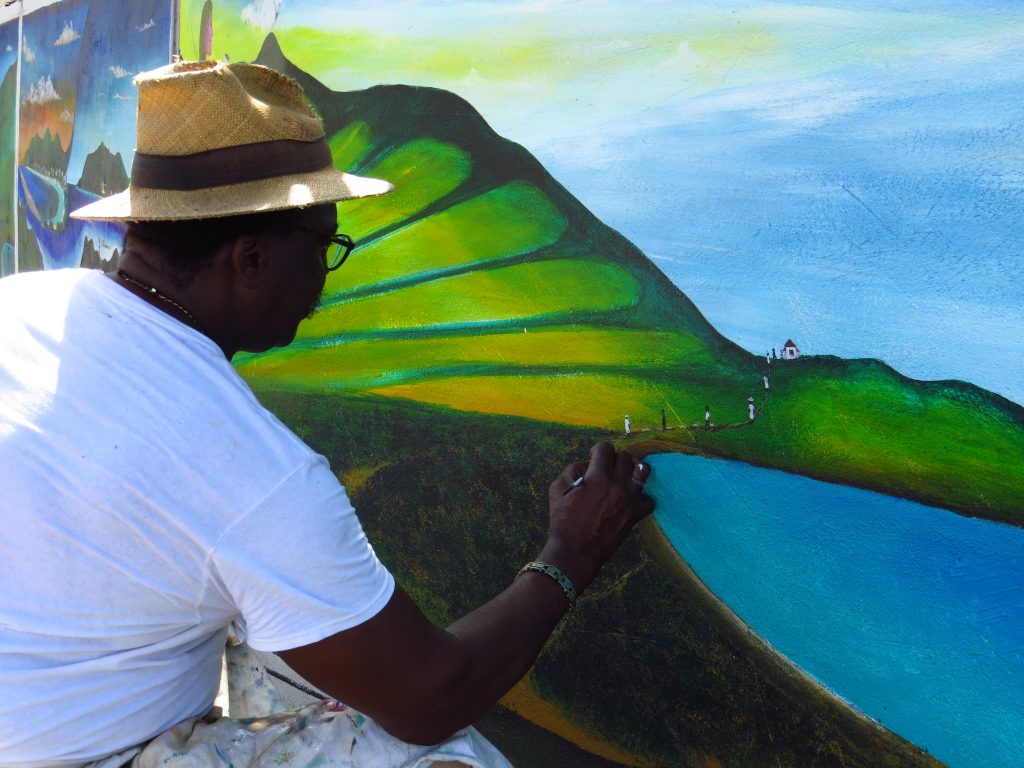 Virgin Islands artist Vincent “Bing” Malone adds the finishing details to a mural panel depicting a group of people who migrated to Long Look and other areas of eastern Tortola in the early 1800s. The mural, which is to include 20 panels, shows scenes from the history of Long Look. (Photo: DANA KAMPA)

As Virgin Islands artist Vincent “Bing” Malone sat on his chair with a rainbow-coated palette in one hand and a paintbrush in the other, drivers stopped by every few minutes out of curiosity or to offer a quick word of encouragement. At the centre of all the excitement was a colourful splash of Seventh District history in the form of a new mural.

Mr. Malone is recounting the history of Long Look Methodist Church and its surroundings in a multi-panel painting on the retaining wall in front of the churchyard.

The mural starts in 1789, when the first Methodist missionary, Thomas Coke, arrived in the Virgin Islands, and it will conclude with the 50th anniversary celebration of the current church building in 2018. The final panel will depict the opening of the Long Look Heritage Village, when the church hall became home to a pop-up museum.

One of the early panels shows the arrival of residents in Long Look in the early 1800s, many of whom were freed slaves coming from Guana Island, according to Mr. Malone. Bathed in the reddish-orange glow of the sun peaking over the ocean’s horizon, a line of people make their way along the white-sand coast to East End. The rolling green hills in the background are free from buildings and other developments, and pink hibiscus flowers border the scene.

“There was nothing in this area,” Mr. Malone said. “It was a blank wall. It wasn’t even white. Now it’s going to have all these murals.”

At the time of the interview last month, Mr. Malone was working on a panel depicting Hurricane San Mateo, which destroyed many of the homes in Long Look in 1819. He said he plans to blend the panel as he goes, depicting the storm’s destruction on one end and the rebuilding process on the other.

The artist said he got involved in the project at the request of Long Look Heritage Society Chairman Ron Potter, with whom he had worked previously.

“I was delighted to know that he liked my work and appreciated it,” Mr. Malone said.

The artist added that it was interesting learning more about the district’s history, particularly how it relates to his own experiences. He recalled staring into the sky when Hurricane Irma hit the territory and seeing a face in the clouds. A billowing grey figure appears in his painting of Hurricane San Mateo, and he said he plans to incorporate one into the future panel about the 2017 hurricanes as well.

The plan is for the mural to recount 20 of the most significant moments in Long Look’s history, including the 1890 uprising against British militia members led by Christopher Fleming and when the church hall was first used as a polling station in 1967 as a representative government was established in the territory.

The heritage society, church leaders and the artist put a lot of thought into what moments from history were important to highlight, Mr. Malone said. Some of those milestones are filled with light-hearted memories, such as the first harvest festival in 1916. But some are more difficult to convey. With the 2017 hurricanes, Mr. Malone said organisers believed it was important to depict and remember how community members came together to help one another.

The project is a collaborative effort between the church and the Long Look Heritage Society, and it was commissioned by Education, Culture, Youth Affairs, Fisheries and Agriculture Minister Dr. Natalio “Sowande” Wheatley (R-D7).

Dr. Wheatley said he supported the artwork as a colourful way to share his district’s history.

“In the Seventh District, we’re very proud of the fact that we’re the home of the formerly enslaved Nottingham people, the free people of Nottingham,” Dr. Wheatley said, describing how the Quakers Samuel and Mary Nottingham freed their slaves in the 1770s and ensured they and their descendants would get the plantation in perpetuity.

“From there, we had our free communities develop, right there in the heart of Long Look,” Dr. Wheatley said. “Of course, we want to be able to tell the story.”

In an 1825 report titled “The Colonial Controversy,” Tortola resident Daniel Frazer noted that many of the “Nottingham free people” attended the Methodist chapel in the early 1800s.

Mr. Malone added that more than two dozen other people also reportedly gained their freedom from slave owners Edward Percival, Miriam Harrigan and Elizabeth Frett and came to Long Look from Guana Island, Great Camanoe and Spanish Town, Virgin Gorda. In 1811, Miriam Vanterpool donated land in East End to the Methodist Society for a chapel, and the community grew around it.

Dr. Wheatley said he was happy to support the project when approached by Mr. Potter. The mural could also provide a boost in promoting cultural tourism in the territory, he added.

One part of the project is bringing buses to visit historic sites and mini markets in East End. “I’m going to be doing other things in the community to support the Long Look Heritage Project,” he said.

Dr. Wheatley said there is already a lot of excitement surrounding the mural in particular.

“People see the mural being painted, and certainly Bing is a very talented artist,” he said. “It’s an attractive mural, and I think persons like what it does to the area, how it beautifies the area. It tells a story that they find interesting.”

The heritage project incorporates physical attractions and events in a community-wide effort to celebrate the area’s history.  Mr. Potter said the mural has sparked some spirited discussion in the community, and he appreciates that community members are taking an interest in how Long Look’s past is portrayed.

In addition to the mural by Mr. Malone, a nearby mural painted in 2016 and 2017 conveys the general history of the Seventh District.

Other elements of the heritage project include a “wall of fame,” which features photos and short biographies of prominent community leaders. Heritage plaques located throughout the community also mark important places and points in time, such as the conveyance of manumission.

On days when cruise ships are scheduled to arrive in Tortola, a mini-market features vendors of pastries, drinks, spices and sauces popular in the VI. Mr. Potter said the society hopes to facilitate a more frequent fishers’ and farmers’ market as well. The next market takes place at 9 a.m. March 28 at The Stickett.

Mr. Potter said it is important to celebrate the past in order to understand the community as it is today. Even the name of The Stickett is a reminder of how residents would stick notes to a prominent tree in the middle of the community as a way of staying connected. Though the tree itself is gone, its former location still serves as a meeting place.

The heritage society has several other projects planned for the near future, including an urban garden, Mr. Potter said.

The Long Look Methodist Church mural is the newest of several on Tortola that share the island’s history.

VI artist Reuben Vanterpool recently retouched the mural at Fahie Hill, which shows general scenes from Tortola’s past like a sugar mill, traditional dancing and donkey riding. Mr. Vanterpool said he appreciates being one of the artists who gets to share the VI’s history and make it accessible for passersby.

“I’m glad that we could tell the story of the Virgin Islands people,” he said.

The large-scale Fahie Hill project was a collaborative effort among about half a dozen VI artists, prompted by Eileene Parsons, one of the first two women elected to the legislature.

Mr. Vanterpool said he is pleased to see an uptick in interest in historical art in the VI. He shared some concern about the possible effect of impeding traffic flow if too many roadside murals pop up, but he is eager to see what other mediums — in particular, sculptures — could come from this revitalisation of VI art.