Luca Reich plays football for the under-17 BVI National Team, but due to the government-imposed lockdown to combat Covid-19 he has been spending a lot of time at home. However, …

END_OF_DOCUMENT_TOKEN_TO_BE_REPLACED 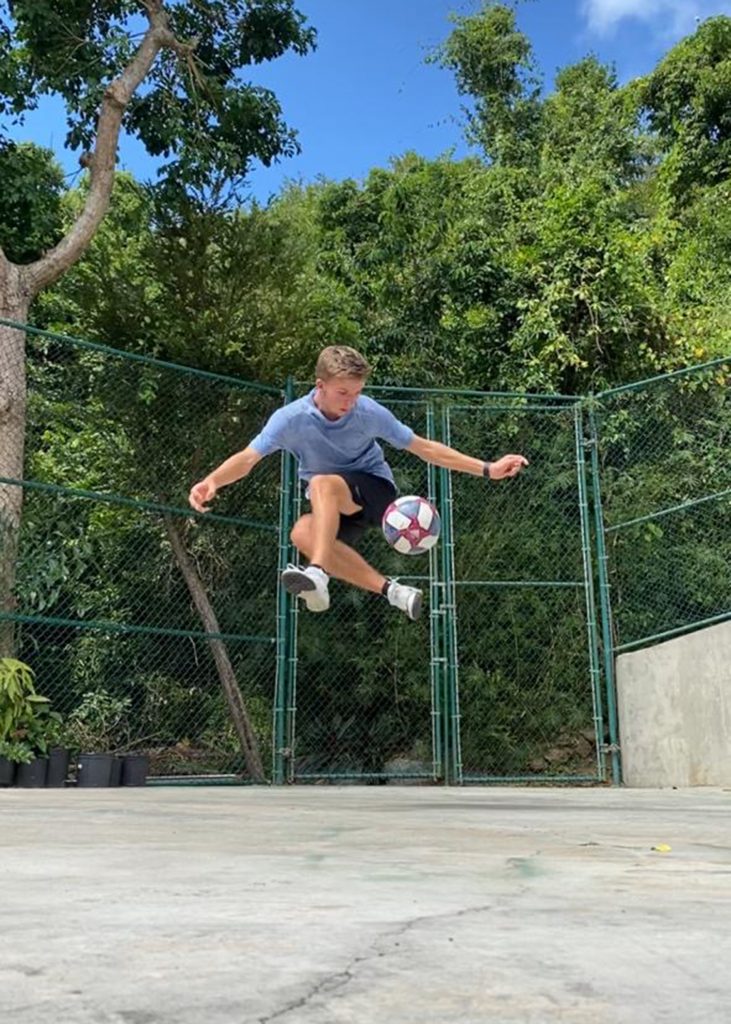 Luca Reich plays football for the under-17 BVI National Team, but due to the government-imposed lockdown to combat Covid-19 he has been spending a lot of time at home.

However, that hasn’t stopped him from practising the sport.

And he is not alone, thanks in part to the BVI Football Association.

Instead of letting players and coaches sit at home and grow stagnant, the BVIFA has partnered its individual player development programme with an app called Champion Player Pathway, which posts daily football challenges online.

“It has helped me a lot,” said Mr. Reich, a 16-year-old student at Cedar International School. “Surprisingly, I’ve learned so much from being on my own. Because normally, you’re out with your team and you’re doing a lot of team stuff. But when you’re all alone, you’re able to focus on yourself a lot more. I’ve been able to realise that I can do a lot more than what I thought I could.”

Participants watch a video through the app, practise three or four challenges and then they decide which one they want to be scored on. The players record themselves completing the challenge and then email the video to a panel of four judges, who are BVIFA coaches.

“That creates a weekly leaderboard,” explained BVIFA Technical Director Dan Neville, who created the app in 2018. “We never really did a huge amount with it, but now with the lockdown the app — that’s designed to coach players anywhere in the world — has really come to the forefront here.”

The challenges focus on skills like passing, shooting, dribbling, receiving the ball off the ground, and general freestyle.

Players have a variety challenges that cater to various skill levels, which has helped make the programme a success, BVIFA officials said.

“It depends on the individual and what they’ve got available to them in terms of what they can do,” said BVIFA President Andy Bickerton. “Some boys, for example, have a deck or a backyard and they can actually run with the ball. And you see other boys that are actually inside an apartment and they have to juggle in the dining room or the living room. [Mr. Neville] is trying to give them a number of skills to practise so that that everybody can at least achieve one of them.”

Mr. Reich considers himself fortunate to have ample space to practise the challenges at his Tortola residence.

“I’m very lucky that I’ve been provided with a great space to go and work out,” said the athlete, who typically spends more than an hour each day on the challenges. “It allows me to work on a lot more stuff that I know some people are not able to do because they don’t have the space.”

Mr. Reich sits atop of the leader board, but he said he gets more satisfaction just from completing the daily challenges.

“Obviously, seeing yourself on top of the leaderboard is motivating, and it’s great to know that your work didn’t go unnoticed. People are seeing that you’re putting in the time and effort to try and improve yourself. But for me, it is just the self-satisfaction of when I get that trick, and I’m able to watch it back. … I am so happy with myself that I got it.”

All told, the programme reaches about 50 players a week, with more than 16 completing the challenges daily. Not all the players record their challenge or have it scored, but the BVIFA is seeing more players becoming interested in football.

“Some siblings that weren’t part of our programme have joined, because they were looking into things to do, and they’re quite enjoying it,” Mr. Neville said. “Now that there is downtime, I think we’ve maybe gained a few players.”

The technical director added that there is enough content on the app to keep the programme going daily for another five weeks. Mr. Neville is currently in the United Kingdom, but plans to record another six weeks’ worth of content in the coming weeks.

“We’ve got some other initiatives in the pipeline that we can use to keep it fresh if we need it,” he said. “It’s open to everyone, but our Virgin Islands players are first and foremost. We’re getting interest from all across the world. Everyone’s welcome to join in.”

Aside from watching the players’ videos and scoring them, the BVIFA coaches and trainers are also staying busy by improving their skills online by completing courses in subjects like talent identification and performance analysis.

“We’ve got some full-time staff and we need to occupy them,” said Mr. Neville, who has been the BVIFA technical director since January and started as the assistant men’s national team coach in 2017.

All of the BVIFA’s full-time staff is on full salary, according to the BVIFA president.

“We went to FIFA for direction on what we should do with our full-time staff and they said we can continue to use the funds that were provided by FIFA to pay our staff full time,” Mr. Bickerton said. “Just like FIFA staff, our staff is expected to work from home the best they can. So what [Mr. Neville] is doing in terms of these online tutorials is making sure that we as an association can say to FIFA, ‘Yes, all of our staff have been working online’ and ‘Look, this is what they’ve been doing.’”

Last Thursday, a FIFA finance committee meeting was held to discuss funding for associations. Mr. Bickerton, who sits on the committee, said that a resolution was passed to insure that financing of all member associations for 2019 and 2020 would be fulfilled, including the $500,000 that the BVIFA receives. Additionally, a solidarity fund is being set up to help member associations around the world during the pandemic.

Before the pandemic, Mr. Bickerton said, the BVIFA was just getting back to normal after the territory was ravaged by hurricanes in 2017.

“As an association, we had a tough two years in 2018 and 2019,” Mr. Bickerton said. “And here we are again, now hit by the coronavirus when we are just getting things moving again.”

In 2019, the BVIFA re-started the men’s national league despite not having a venue on Tortola due to the hurricanes.

“There was the field on Virgin Gorda, which we got ready pretty quickly afterwards,” Mr. Bickerton said.

This year’s men’s national league is currently 75 percent complete. However, the BVIFA will ultimately make a decision to finish the rest of the season or nullify it and start a new season in October.

Last weekend, the BVIFA was planning to launch its women’s league and kick off its youth league, which is a new initiative, according the BVIFA president.

“We’re now requiring all of our clubs to have a youth team and in due time to have a ladies team,” Mr. Bickerton said.

But those initiatives have been put on hold due to the pandemic, while future events, like the after-school programme, are now in limbo.

“We’re kind of up in the air until we know when we really can get back,” Mr. Bickerton said.

Another project that has suffered due to the pandemic is the East End stadium. Currently, the foundation is in place for the stands and the BVIFA is in the process of accepting tenders to install them.

“And then we got hit by the coronavirus,” Mr. Bickerton said.

The BVIFA has two of the three tenders ready to submit to FIFA, but is waiting for a third one, which is coming from an Italian contractor in the Lombardy region, which was hit hard by Covid-19, he explained.

Once a tender is approved by FIFA, Mr. Bickerton estimates that the East End Stadium will be complete within a year to 18 months. The stadium was on track to be completed by the end of 2021, but now the president estimates that it will more likely be completed sometime mid 2022.

“We would have been starting the lights had it not been for the coronavirus,” Mr. Bickerton said. “So once the coronavirus hurdle has passed, I’m anticipating we’ll be able to start working on the lights pretty quickly, which will enable us to play night games.”

The president is eager to get back into the swing of things. When the round-the-clock lockdown comes to an end, he hopes the association can start to work with small groups of players, while practising social distancing and having proper santising supplies available at venues.

Despite some delays and setbacks, Mr. Neville sees a silver lining in the lockdown and hopes that it fosters player development.

“It gives the player an opportunity to practise his skills every day,” Mr. Neville said. “I actually think that the players who buy in to the programme and complete the programme most days will actually come back better technically.”

He has already seen an improvement in the players, and they are completing some of the challenges with ease.

“I think the advice I would give is get out every day, practise, watch games, self-reflect, think about all the good things you’ve done, and plan things going forward,” Mr. Neville said. “And then, before you know it, you will be back playing again and be in a stronger position.”