This article originally appeared in the Beacon’s print edition on Jan. 17. The total cost of the new Peebles Hospital has exceeded $114 million, Health and Social Development Minister Marlon …

END_OF_DOCUMENT_TOKEN_TO_BE_REPLACED 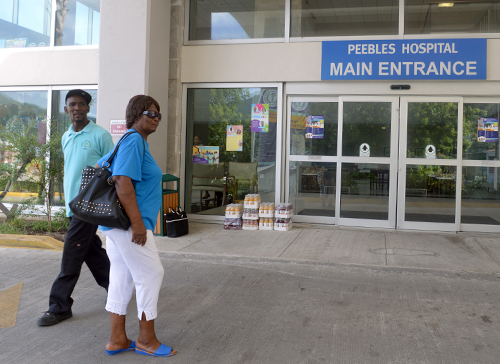 This article originally appeared in the Beacon’s print edition on Jan. 17.

The total cost of the new Peebles Hospital has exceeded $114 million, Health and Social Development Minister Marlon Penn told the House of Assembly Tuesday in response to a question from First District Representative Andrew Fahie.

“I can’t answer that question at this time,” Mr Penn said.

The $114 million figure includes about $106.9 million for construction — which originally was projected to cost $63.9 million — as well as $5.4 million for equipment and computer software, and $1.9 million for furnishings, according to the minister.

Commercial loans totalling $95 million and local funding of $5.9 million were obtained to finance the project from 2013 to 2015, he added.

The minister added that the incomplete 32,000-squarefoot sixth floor of Peebles soon might be leased for “the whole purpose of medical tourism.”

The costs of work on the sixth floor aren’t known, Mr. Penn said, “as these will be determined ultimately by the space holder; … it wouldn’t be a cost borne by the hospital.”

The annex to the former hospital, which was constructed before the new building, added another $12.9 million to the total, including construction, furnishings and equipment, Mr. Penn said.

In February 2007, workers from a consortium of the firms Carimex, Mirsand D’Art, and Quantum Construction Ltd. broke ground on the project under a $63.9 million contract with an estimated completion date of late 2008.
By the end of 2009, the estimated cost had ballooned to more than $100 million, and a long series of delays had commenced.

In 2010, government issued an order for a work stoppage that ultimately lasted 144 days, before terminating the Carimex consortium’s contract due to perceived “deficiencies” in its work.

In 2011, James Todman Construction began completing the external works of the building, with interior works being completed by another firm.

After further delays, the hospital opened in 2014.