In a surprise move last week, Premier Andrew Fahie publicly pushed back against the conditions the United Kingdom would attach to the £300 million loan guarantee that it first offered …

END_OF_DOCUMENT_TOKEN_TO_BE_REPLACED 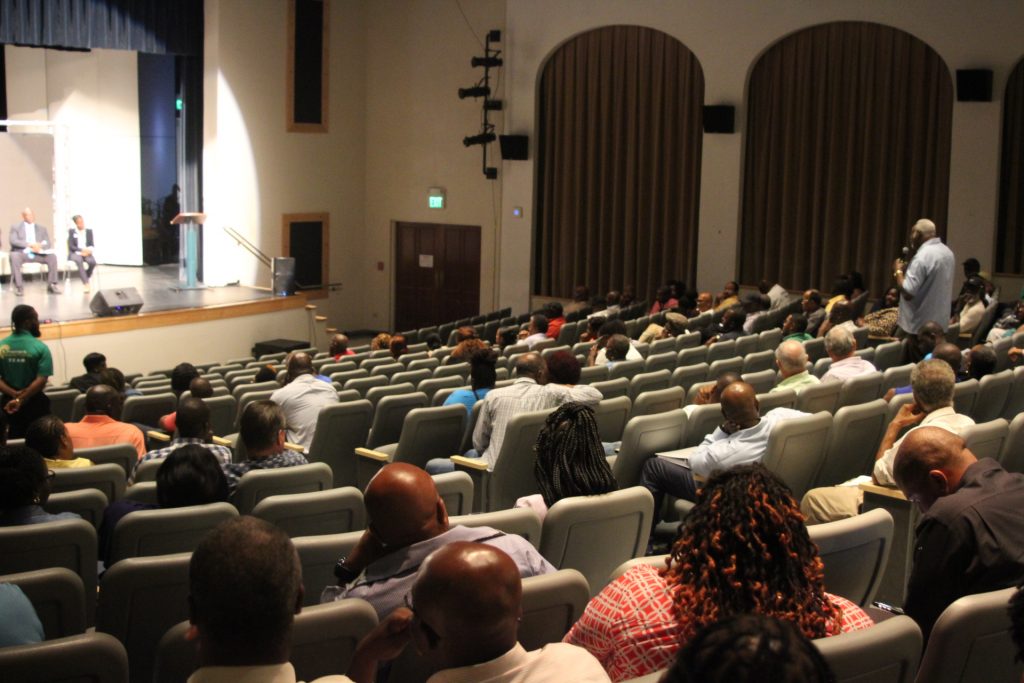 At a public discussion regarding negotiations on the United Kingdom’s offer of a loan guarantee at H. Lavity Stoutt Community College, residents were invited to voice their opinions and ask questions of the premier and other government ministers. (Photo: ZARRIN TASNIM AHMED)

In a surprise move last week, Premier Andrew Fahie publicly pushed back against the conditions the United Kingdom would attach to the £300 million loan guarantee that it first offered in November 2017 to assist with the recovery effort.

The move shone a spotlight on the rocky closed-door negotiations that have delayed the territory’s access to funding even as taxpayers are footing much of the nearly $400,000 per month in reported operating costs for the Recovery and Development Agency, which was set up in large part to administer the loans under the UK guarantee.

Three days after Mr. Fahie first aired the issue in a Friday statement, Governor Gus Jaspert responded, standing by the UK conditions — many of which were agreed by the previous government — as fair measures designed to ensure accountability in keeping with “international best practice.”

But Mr. Fahie said the conditions must be renegotiated and the Virgin Islands RDA Act, which he voted for when it was passed in April 2018, must be amended. He also called for a hiring freeze at the RDA — which he claimed has completed “no major project” — and said changes to the 2012 Protocols for Effective Financial Management are needed in light of the new post-hurricane situation.

Summarising his concerns, Mr. Fahie explained that the UK government is demanding that the VI “basically hand over almost full control of the management of the territory’s finances to the [RDA], which was set up at the request of the UK government.”

The governor’s response flatly denied that allegation, saying that the UK “has no intention that control of the management of public finances be transferred to the RDA.”

“Government fiscal management and proceeds from insurance and other government revenue is for the government of the Virgin Islands to decide how best to spend,” he stated. “The UK has only specified that in- vestments and contributions (borrowing and donations) for recovery are financially managed by the RDA.”

He added that the RDA was established by legislation passed in the House of Assembly and is an agency of the VI government.

“The [loan guarantee] conditions are linked to international financial best practice,” the governor said. “By adhering to them, the government will simply be ensuring financing to the RDA is well managed.”

The premier agreed that UK conditions surrounding responsible spending of funds accessed under the guarantee were reasonable.

But he expressed concern about the wording of section 15(c) of the VIRDA Act, which states that all money received for recovery will be deposited into the VI Recovery Trust, whether it is an RDA project or not, and will be accessed only by the trust manager. Mr. Fahie argued that there must be some checks and balances within the RDA to ensure transparency and accountability.

He also asked that the “distinction about what funds should be automatically placed in the Virgin Islands Recovery Trust fund, and which should not, needs to be clarified.”

Additionally, he took issue with the financial ratios required by the 2012 Protocols for Effective Financial Management — which he said were meant for “normal, non-disaster” circumstances — and what he said were additional conditions placed on the loan guarantee as a result of poor management by the previous administration.

He also listed what he said were several violations of the Protocols under the previous government, including a lack of audited financial statements for a number of years; cost overruns at the new hospital and the cruise pier project; the $7.2 million paid to BVI Airways; the “unconstitutional” transfer of $8 million in loan funds to the BVI Ports Authority that was in- tended for the East End/Long Look sewerage project; and alleged irregularities surrounding the Elmore Stoutt High School wall project.

“May I say that it is unfair and unjust for the UK government to seek to penalise the people of the Virgin Islands and this new government on the basis of the actions of a past government,” the premier said.

In normal circumstances, Mr. Fahie said, these ratios would be “reasonable” and “healthy, but in the aftermath of two Category 5 hurricanes, “These are not ordinary times and ordinary circumstances.”

“It is our view that these ratios should be suspended for the duration of the guarantee or adjusted to more practical levels,” he stated.

The governor addressed this concern as well, explaining, “The very offer of a loan guarantee is an indication by the UK government” to “consider proposals for an extended date to return to compliance.”

According to Mr. Jaspert, the Protocols include provisions to do just that.

“[The governor] assured the UK government would consider proposals to extend the time- frame for us to bring the figures back within the stipulated ratios,” he told the audience of about 200 people. “I want to thank His Excellency for giving that verbal commitment on be- half of the United Kingdom, but we need to have that in writing. If any future government need to deal with such a situation and none of the present players are around, it is in writing. We need to have it in writing before we sign any document.”

Mr. Fahie, along with several of his party’s ministers, expressed their views on stage and answered questions from the audience. The purpose of the public discussion, moderator Claude Skelton-Cline said, was to hear from the public.

The premier also used the time to take aim at the RDA.

Because of this situation, he said, he called for a hiring freeze at the agency.

“I wrote to stop the hiring of the RDA, to the dismay of many people,” he said.

Attempts to reach RDA officials on Wednesday were not immediately successful.

Julio Henry was among the attendees who voiced their opinions during the session, which lasted about three hours.

“My suggestion: renegotiate for better terms. If you can’t get better terms, we need a BVI Exit,” he said, drawing applause. “Yeah, we could get the help, but the help has to be where it’s really a help and not a welfare situation.”

Throughout the meeting, the premier fielded public outcry regarding various issues ranging from the loan guarantee to generating new revenue streams.

“One of the key factors is that we have to understand how we got here,” said John Samuel. “The RDA came out of the protocols and our failures to govern ourselves.”

Like many other attendees, he said the territory needs to become more self- sufficient and less reliant on the UK.