Though extending the runway at Terrance B. Lettsome International Airport has been on government’s agenda since 2011, the proposal is front-and-centre again following the fall completion of the latest environmental …

END_OF_DOCUMENT_TOKEN_TO_BE_REPLACED 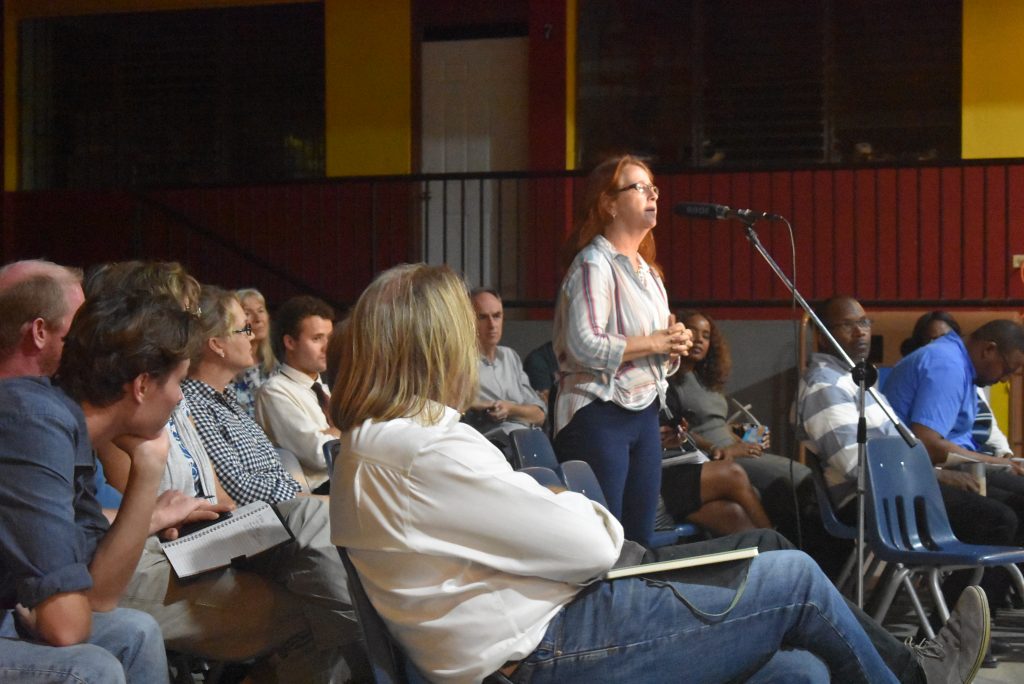 Though extending the runway at Terrance B. Lettsome International Airport has been on government’s agenda since 2011, the proposal is front-and-centre again following the fall completion of the latest environmental impact assessment for the project.

The newest runway design — dubbed “Option E” — hopes to further minimise costs and environmental concerns from previous plans, while making the territory more accessible to travellers, especially from the United States, according to the EIA prepared by biologist Dr. Lianna Jarecki, who provided research consulting.

Last Thursday residents were invited to a public meeting at the Althea Scatliffe Primary School to hear more about the planning application that the BVI Airports Authority submitted to the Planning Authority — and to voice their own comments and concerns about the project.

Before the meeting began, Greg Adams, chief planner at the Town and Country Planning Department, made it clear that the meeting was primarily intended to consider the “technical merits” of the application.

“We are not here to discuss whether this is a feasible project, whether we should start it tomorrow or ten years from now,” he said. “That decision is one that will be made by the persons in positions of leadership.”

According to the 87-page EIA completed in October, the latest runway design has no western extension, which prevents “all foreseen environmental impacts” to the south side of Beef Island, including Well Bay and the Beef Island Channel.

The design also integrates mitigation measures to maintain water circulation through Trellis Bay, including a hydraulic passage and a dredged channel between Sprat Point and the rocks that lie off the northern side of the point.

After technical findings from the EIA were presented on Thursday by Dr. Jarecki, several residents took the opportunity to ask broader questions about the project.

One woman wondered what a major airport renovation would mean for the territory and its tourism product.

“What do we want to be as a destination that would demand big aircrafts coming in?” she asked.

Mr. Adams said government has recently launched a comprehensive tourism study, which will try to address larger fundamental questions of that kind.

Jeffrey Seider, an advisory consultant to the BVIAA who works for the Canada-based consulting firm WSP, explained that the purpose of the meeting was to focus on the results of the EIA, and that broader decisions and conversations would happen at a later stage.

Mr. Seider added that no financial arrangements have been finalised for the project.

While a “number of” airlines have expressed interest in coming to an expanded airport, Mr. Seider said, none have officially committed. The class of aircraft that would fly in is “considerably smaller” than those that fly into St. Thomas or other larger destinations, he added.

“This is not a class of aircraft that would suggest a mass tourism destination,” he said.

Despite assurances, several attendees still found the current plan to be lacking.

“What this is exposing and showing us all is that there are still a lot of holes in this plan,” one man said, adding, “This is not actually helping us plan for our future.”

Questions and feedback from the meeting will be given to the Planning Authority to be added to its deliberations in considering the application.

“Your comments will be a part of that record, and we will be taking serious consideration on those,” Mr. Adams said.