Eradicating belongership in the United Kingdom’s overseas territories likely would be extremely unpopular among those who hold the status, but it could have certain advantages as well, according to an …

END_OF_DOCUMENT_TOKEN_TO_BE_REPLACED 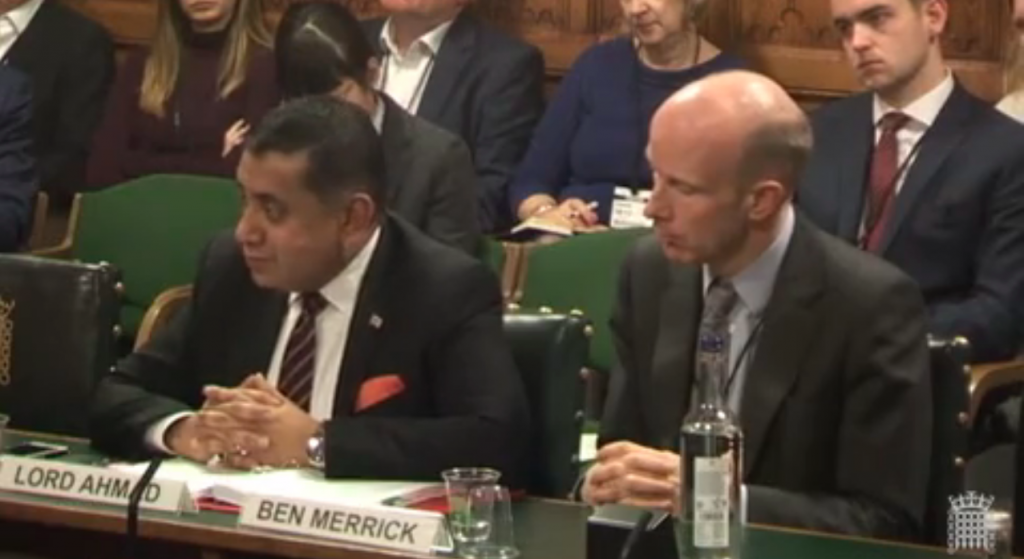 Eradicating belongership in the United Kingdom’s overseas territories likely would be extremely unpopular among those who hold the status, but it could have certain advantages as well, according to an expert on the OTs.

Dr. Peter Clegg, an associate professor in politics and international relations at the University of the West of England, told the Beacon recently that a proposal to phase out the allegedly discriminatory elements of belongership could lead to a wider voting franchise that most OTs would strongly oppose.

However, the potential change could also foster new ideas, enhance the political culture of the territories, and mitigate the risk of political corruption, he added.

In a February report, the UK Parliament’s Foreign Affairs Committee stated that “belongerships are wrong” and urged the UK government to set a timetable to phase them out.

The FAC added that legally resident UK and British OT citizens in the 14 OTs — five of which are in the Caribbean — should be able to vote and hold elected office.

The FAC’s 48-page report followed a seven-month inquiry into the Foreign and Commonwealth Office’s relationship with the OTs.

It provoked a strong reaction from the UK’s overseas territories, each of which has its own belongership equivalent.

In the Cayman Islands, Premier Alden McLaughlin said the suggestion was “akin to an attempt to take over the territory.”

Turks and Caicos Islands Premier Sharlene Cartwright Robinson said she would not accept “the unbridled influx of British citizens to be added to our voting population.”

In the VI, Premier Andrew Fahie has not yet directly ad- dressed the contents of the document, but Deputy Premier Dr. Natalio “Sowande” Wheatley told the Beacon that abolishing belongerships is not in the territory’s best interest.

“I think non-reciprocity is important for us considering our small size and the fact that the UK has probably over 60 million persons and we barely have 30,000 people,” Dr. Wheatley explained. “So you can see that the persons’ will, who have existed here for centuries, may not be able to be exercised if we’re overwhelmed by large numbers of persons.”

Dr. Richard Georges, an English and literature instructor at H. Lavity Stoutt Community College, told the Beacon that belongership is one of the few ways the colonies can exercise any sort of self-determination.

“The ability to control the process by which immigrants become belongers has political utility in a territory where the local is a minority,” Dr. Georges wrote in an email. “Considering that BOT citizens have always been literal second- or third- class British subjects, I struggle to see the validity of the FAC argument that claims to strive for equity and fairness but arrives at conclusions that will ultimately privilege the (especially wealthy) mainland Briton even in the overseas territories.

“Belongership may not be fair per se, but they remain the most effective tool for the overseas territories to have some say in determining their futures.”

Dr. Clegg told the Beacon that such concerns are longstanding.

“Those who wish to maintain the status quo argue passionately that the coherence and integrity of the territories can only be protected and safeguarded under the present arrangements; that a wider franchise, involving people with less strong links to the territories, might take the territories in directions the existing belongers might not wish to see,” he explained.

But on the flip side, there are also strong arguments for phasing out belongerships, which the FAC seems to believe, according to Dr. Clegg.

One is that the present system excludes longstanding residents from the UK and other overseas territories who may have contributed “a great deal” to the economic and social development of the territories but have no voice in the political arena, the professor explained.

“By broadening the franchise, new ideas, new approaches and new thinking can enhance the political culture of the territories,” he added. “Further, a change might mitigate the risks of political corruption by ensuring a greater share of the adult population are part of the political process.”

There is a risk that the authorities would set criteria and potentially change immigration policy to manage who should vote or hold elected office, Dr. Clegg said.

“But overall, if it was a properly controlled process, reducing the imbalance between population size and the electorate and giving those non-belongers who have contributed a lot to the territories access to the political process would be a good thing.”

Dr. Clegg stressed that the FAC’s recommendation would not relate to anyone other than legally resident UK and OT residents.

“Any change would be quite narrow,” he said. “Again, I think this would be a positive development to widen the franchise and provide new rights to well-established residents. Although a case could be made that long-standing citizens from elsewhere should also be given the opportunity to acquire belongership more easily.”

Dr. Clegg has worked with the British and Jamaican governments, the United Nations, the UK Overseas Territories Association, and the Organisation for Economic Cooperation and Development.

The FAC inquiry, which began last July, sought written and oral opinions from the UKOTs’ 250,000 residents.

Contributors were asked to comment on the FCO’s relationship with its territories, including expenditure, administration and policy.

The resulting report, “Global Britain and the British overseas territories: Resetting the relationship,” was published on Feb. 21.

In the 48-page document, the FAC said that while the FCO should urgently address concerns held by the OTs, the OTs must in turn reduce areas of “divergence and friction.”

One point of divergence between the UK and many OTs is belongerships, the FAC stated.

This status, or some variant of it, is enshrined in the constitutions of Anguilla, Bermuda, the VI, the Cayman Islands, the Falkland Islands, Gibraltar, Montserrat and the TCI.

In those territories, people without belonger status, or the equivalent, typically cannot vote or hold elected office.

Former premier Dr. Orlando Smith submitted the 2007 Constitution of the Virgin Islands as evidence to the FAC during its inquiry.

The preamble explains: “The people of the territory of the Virgin Islands have over centuries evolved with a distinct cultural identity which is the essence of a Virgin Islander.”

It goes on to say that a “person belongs to the” VI if they meet certain criteria such as birth in the islands and adoption by or marriage to a belonger.

In its report, the FAC said it asked some OT leaders and representatives about belongership when they appeared before the committee.

In her response, Teslyn Barkman, member of the Falkland Islands Legislative Assembly, said, “There is a certain importance in enshrining what it is to be a Falkland Islander, so we have to put these gates up somewhere in terms of voting or being able to buy land or sell it on.”

The FAC continued, “Bermuda said it was a devolved matter; the BVI government said that its constitution ‘recognises the distinctive character and culture of the BVI and seeks to ensure its protection.’ Cayman did not respond.”

In concluding, the FAC report stated that belongership and its equivalents are “wrong.”

“While we recognise that the OTs are small communities with unique cultural identities, we do not accept that there is any justification to deny legally resident British overseas territory and UK citizens the right to vote and to hold elected office,” the document explained. “This elevates one group of British people over another and risks undermining the ties that bind the UK and the OTs together in one global British family.”

The committee added that the FCO should initiate a consultation with the elected governments of the OTs and work with them to agree a plan to ensure that there is a pathway for all resident UK and British overseas territory citizens to be able to vote and hold elected office in each territory.

It added that in its response to the report, the FCO should lay out a timetable for this consultation process and set a deadline for phasing out discriminatory elements of belongerships.

In this case the FAC did not recommend forcing legal change via an Order in Council as it did after proposing the introduction of same-sex marriage and the implementation of public registers of company ownership across the territories.

In written submissions to the FAC during the inquiry, the FCO pointed to its White Paper on the OTs published in June 2012, which expressed hope that the territories would extend the franchise to non-belongers.

“In some OTs, the size of the electorate is small compared with the overall population, with belongership a constitutional prerequisite to qualify as an elector and to stand for election,” the FCO submission stated.

The FCO added that the UK government believes that people who have made their permanent home in the OTs should be able to vote.

The agency added that it recognises the desire of island communities to maintain their cohesion and hence the need for a reasonable qualifying process.

“We hope for progress on this point in the future,” the submission stated.

In his submission, Conservative MP Lord Tariq Ahmad, the minister of state for the Commonwealth and United Nations at the FCO, told the FAC that “the principle of the White Paper remains the case” but added that the OTs “feel very strongly about the issue” and he believes that it is “an issue that they should be ruling on.”

He said he did not intend to intervene.

Estelle Currie, senior media officer at the Select Committees, House of Commons, told the Beacon, “The report speaks for itself on the principle of franchise equality, based on the evidence which we received.

“The Foreign Office is bound to respond to the committee’s report and we await its response to our recommendations.”

The FCO had until two months after the submission of the FAC report to give a detailed response. The report was released Feb. 21, but Sunday was April 21 and as of yesterday no response had been issued.

“The report speaks to the issue of every member of this society being valued and being able to live among each other in a fully unified and democratic society.”

He added that he is encouraging people to read the document for themselves as it contains important issues that will be discussed locally.

“However, let me be clear that these are recommendations from a House of Commons parliamentary committee,” he added, “They do not necessarily reflect the UK government’s policy.”

Further details on the inquiry and the full report can be found at www.parliament.uk.