On Sunday, the 47th BVI Spring Regatta came to a close with its award ceremony at Nanny Cay. All told, 70 boats registered to race in the three-day regatta under …

END_OF_DOCUMENT_TOKEN_TO_BE_REPLACED 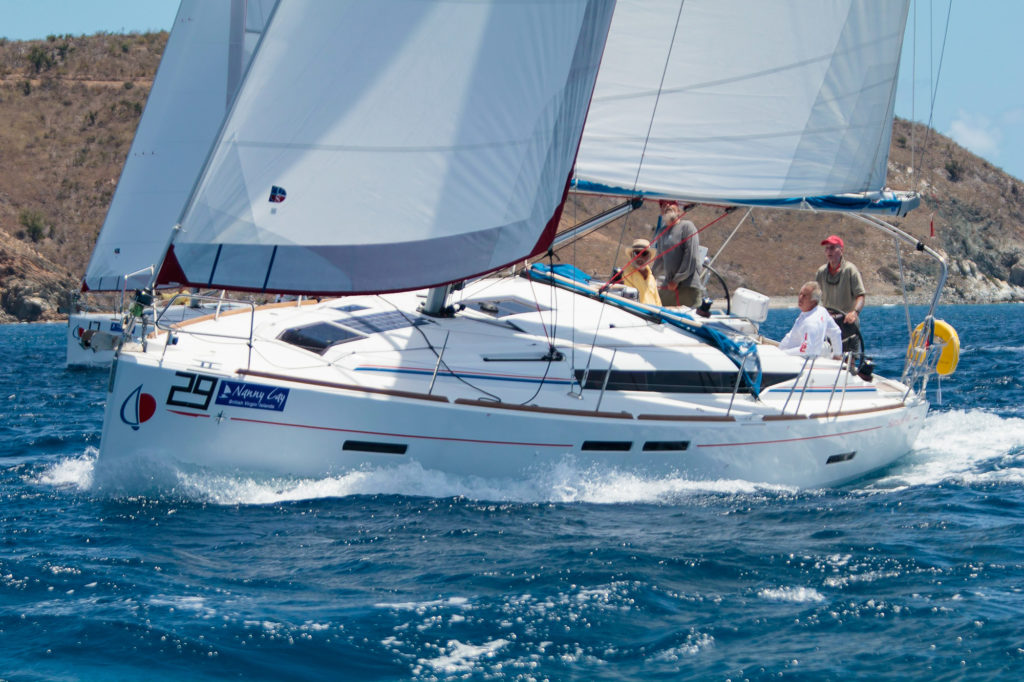 On Sunday, the 47th BVI Spring Regatta came to a close with its award ceremony at Nanny Cay.

All told, 70 boats registered to race in the three-day regatta under mild conditions, but sunny skies.

On the final day of racing, Mr. Tattersall took two bullets in the Bareboat 3 Class with his crew aboard Gatos del Sol/Makin’ Memories, a Sunsail 41. He finished the regatta by winning all six races sailed.

“We had perfect starts for the first three starts,” Mr. Tattersall said. “Team Miami was quite competitive. We were mixing it up, but they are much younger than our crew, which averages out over 70 years old. Our last three starts weren’t great, and we weren’t winning until the last legs, which we did by cutting some corners. We were perhaps more comfortable going near the rocks, which the other guys didn’t do.”

Racing started in eight knots of wind from the east, shifting to southeast and dropping to four knots by the  end of the day. The competition was very close in the Racing 1 Class, where all the boats were around 40 feet. Despite the size differences in boats, most competitors raced next to each other. The Belgian team on the Swan 45 Samantaga finished first in class after taking two bullets. Blitz, owned and skippered by Peter Corr, finished second.

“We had a good start in the first race although it was hard as you must concentrate more in light air,” said Koen de Smedt, Samantaga’s tactician. “We focused on being refined in our movements and sail trim. We started better than our opponents and were able to dominate and push them to the side —  where they didn’t want to go. Yesterday was our best day, we enjoyed the four races and the race committee did a great job. It’s been magic and we’re very happy.”

On the final day, Peter Stanton, skipper of the Melges 24 Boogaloo, took two bullets in the Racing 2 Class to beat his rival.

“Today was a lot of concentration,” said Mr.  Stanton. “The light conditions were better for us, and even though we were over early in the first race, we went back around; got a clean start and lane; and focused on boat speed and smooth maneuvers. It feels great to win and knock a monkey off our back by beating Touch2Play. We’ve been neck and neck for the past two weekends.”

In the Multihull One-design Class, Steve Cucchiaro, owner and skipper of Flow, took four bullets out of five races to win the class.

“Two of our competitors sailed a great weather leg today and got well out in front,” Mr. Cucchiaro said. “We rounded Salt Island, the weather mark, and just made huge gains downwind which helped us win. The highlight of the week, though, is just being back at Nanny Cay, who promised they’d have a miraculous recovery from Irma, and they delivered. We had a fantastic time, kudos to [the] race committee and organisers for a fun event. We look forward to next year.”

In the Bareboat 1 Class, the Lazy Sheets team from St. Petersburg, Florida, took first overall, racing aboard a Moorings 51.

“It’s the first time we’ve done this regatta,” skipper Antony Dalton said. “Last fall we held a fundraiser at the St. Petersburg Yacht Club to raise money for the people here, and additionally a group of us got together to race this event because we wanted to help. We’ve had a great time and we’ll be back next year to defend.”

Much uncertainty hovered over this year’s BVISR after hurricanes Irma and Maria ripped through the Virgin Islands.

“Two months ago we weren’t sure how this event was going to work out this year, but here we are. It’s so good to see so many people and friends returning to the BVI,” said Chris Haycraft, co-skipper of Godspeed, who took bullets in every race sailed to win the Performance Cruising Class.

He added that just being out sailing with friends was a highlight.

“It’s so good to be out on the water again,” Mr. Haycraft said, who lost his former boat, Pipe Dream, to Irma. “It’s been interesting and different learning this boat, which is very new to us. Our starts weren’t great, but we made ground downwind with the whomper — that was the ticket — we overtook and pulled away. It was great racing against good friends.”

Eddie Brockbank on Lucky 7, a Corsair Spring 750, sealed the deal in the Multihull Class taking two wins on the final day for five bullets over six races.

Mr. Brockbank credited his son Chris, 24, for his success. Chris recently did an Olympic campaign in the 49er with Alec Anderson, also from Tortola.

“Chris was very switched on, calling all the shifts, and with three almost identical boats the competition was great,” said Barney Crook, who took third in the class aboard Airgasm, his new Corsair Sprint 760R.

Mr. Crook also had his son Adam on board, who represented the BVI in the half-pipe ski at the 2014 Olympic Winter Games.

The award ceremony took place at the Regatta Village where winners from all classes and special prizes were presented by VIP guests, including the  Premier Dr. Orlando Smith.

The Guy Eldridge True Spirit & Enthusiasm award was presented to Nanny Cay and the Regatta Village team. It was accepted by Miles Sutherland-Pilch and Brendan Joyce (Nanny Cay), and Lou Schwartz (Village Manager).

“We’re delighted that this year’s event has been so well attended and that sailing conditions were so good,” said Cameron McColl, Nanny Cay chairman. “We look forward to having everyone back again next year when we expect to have 200 additional slips.”