Vanterpool sworn in, then attacks

Speaker of the House Julian Willock swore in Mark Vanterpool as Fourth District representative in the House of Assembly on Tuesday, the culmination of a four-month long dispute over the …

END_OF_DOCUMENT_TOKEN_TO_BE_REPLACED 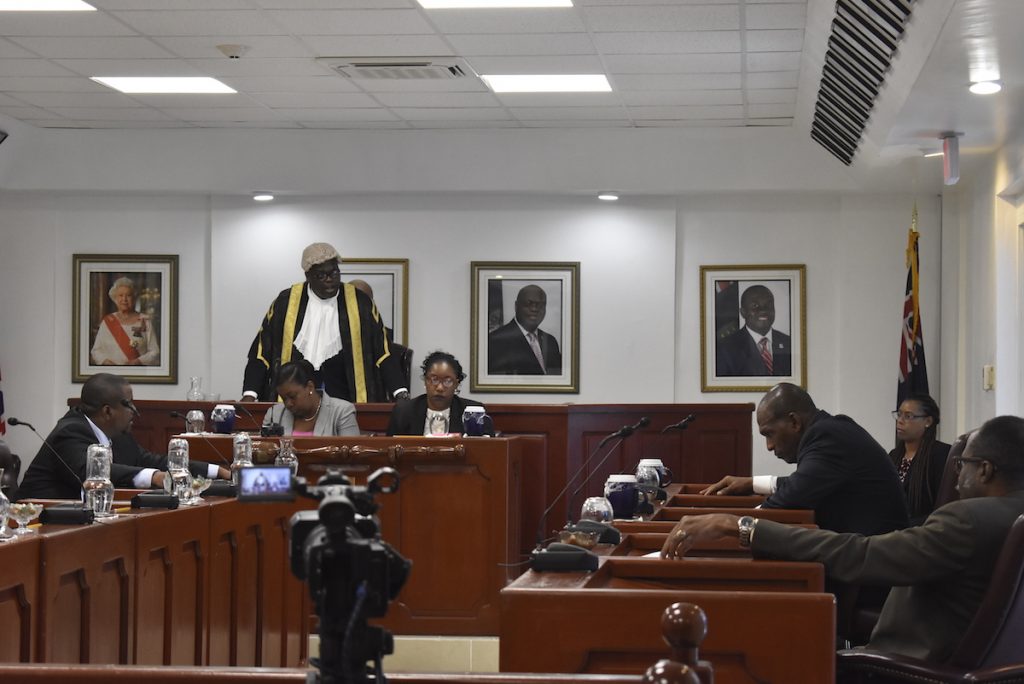 Speaker of the House Julian Willock and opposition member Mark Vanterpool sparred in the House of Assembly on Tuesday after Mr. Vanterpool was sworn in as Fourth District representative following a lengthy legal battle over the validity of his resignation and his subsequent reversal. (Photo: GENEVIEVE GLATSKY)

Speaker of the House Julian Willock swore in Mark Vanterpool as Fourth District representative in the House of Assembly on Tuesday, the culmination of a four-month long dispute over the validity of Mr. Vanterpool’s March 5 resignation and subsequent reversal.

Mr. Willock maintained that the complexity of the case warranted further judicial consideration but explained that he dropped his court appeal in the matter because the people of the Fourth District “should not be made to suffer for the action and conduct of others over which they had no control.” He added, “They are innocent victims and have been pinned into an undeserving corner from which they must helplessly watch as the drama in the legal and political theatre unfolds without any meaningful relief.”

After Mr. Willock swore him in, Mr. Vanterpool attempted to speak, but Mr. Willock interjected, telling him that his remarks were not on the Order of the Day and that he would have to wait until other business had concluded.

Mr. Willock then declared the House in recess after Mr. Vanterpool’s repeated attempts to speak, and Mr. Vanterpool proceeded to use a microphone to deliver his remarks outside the HOA to a crowd of supporters while the House resumed its session inside.

In an impassioned speech, the Fourth District representative railed against Mr. Willock and dredged up unproven allegations against Premier Andrew Fahie stretching back to the early 2000s.

At the start of his address, Mr. Vanterpool questioned the need for Mr. Fahie’s round-the-clock security detail, which the District Four representative alleged would cost taxpayers more than $5 million over the next four years.

He then asked whether the need for heightened security might be connected to a previous investigation of Mr. Fahie on suspicions of money laundering.

Mr. Fahie was investigated in the early 2000s on suspicion of laundering tens of thousands of dollars that allegedly had been gained through theft and fraud involving a government contract to develop the Terrance B. Lettsome international Airport, according to the website Offshore Alert.

Mr. Fahie was not charged with a crime, and he has repeatedly denied wrongdoing in the matter, but on Friday Mr. Vanterpool repeated 16- year-old allegations that Mr. Fahie was suspected of couriering hundreds of thousands of dollars from the VI to the US through people who flew to Miami carrying large sums of cash that were suspected to be proceeds of a crime.

On Friday Mr. Vanterpool said that around 2003 Mr. Fahie called him and Carvin Malone, who is now the minister of health and social development, from the US asking for money for “emergency family health care,” which Mr. Vanterpool later learned “might have been for something else.”

Mr. Vanterpool said he “was not one of those persons who had to strap money to my body to take this money to the US” but added that he believes Mr. Malone helped raise funds for Mr. Fahie.

Such funds, Mr. Vanterpool said, ultimately may have paid for “services perhaps to one powerful lady; they say her name is called Mamacita.”

He added that it is “public knowledge” that police raided Mr. Fahie’s home, and called for the allegations and circumstances surrounding the investigation to be fully reported in the House.

Mr. Vanterpool also said that local courts at the time subpoenaed records from his own personal bank account and company bank accounts in connection to the investigation.

He did not specify the dates when the investigation occurred, but he implied that the governor at the time was Frank Savage, who served from 1998 to 2002.

Mr. Vanterpool also criticised the awarding of contracts for the Elmore Stoutt High School, and the Cabinet’s recent appointment of Bevis Sylvester as chairman of the BVI Airports Authority.

During the airport probe in the early 2000s, investigators also alleged that Mr. Sylvester improperly used his government position as budget coordinator to award a contract for telecommunications equipment for the airport to a company with no experience in telecommunications that was formed solely for the contract.

In 2004 a judge sentenced Mr. Sylvester to six months in prison after he pleaded guilty to obtaining a pecuniary advantage by deception and neglect of duty, according to media reports at the time.

On Friday, Mr. Vanterpool asked, “Why is he being rewarded now to be the chairman of the BVI Airport Authority when he was sent to prison for a contract that was illegally done on behalf of the same Airport Authority?”

The District Four representative went on to lambast the appointment of Mr. Willock as speaker of the House, citing his previous dismissal from the public service, his brief imprisonment, and his involvement in Virgin Island News Online, which Mr. Vanterpool said has attempted to intimidate the press.

“One reporter in the media, I was sorry for her, in the Beacon,” he said, referring to this reporter. “She opened her mouth and the Virgin Islands News Online shut her down by saying she’s racist. Let the media do their work.”

On Friday Mr. Vanterpool claimed that he helped him get out of prison at the time.

He also brought up concerns related to the February general election, including polling discrepancies, reports of improper removal of counting machines, and the hiring of Hamlet Mark, who he said was a policy adviser from Grenada hired by the Virgin Islands Party.

While Mr. Vanterpool’s fiery remarks continued, inside the HOA Mr. Fahie delivered his own statements, in which he defended the merits of the legal case challenging Mr. Vanterpool’s right to be sworn in.

He also praised Mr. Willock for “being open to persuasion and for being so considerate and sensitive to the overtures made by myself and my friend, the honourable leader of the opposition, and making today possible. You have served this honorable House well and enhanced the integrity of your office.”

However, Mr. Vanterpool’s spirit did not diminish once he rejoined the HOA proceedings.

After Mr. Fahie’s first statement, the former communications and works minister interjected to suggest the premier launch an audit or investigation of the millions of dollars that he has suggested went missing from the BVI Ports Authority.

A verbal tussle between Messrs. Fahie, Willock and Vanterpool ensued, with Mr. Willock at one point rising out of his seat to bang his gavel and loudly demand that Mr. Vanterpool respect the Standing Orders that govern HOA proceedings.

Messrs. Fahie and Willock did not respond to requests for comment as of press time yesterday. The Beacon was unable to reach Messrs. Malone, Sylvester and Mark.