The Virgin Gorda school that late legislator Robinson O’Neal died serving will re-open in September, thanks to a donation from the North Sound Foundation, the organisation formed by Oil Nut …

END_OF_DOCUMENT_TOKEN_TO_BE_REPLACED 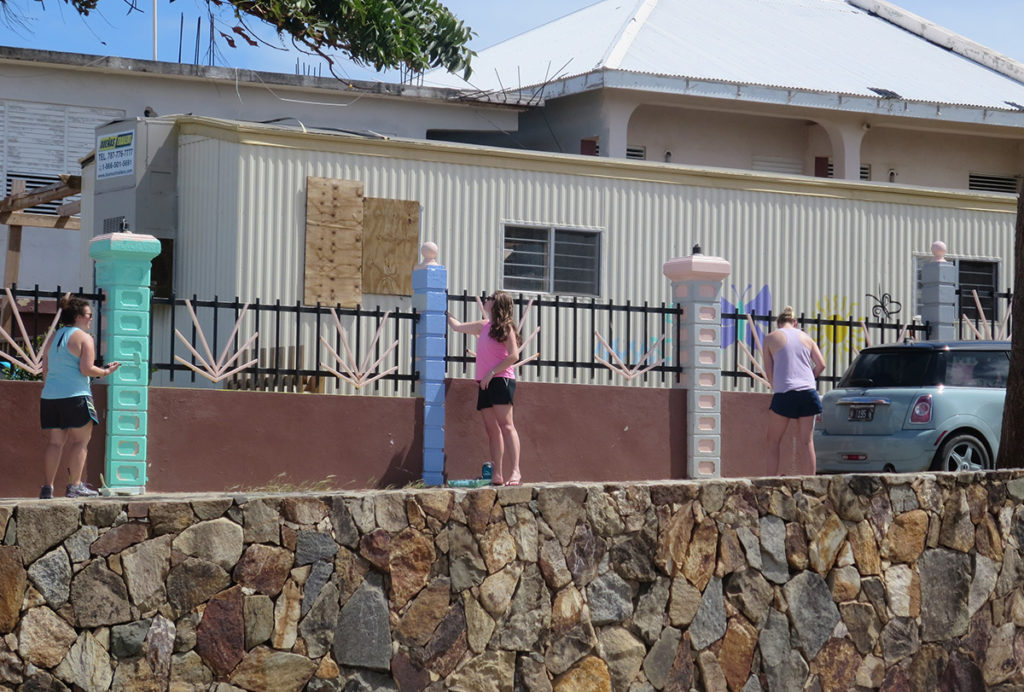 The Virgin Gorda school that late legislator Robinson O’Neal died serving will re-open in September, thanks to a donation from the North Sound Foundation, the organisation formed by Oil Nut Bay developer David Johnson.

During the groundbreaking ceremony Friday, the Robinson O’Neal Memorial Primary School was an empty shell, with its roof, windows and doors knocked out by Hurricane Irma to create a clean slate. However, when it opens in September, it will include air-conditioning, solar energy, a backup battery system, a concrete roof and a covered courtyard that teachers and students had been hoping to get for years, officials said Friday.

Mr. Johnson said during the ceremony that the uncovered courtyard had been a problem for a long time.

“Now you can have your graduation ceremonies here,” he said. “It has indeed been a trying time for the teachers here. … It is not the environment they are accustomed to.”

Dr. Marcia Potter, permanent secretary in the Ministry of Education and Culture, said the new facility will be certified as a SMART School, a designation that requires an assessment of their location, design, construction, environment and evacuation procedures.

Education and Culture Minister Myron Walwyn said the design aims “to take advantage of green technology, to ensure there is internet access, … [and] to bear in mind differently-abled persons.”

Since the storms, ROMPS students have been attending the Assembly of God Cornerstone Primary School in Spanish Town, and Mr. Walwyn thanked Pastor Peter D’Abreau of the church for accommodating them.

“[He] came forward and said, ‘We know there is a problem with schools in Virgin Gorda,’” Mr. Walwyn said. “‘You can utilise my facility.’ And that is how we are able to teach our children here.”

According to the minister, Mr. Johnson had already been a supporter of education on VG, donating computers, books and other supplies.

The price of the project was not disclosed, but Mr. Johnson said with a laugh that it was 30 percent over budget by the time designers added everything on the teachers’ wishlist.

“But we figured if we were going to here we’d better go all the way,” he said, adding that with concrete walls and roof, the school will also be fit to serve as a hurricane shelter in the future.

Ninth District Representative Hubert O’Neal, the eldest son of Robinson O’Neal, observed that the covered courtyard will benefit more than just the students.

“It is going to be a benefit for the whole community of North Sound because we have concerts and social activities,” he said. “We don’t have too many facilities that can accommodate a large crowd.”

Robinson O’Neal died in a car crash in 1971 while delivering furniture to the school. He was in office only for about two years, but another of his sons, Allen O’Neal, said he accomplished a lot in a short time, pushing for roads and other infrastructure in the North Sound.

“He would threaten; cajole; do everything within his power to deliver for the people within his district,” said Allen O’Neal, adding that the name of the school speaks to his father’s legacy. “They could call it North Sound School; they could call it anything. But for that [name] to remain is a testament of the man and we as a family.”

Meanwhile on Friday, Bregado Flax Educational Centre in The Valley was enjoying the help of US volunteers Amanda Hone and Lauren Weinstock, repeat visitors to VG for many years, who said they were looking for opportunities to help out on this year’s trip.

“We came down recently to visit, so … we drove by and we just stumbled upon it,” Ms. Hone said. “We stopped and said, ‘And can we help you out a little?’”

The answer was yes, and they connected with Unite BVI and Nadia Winter, art department coordinator at BFEC.

“The plan is to do the preliminary work, and the kids are going to draw flowers,” Ms. Hone said. “It’s a re-beautification project.”

Tuesday morning, they also headed to the Ciboney Centre for Excellence to help organise some of the books and supplies in preparation for the school’s move to a new building.

Unite BVI has embarked on several projects at BFEC since the hurricane, including, in November, bringing in a team of employee volunteers from Virgin Atlantic airline, who, instead of their annual sailing challenge in the territory, ripped up rotting floor tiles and put a temporary roof on one of the buildings in preparation for a more permanent fix, according to the company’s website.

Secondary and primary students at the school were sharing one building until November, when MSC Cruises, Inc. donated a 4,000-square-foot semi-permanent structure for the younger students.

Although Secondary Division Principal Hilroy George declined to discuss details of the progress the school has made since then, he did say that the student body is still not at its full capacity even though some students who left after Irma have returned.

He also led a short tour of the school, pointing out that he’s still working out of a makeshift office, and that one of the two main buildings in the secondary division still remains unusable.

“The costing of the roof for the Bregado Flax secondary has now been completed and we will be working with FLOW and Unite BVI to have construction completed as soon as possible,” Mr. Walwyn said at the time.

Shortly after Irma, Mr. Walwyn addressed conditions on VG, which for days had been cut off from all communication with the government in Tortola.

“We didn’t want to have the sister islands left out,” he said. “We deployed an education officer specifically for Virgin Gorda: ‘Don’t come by Tortola; don’t come by us; stay in Virgin Gorda and make sure that things on the ground and all the schools are in order.’”

Heida Joyles Selwood, a former teacher at BFEC, was that officer.

“When you came over from Tortola and saw the devastation, you wondered how this could be,” she said. “But [the VG schools] have done an exceptional job under the circumstances. With the storm, we lost my computer, and we didn’t even have Internet at the beginning of the school year.”

She said that having the new ROMPS in place for next year will solve many of the immediate problems surrounding education on the island.

The principal, Ms. Creque, said the school will offer the kind of “comfort and the facilities that would really propel education in the territory.”

However, Ms. Selwood also said that the most important work — fundraising — will continue, and that it is imperative to look for donors to come forward to continue helping rebuild educational facilities better than they were before.

“Nobody wanted Irma, but … there is a blessing in Irma,” she said. “We try to stay positive.”

Elsewhere on VG, the students of the Ciboney Centre for Excellence will also be taking a big step. In the spring, they’ll move into a new $1.5 million building being constructed in Handsome Bay funded entirely from private donations, after attending classes since January both in the Catholic Community Centre in The Valley and in another building in Olde Yard Village. Their original building, known as the Chateau, was gutted by the storm.

“We had the [Handsome Bay] land for several years now, but we were fortunate enough to get some assistance to put buildings over there,” said Principal Laura Fox, who helped coordinate the recovery of the schools on VG in the days after the storm when the island was cut off from officials on Tortola.

She said it’s been tough because the school is currently split in two, with the pre-primary division located in Olde Yard Village. The community centre also lacks any kind of outdoor recreation area, which means that on Friday she was herding students onto a safari bus to transport them to a nearby park for recess.

“We’re looking forward to getting a home that is ours,” Ms. Fox said. “Honestly, the biggest thing that is holding us back is [not being together] on the same property.”

Ciboney’s school year kicked off in January, when students moved into the community centre. However, since November, the school had been sponsoring an education programme in Olde Yard Village called Helping Hands, geared toward Ciboney students and others looking to keep occupied. It included activities somewhat modelled after the Return to Happiness counselling programme conducted by UNICEF in the public schools.

Thanks to the Helping Hands initiative, “They definitely very openly talk about what happened with Irma and about the devastation on the island,” Ms. Fox said. “Just in general, kids are resilient.”

Although some of her students left for the United States, United Kingdom and elsewhere, Ms. Fox estimated that around 80 percent of the school’s original student body is currently on the island, with more students planning to return once their families’ homes are rebuilt.

As at Robinson O’Neal, Ciboney students and staff had to quickly adjust to the open-concept space of the community centre, with no real delineation between classrooms and other areas.

“We had to be creative and innovative,” said teacher Eulet King-Evelyn. “We are using the stage as the computer room and the library.”

Overall, she added, the children are coping.

“It’s working fine because we all understand that it’s temporary,” the teacher said. “We don’t have as much technology that we have before, so we have to be more creative in our teaching.”

Ms. King-Evelyn said the school has been forced to step up to provide students with more access to technology.

“A lot of them still don’t have internet at home,” she added.

Like other teachers, Ms. Fox said she agreed that there is opportunity despite the destruction, especially in getting the students involved in their community.

“Post-Irma has been an education in and of itself,” she said, and described how Ciboney students have done everything from delivering fruit baskets to the elderly on Valentine’s Day to planting coconut palms along the beaches to repainting many of the signs that direct visitors around the island.

“[Students] are contributing to the regrowth and redevelopment of their island,” she said. “At the end of the day, it’s going to be theirs.”