During the Festival Food Fair on July 29, Olive Vanterpool was demonstrating the process of making cassava bread as live steel pan music played in the background. Her mission was …

END_OF_DOCUMENT_TOKEN_TO_BE_REPLACED 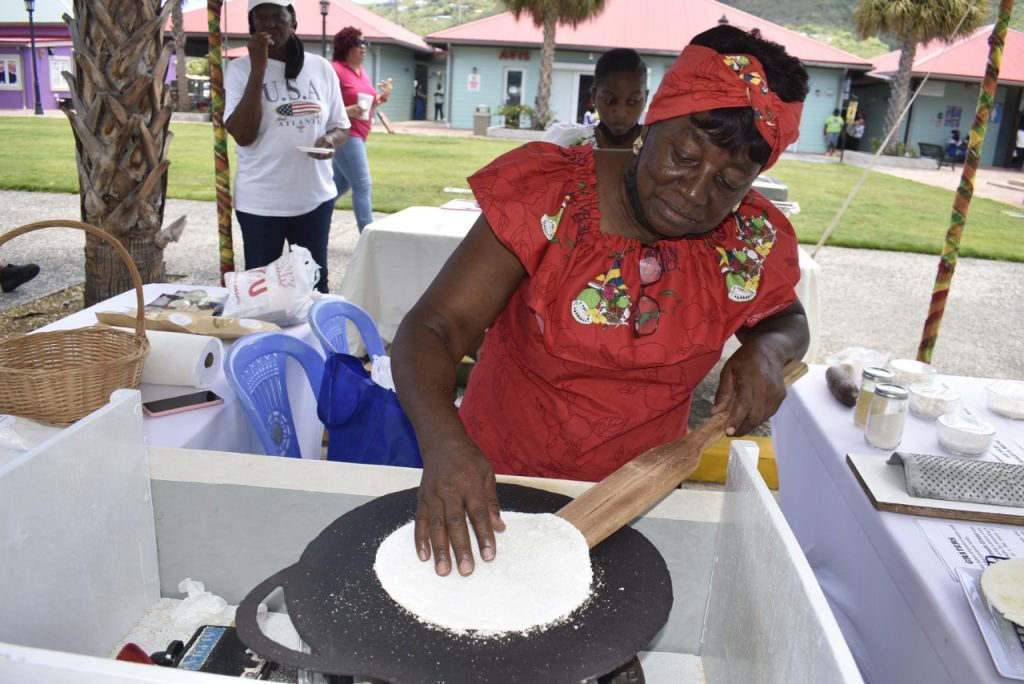 During the Festival Food Fair on July 29, Olive Vanterpool was demonstrating the process of making cassava bread as live steel pan music played in the background.

Her mission was cultural preservation through local recipes.

“After my generation, I’m not sure what’s going to happen,” Ms. Vanterpool said, encouraging young people to learn the time-consuming process of making the traditional bread. “I know it’s tedious, but it’s important.”

Ms. Vanterpool was among about 20 vendors in the Cyril B. Romney Tortola Pier Park that day selling a variety of local dishes such as fried fish, johnny cake, patties, conch soup, peas soup, corned pork, cassava bread, traditional candies, tarts, and much more.

The event kicked off with an opening ceremony, where Gen Y Factor 2022 winner Yohance Smith sang the territorial song and national anthem and the Nouveau Royale group performed a cultural dance.

In opening remarks, Education, Culture, Youth Affairs and Sports Minister Sharie De Castro described the food fair — which was organised by the Virgin Islands Festivals and Fairs Committee — as an opportunity to display local dishes that are “native to who we are as a people.”

Ms. Vanterpool, who has participated in the annual fair for at least 10 years, also bakes other local pastries. But this time she chose to set up the cassava bread demonstration to allow people a window into her process.

At her booth, she displayed a step-by-step recipe and made the bread as attendees sampled two varieties: plain and coconut-cinnamon.

Many other vendors were similarly passionate about cultural preservation through local foods.

Jehree D. Clarke of JD’s Candies said she is interested in “keeping local candy-making alive.” The business, which has been part of the annual fair since 2016, specialises in local sweets such as peppermint candy, coconut fudge, guavaberry fudge, and more.

As the food fair concluded, UMI models used the pathway through the pier park to model designs in the 28th annual Festival Fashion Fete.

The show included a variety of outfits for child and adult models alike.