The Covid-19 outbreak in the Virgin Islands shows few signs of slowing down, with at least 19 people dead over the past nine days and health workers struggling to respond …

END_OF_DOCUMENT_TOKEN_TO_BE_REPLACED 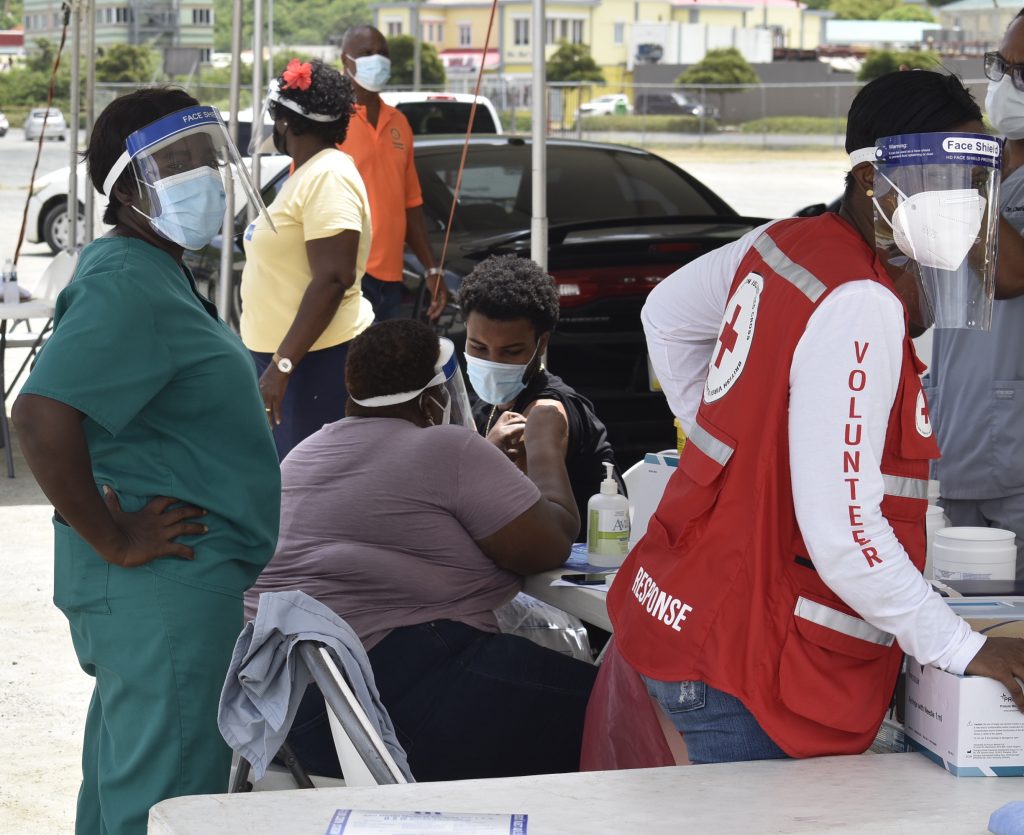 More than 885 vaccines have been administered at the recently erected drive-thru vaccination site in Road Town. Government is trying to achieve herd immunity while the territory’s health care system struggles under the pressure of the Virgin Islands largest surge in Covid-19 cases, hospitalisations, and deaths. (Photo: JOEY WALDINGER)

The Covid-19 outbreak in the Virgin Islands shows few signs of slowing down, with at least 19 people dead over the past nine days and health workers struggling to respond as 1,604 known active cases ravage the community.

To fight back against the disease, which so far has killed only unvaccinated people in the territory, government is mounting its biggest vaccine drive yet.

Dubbed “Operation Protect Each Other,” health officials and volunteers set up a drive-through centre at the FestivalVillage Grounds and administered 887 doses of the vaccine over the weekend.

For Rotarian Ellie Crespi, who had spent much of the past few weeks despairing over the situation, volunteering with the effort offered a measure of relief and helped her understand the hesitancy many feel towards getting the vaccine.

“To stand there for four hours was real eye-opening. … I saw how scared people were,” Ms. Crespi said Tuesday, adding,“It taught me that a little bit of empathy and support will go along way towards getting this population vaccinated.”

The drive-through site will remain open at least until Sunday, and though Rotarian Ryan Geluk said it remained fairly busy on Monday, interest appeared to wane on Tuesday.

Despite the gains made in recent days, the territory had only fully vaccinated 10,881 people as of Tuesday, just over a third of the territory’s estimated population of some 30,000.

But in a July 8 Facebook broadcast, Chief Medical Officer Dr. Ronald Georges described a model that “suggested we require second-dose vaccination completion to be as high as 80 percent to blunt the impact of this present outbreak.”

Meanwhile, the health care system is buckling under the pressure of the surge.

The BVI Health Services Authority last week issued a plea for retired health care workers to join its Covid-19 Locum Bank to try and take the strain off an overburdened workforce, and Dr. Georges announced on July 11 that there will be strict criteria for general admission to the hospital in order to concentrate resources on the infected.

These and other preventive measures, including a nightly curfew that will stay in place until August, have so far proven insufficient in staving off deaths, which have been reported with increasing frequency over the past two weeks.

Between July 8 and 13, government reported three Covid-related deaths, for a total of four since the pandemic began.

Among those who died recently were the owner of a popular Baughers Bay bar, a deejay, and a police sergeant.

However, Police Information Officer Diane Drayton said on Friday, the day before the sergeant died, that of the 45 officers who had been self-isolating, 26 had tested negative and would now help to enforce the curfew order.

Hospital beds are filling up as well, with 24 Covid patients hospitalised as of Sunday, only one of whom had been vaccinated, according to a Sunday press release from the Ministry of Health and Social Development.

Of the hospitalised patients, three were admitted to the emergency room; 16 to the Covid-19 Ward; one to the Behavioural Health Unit; and four to the Intensive Care Unit, the release stated. In preparation for a potential overflow of Covid patients, the BVIHSA has erected a field hospital in the Multi-purpose Sports Complex, but Dr. Georges said this last resort has not yet had to be used, as health officials are managing the surge by reorganising their operations within the Dr. Orlando Smith Hospital.

Dr. Georges also said the lockdown measures have slowed the rate of transmission.

While the number of active cases will likely continue to fluctuate, he does not expect it to rise as sharply as it did earlier this month, when it spiked from 13 on June 29 to 821 over the course of nine days.

The Ministry of Health and Social Development reported 1,604 active cases on Tuesday, a slight increase from the 1,596 reported on Friday.

Residents previously speculated on social media that test numbers may have dropped as a result of a slowed rate of testing, as government has publicly changed its strategy to put a bigger emphasis on isolation than on mass testing.

Dr. Georges, however, told the Beacon on Monday that health workers have been processing around 800 tests per day.

Besides a dip in productivity shortly after the territory recorded 1,200 active cases, he said via WhatsApp, “We never slowed down; we are running at the same pace every day.”

But as the number of infected residents is still hovering around 1,600, dwarfing any of the outbreaks that came before —which never exceeded 52 active cases at one time — health and government officials are continuing their plea for residents to stay home as much as possible and to limit contact with others.

Health and Social Development Minister Carvin Malone announced on Friday that the 7 p.m.-to-5 a.m. curfew will renew on July 23 and stay in effect at least until Aug. 6.

However, as an attempt to ease the burden on hotels and resortst hat have suffered for more than a year in a depressed economy, they will be able to serve dine-in meals to overnight guests, “provided that all prescribed public health measures are strictly observed,” according to an amendment to the most recent Public Health Order Gazetted on Friday.

The BVI Ports Authority is also readying for a novel attempt at accommodating cruise tourism during the pandemic.

While the Seabourn Odyssey was allowed to call in the territory yesterday and is scheduled to return on July 29, none of its passengers or crew members are allowed on shore, the BVIPA announced Monday.

Instead, passengers of the Odyssey— which is scheduled to call at White Bay, Peter Island — will be permitted to use the ship’s “marina” to “enjoy water-based activities,” according to the BVIPA.

Even before the outbreak, tourism numbers were expected to dwindle in the coming months, according to BVI Tourist Board statistics that Premier Andrew Fahie announced on June 25, and it remains to be seen whether the dangerous conditions will drive the numbers down even further.

Meanwhile, on Monday the United States Centres for Disease Control and Prevention issued a level four “do not travel” advisory for the territory, indicating a “very high level of Covid-19.”

Similarly, the United Kingdom has moved the territory to its “amber list,” and USVI Governor Bryan Albert Jr. announced last Thursday that people must obtain a negative Covid test result no more than 48 hours before traveling from this territory to that one.