Commissioner of Inquiry asks airport boss to resubmit his affidavit

After BVI Airports Authority Managing Director Clive Smith testified before the Commission of Inquiry for a little over an hour on Monday, COI Commissioner Sir Gary Hickinbottom ended the hearing …

END_OF_DOCUMENT_TOKEN_TO_BE_REPLACED 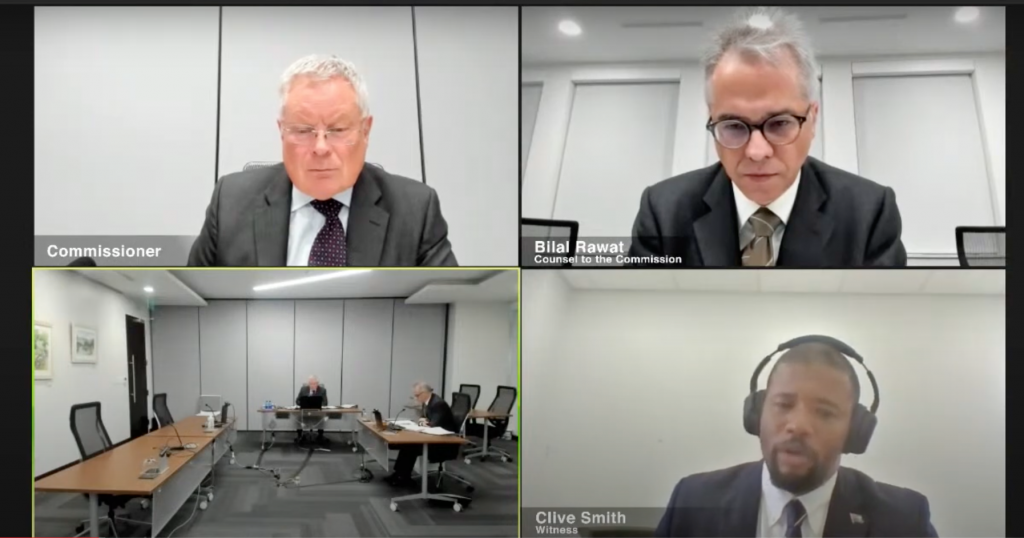 After BVI Airports Authority Managing Director Clive Smith testified before the Commission of Inquiry for a little over an hour on Monday, COI Commissioner Sir Gary Hickinbottom ended the hearing early.

Mr. Smith, he explained, had submitted an inaccurate affidavit and failed to provide several requested documents, making it impossible for the COI to conduct an efficient hearing.

According to Sir Gary, Mr. Smith was directed to prepare an affidavit in the first place because some of the documents previously submitted to the COI were inadequately prepared, making it difficult for the commissioner and his colleagues “to understand what story they told.”

“I think it’s clear from this morning’s hearing that … your affidavit is, to say the least, extremely disappointing, because there are a lot of documents … clearly falling within the request which have not been produced,” Sir Gary said.

He then directed Mr. Smith to submit a revised affidavit by 4 p.m. Monday and called the testimony to a close.

During the hearing, COI Counsel Bilal Rawat also asked Mr. Smith why he had submitted the affidavit even though the letter requesting it was addressed to BVIAA Chairman Bevis Sylvester. Mr. Smith replied, “I was probably the better person because a lot of the information has to do with … activity that took place before 2019.”

He added, “But to be completely sure, that question should be directed to the chair.”

Mr. Rawat then asked Mr. Smith if he had volunteered to submit the affidavit instead of Mr. Sylvester or had been instructed to do so.

“I received a letter and I responded to the commission. I had no conversation with the chairman,” Mr. Smith replied.

Mr. Smith replied, “This was a standard format letter that I used when we were putting the affidavit together.”

In another paragraph, Mr. Smith wrote that he did not “waive any privilege” in respect to the affidavit.

Mr. Rawat pressed Mr. Smith on the meaning of this paragraph, asking him what exactly he meant.

“What I’m asking you about is what is the kind of privilege you are asserting,” Mr. Rawat said. After a brief pause, Mr. Smith replied, “I don’t know. I don’t have an answer for that.”

He then explained that he had borrowed the wording for the affidavit from another document previously sent to the BVIAA.

Mr. Rawat also asked Mr. Smith about a statement in the affidavit regarding his communications with government and COI officials, which Mr. Smith admitted was inaccurate.

Reading from the affidavit, which was not released to the public as of press time, Mr. Rawat said that Mr. Smith claimed in the document that he forwarded the COI’s request for the affidavit to Carolyn O’Neal Morton, permanent secretary in the Premier’s Office.

According to the affidavit, Ms. O’Neal Morton then informed Mr. Smith that the request “was forwarded” to the government’s Inquiry Response Unit “for onward forwarding to the COI,” Mr. Rawat read.

Upon further questions from Mr. Rawat, Mr. Smith explained that he had sent the letter to Ms. O’Neal Morton but did not receive any response from her.

Mr. Rawat responded, “So if you look at paragraph nine of this affidavit that you signed, that’s inaccurate?”

“Yes, that would be inaccurate,” Mr. Smith replied.

Before Sir Gary called an early end to Mr. Smith’s testimony, Mr. Rawat asked the managing director about some of the policies guiding BVIAA operations.

In what Mr. Rawat called “a paper that accompanies that affidavit,” Mr. Smith included answers to some of the questions asked by the COI, including information about the “framework law, policy and practices” regarding the procurement and management of construction contracts, Mr. Rawat said.

However, responding to questions from the COI counsel, Mr. Smith explained that these policies are unwritten.

“That’s how we operate,” Mr. Smith said, adding,“There’s not a written policy as yet, but there’s one that we’re currently putting together.”

Asked by Mr. Rawat how long this “unwritten policy has been in place,” Mr. Smith responded, “As far back as I can remember.”

The COI counsel then asked why the authority is only now putting these policies into writing, considering that Mr. Smith has been involved in BVIAA operations for 12 years.

“I don’t know; I don’t have an answer for that. I can’t speak on the previous administration,” Mr. Smith said.

He added that the unwritten policy is based on the practice in central government.

“Did someone tell you,‘That’s how central government does it, so we’re just going to do it that way,’ or effectively on day one when you walked into your job over 12 years ago, has it always been that that’s the approach that is adopted in the Airports Authority?” the counsel asked.

Mr. Smith replied, “It has been my understanding that that’s the general policy that the [BVIAA] has adopted.”

Mr. Rawat then asked Mr. Smith when he initiated the transition from unwritten to written policies.

“I can’t pinpoint to a specific timeframe,” Mr. Smith said, though he added that the BVIAA has been working on writing the policy for about eight months.

Mr. Smith gave a similar answer when asked if there are any other unwritten policies under which the BVIAA operates.

“Maybe, but I can’t pinpoint any at this current time,” he said.

He added that completion of a “review” of BVIAA policies should “weed out” any other unwritten rules regarding the procurement, managing, and monitoring of contracts.

Mr. Rawat asked where the BVIAA will get the original information to inform its written policies.

“Well, I would do it in conjunction with the sole shareholder of the airport, which is central government,” Mr. Smith said.

“And is that what you’re doing at the moment?” Mr. Rawat asked, adding, “Are you working in conjunction with your sole shareholder?”

Mr. Smith responded, “The sole shareholder has not seen a draft of the policy.”

Mr. Rawat then asked for the title of the policy.

“I don’t recall the exact title of the policy,” Mr. Smith replied, though he added that a draft is currently available.

After questioning Mr. Smith about the BVIAA’s tender policies, Mr. Rawat then asked him about the authority’s plans to resurface the runway at the Taddy Bay Airport on Virgin Gorda.

Although Mr. Smith confirmed in his affidavit that a request for proposals was published for the design and oversight of that project, and that a tender had eventually been awarded to a Canadian firm, Mr. Rawat said he did not provide the COI with any “pre contract correspondences or documents on which a decision to award a contract was based.”

Mr. Rawat then asked Mr. Smith why he didn’t provide the RFP document.

“I don’t have an answer for that,” Mr. Smith replied.

Asked whether the BVIAA had received expressions of interest from other companies, Mr. Smith replied, “I honestly don’t recall.”

But responding to further questions from Mr. Rawat, Mr. Smith then said that Dexter Construction Company and Herzog Caribbean Limited had both expressed interest in the project. Mr. Rawat then asked Mr. Smith if there were at least two RFPs that hadn’t been disclosed to the COI, as well as pre-contract correspondences with Dexter, Herzog, and the other Canadian firm.

Mr. Smith answered in the affirmative.

Mr. Smith also answered in the affirmative when asked if there would be minutes from board meetings in which the various tender proposals were discussed.

“Doesn’t it follow, Mr. Smith, that there is a tranche of documents that you ought to have provided in response to this letter of request for an affidavit?” Mr. Rawat asked.

“There are documents that I need to submit to the commissioner,” Mr. Smith replied.

When the COI reconvened, he announced that the hearing would end early due to the inaccurate affidavit and incomplete documents prepared by Mr. Smith.