A day charter boat with history

As the Anne Bonny drifts past the cruise pier, an ethereal female voice pours out of the speakers: “Villainous, infamous, Anne Bonny…”. Next to the massive, gleaming cruise ships moored …

END_OF_DOCUMENT_TOKEN_TO_BE_REPLACED 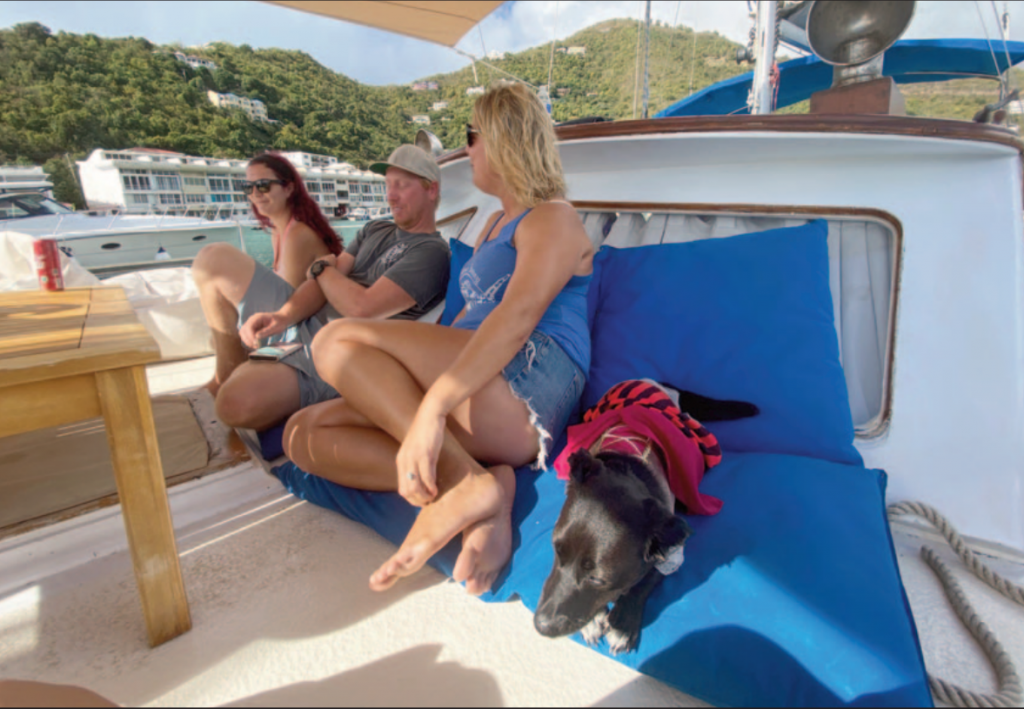 Crewmembers Natalie Carnell, Daisy Wells and Jared Brett relax on deck of the Anne Bonny — a 50-year-old day charter boat — during the beginning of a trip. (Photo: DANA KAMPA)

As the Anne Bonny drifts past the cruise pier, an ethereal female voice pours out of the speakers: “Villainous, infamous, Anne Bonny…”.

Next to the massive, gleaming cruise ships moored at the pier, the wooden 50-foot sailing ketch, with its weathered decks, brass hardware and traditional rigging, looks and feels like a traveler from long ago.

Of course, for a vessel named after one of the most notorious female pirates to ever sail the Caribbean — and a startup business that managed to stay afloat during a global pandemic — it’s ideal, according to owners and co-captains Daisy Wells and Jared Brett.

Besides being the only day charter boat in the Virgin Islands with a theme song, it’s also unique in that it has a history stretching back 50 years.

Built in Taiwan in 1972, the boat’s history doesn’t quite date as far back to when the original Anne Bonny was plundering the high seas in the 18th Century, but she has seen her share of misadventures in the past half-century.

The smugglers even hid drugs in the mast, Mr. Brett explained.

Though the VI has previously been home to other wooden charter boats like the Anne Bonny, many haven’t lasted. According to the crew, similar boats ended up wrecked in Hurricane Irma or before.

One was the long-running White Squall.

“We’ve heard a lot about it since we started this,” Ms. Wells said. “And people have kind of compared us to it a little bit. It was a bit bigger than our boat, but it was the same kind of ‘we’re not too formal’ vibe.”

The crew revel in that vibe, often joyfully unfurling the sails while dressed up in gaudy pirate gear.

Their dog, Booty, also wears a costume and joins in the fun.

Children especially seem to love the swashbuckling atmosphere, they said. In fact, the owners recently hired crewmember Natalie Carnell because “she kind of looks like a pirate,” Ms. Wells said with a laugh. “Sometimes she gets too much into the role.”

The crew often marvel that they have a business at all, given that they got started “obviously, in the worst time we could: in the middle of Covid,” Mr. Brett said. “But it was almost a blessing because we didn’t have any charters. And we did have a lot of issues, because like a lot of new boats, we didn’t know it worked properly; there was stuff breaking down. And we just had enough time to deal with all that.”

Meanwhile, they used their spare time to figure out how they would keep going during the almost complete shutdown in tourism, and ultimately turned to a sometimes-overlooked customer source: VI residents.

“I felt like there were a lot of residents on island who may be getting overlooked by the rush to get tourists on the boats. But then with it being Covid, they were the only people to market to anyway,” Ms. Wells said.

Some residents, she added, charter as often asonce a month.

“And we’re like, ‘You wantto come back?’” she said. “It’snot that I think the boat’s notgreat, but the fact that they’rejust coming out week afterweek, month in, month out,just makes us really proudthat we clearly hit the nail onthe head.”