At Saira Hospitality School, learning the meaning of service

If students arrive even a minute past the start of class at Saira Hospitality pop-up school, they’re late. If they arrive ten minutes late, they’ve officially missed the class. If …

END_OF_DOCUMENT_TOKEN_TO_BE_REPLACED 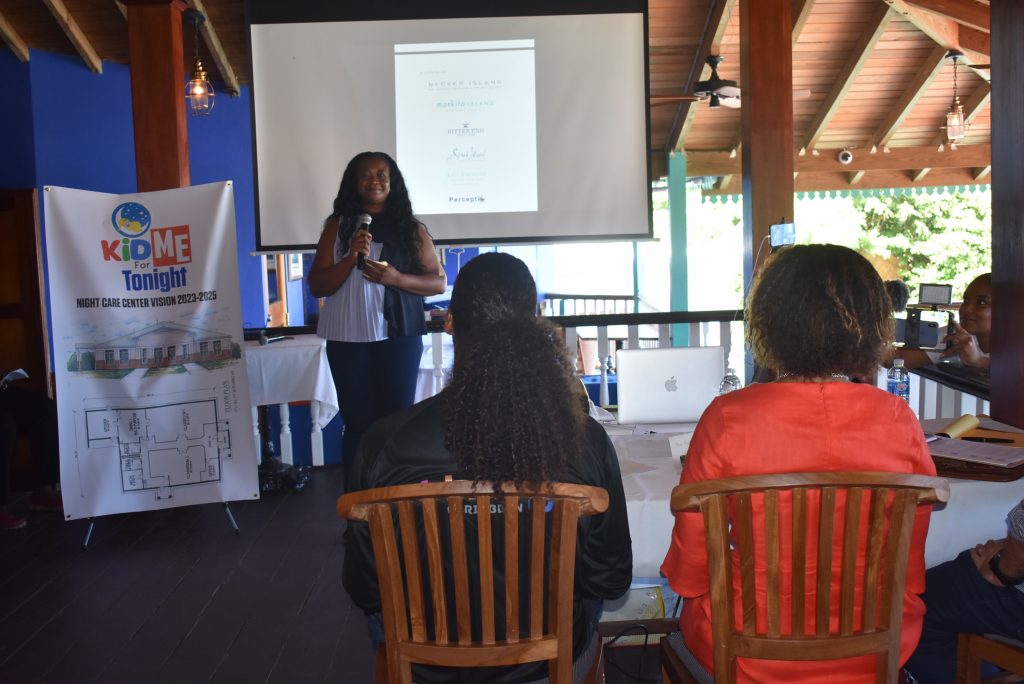 Saira Hospitality student Cathy Richards presents her winning idea, “Kid Me for Tonight,” in front of a panel of judges on Saturday at Leverick Bay Resort and Marina as part of a pitch session for students of the pop-up school. (Photo: CLAIRE SHEFCHIK)

If students arrive even a minute past the start of class at Saira Hospitality pop-up school, they’re late. If they arrive ten minutes late, they’ve officially missed the class. If they miss three classes, they’re out.

This was the first lesson students had to learn on day one, said the school’s founder and chief executive officer, Harsha Chanrai.

“You should have seen the response that day in class,” she said. “They had stuff to say about it. They’ve already been through four interviews to get to this round.”

But, she said, the policy is necessary to convey the high standards the school expects of its 79 Virgin Islands students, who pay $150 tuition to complete the eight-week, 16-hour-a-week course, which works to cultivate what Ms. Chanrai refers to as the “hospitality gene.”

Afterward, successful graduates will earn a “Service Excellence Certificate” from Cornell University’s School of Hotel Administration, and the chance to interview with Saira’s “brand partners,” which include Rosewood Little Dix Bay, the resorts on Necker and Mosquito islands, Scrub Island Resort and Marina, and Bitter End Yacht Club.

The high standards of such resorts are part of the reason for the strict attitude about tardiness, Ms. Chanrai explained.

“I don’t want to be recommending Saira graduates to our partners who are going to show up late,” she said.

In fact, the course has already proved too challenging for some of the initial 225 applicants. As the school enters its final week, enrollment has dwindled to 79 from an initial class of 92, and Ms. Chanrai expects to lose more.
Part of the reason for the dropout rate, she explained, is that students in the VI don’t have the same mindset as others she’s taught in the United States and Mexico.

There, “there’s no needing to convince them” of the importance of providing stellar service, she said; here, “you have to change the mindset.”

It took students a couple of months, she added, to learn the difference between “service and servitude.”
Ms. Chanrai even had to extend the deadline at first because of the dearth of applications. But ultimately the dropouts don’t bother her.

For those who have stuck with it, field trips have been a perk of the curriculum, including tours of the boutique eco-resort at Cooper Island Beach Club, the upscale luxury facilities at Oil Nut Bay, and five-star dining at CocoMaya Restaurant.

“It’s kind of blowing them away,” Ms. Chanrai said.

Many of the students had not visited the establishments before. “We also teach nutrition. They’re like, ‘We’re still hungry,’” she added with a laugh. “‘This isn’t enough food.’”

But Saira’s goal is to convey that fine dining is about atmosphere and service as well as food. “This isn’t about quantity, it’s about quality,” she said. “It’s not about filling yourself till you’re so full: It’s about taking in the rest of
the experience as well.”

More than 100 graduates have already finished programmes in downtown Los Angeles and Los Cabos, Mexico, and a permanent school will open soon in the Turks and Caicos Islands.

She explained that the sessions can help reduce turnover and training time and save on importing workers from abroad. Ms. Chanrai reported that the total turnover — meaning the number of employees who have quit or been let go from their positions a year after being hired — was zero percent for the first year of the programme.

In the VI, the school utilised almost a dozen instructors from VI businesses as diverse as Peter Island Resort, Red Rock Villa and Chic Gourmet.

One trainer, EC Soap. Co. founder Alexandra Durante, taught the entrepreneurship unit for four hours a day on top of her full-time job.

“I don’t even know if she’s looking for compensation,” Ms. Chanrai said. “She’s really passionate and inspired by this whole project.”

Big ideas
The VI session, besides being the first Saira school in the Caribbean, was historic for including the first-ever pitch session for Saira entrepreneurs, which took place Saturday at Leverick Bay Resort and Marina. The pitches included proposals for an indigo farm, a water park, an eco-resort and a bicycle rental business. But the grand prize went to Cathy Richards for her proposal for an overnight drop-in child care centre called “Kid Me for Tonight.”

Her personal experience of caring for her ill daughter swayed the judging panel, which consisted of Nikki Antonio-Gadsdon, people and development director of Necker and Moskito islands; Chad Lettsome, founder of the fintech app Ching; and Sjoerd Koster, general manager of VP Bank, who awarded Ms. Richards $1,000 toward launching her big idea.

“I think you should take this beyond the British Virgin Islands,” he said. “Your passion for this is evident You are the right person to accomplish this ”

Sir Richard Branson, the billionaire owner of Necker Island, was on hand to offer advice to the budding businesspeople, pointing out that hospitality helped him build Virgin Atlantic into one of the world’s top airlines.
“We said we can create the kind of airline that people would love to fly on,” he said. “If the cabin crew is happy and smiling and look after your staff, then the guests will be happy too.”

He added that profit and good works are not mutually exclusive .

‘Do not limit yourself’
Ms. Chanrai said she was blown away by the success of the pitch session and will likely continue it in future courses.
“I think it’s really important for them to start thinking as entrepreneurs and leaders — …not just, ‘I’m an entry-level employee,’”she said.“And the hotels want to invest in the community to build entrepreneurs.’”

Ms. Richards, a journalist at JTV who has worked in hospitality in the past, said she first learned of the course on Facebook while keeping a vigil in her daughter’s hospital room, and decided to sign up because she was looking for something different to do with her life.

But the course’s high standards soon forced her to raise her game. She missed the first class, she explained.
“I received a call: ‘Why didn’t you come?’ That pushed me to go on.”

The course was valuable because “it has a structure; it takes you into depths and is, more than anything, current,” she said. “The experience tells you, do not limit yourself. There is always room for improvement.”