Albert Wheatley, whose story was one of many featured in The Irma Diaries by Angela Burnett, stood before an assembly at Alexandrina Maduro Primary School, vividly describing chasing his jeep …

END_OF_DOCUMENT_TOKEN_TO_BE_REPLACED 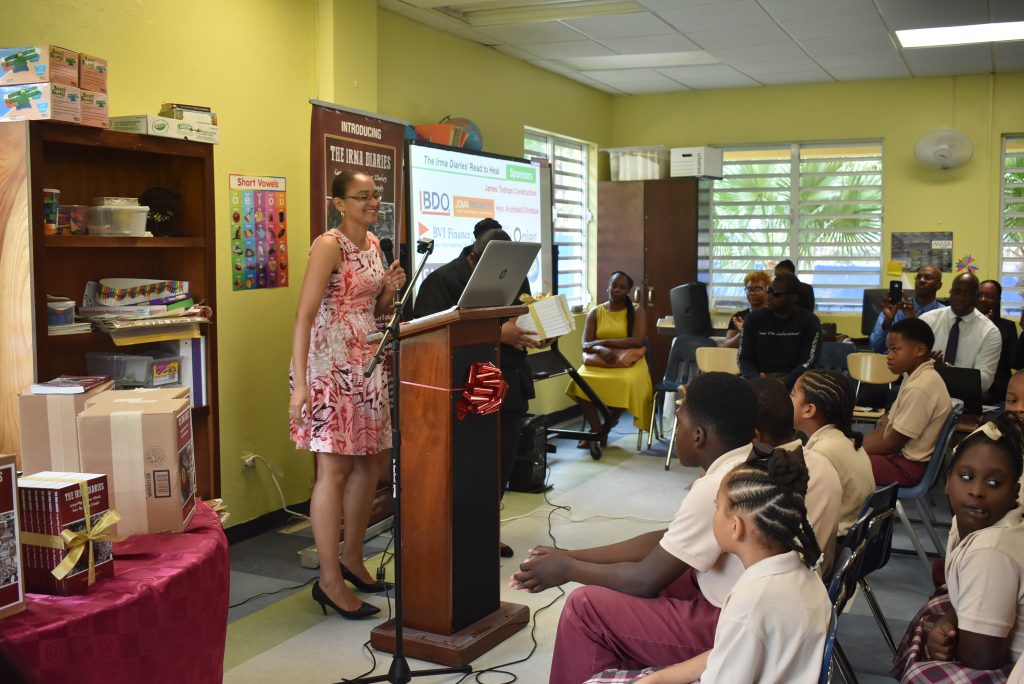 Angela Burnett, author of The Irma Diaries, speaks to students at Alexand- rina Maduro primary School on Monday as part of the launch of the Read to Heal programme, in which volunteers will share survivor stories and educate students about the effects of climate change. (Photo: CLAIRE SHEFCHIK)

Albert Wheatley, whose story was one of many featured in The Irma Diaries by Angela Burnett, stood before an assembly at Alexandrina Maduro Primary School, vividly describing chasing his jeep as it was blown down a steep hill in Hurricane Irma.

He then asked the students what they thought he should do now.

“What category storm do you think I’m going to prepare for?” he asked them.

They guessed numbers from one through five, but the boy who guessed correctly was thinking bigger.

That lesson is exactly what Ms. Burnett hopes to get across to students with the new Read to Heal programme, which she launched Monday during an assembly of students from the Baughers Bay primary school and the nearby Virgin Islands School of Technical Studies.

With the help of more than a dozen sponsors, Ms. Burnett, who is also the climate change officer for the Ministry of Natural Resources and Labour, is donating 200 copies of The Irma Diaries to schools across the territory in order to help educate children about the real-life effects of climate change, get them thinking about preparing for future storms, and help them “return to a place of happiness and hope” after their own traumatic experiences, she said.

Eventually, the programme may expand to include lessons to be integrated into the school curriculum so that future gener- ations can also learn from them.

In the programme, she explained, volunteers will journey to primary and secondary schools throughout the territory to read to children.

They will include survivors featured in the book, as well as Miss World BVI Yadali Thomas Santos, and Ms. Burnett said she is still searching for additional sponsors and volunteers.

“It is my hope that through Read to Heal, students will be able to process a lot of the lin- gering emotions and impacts from Hurricane Irma,” she explained.
She added that many people have told her that reading the book was “therapeutic.”

Writing it, she said, was similar.

“This experience has allowed me to meet some of the most resilient, courageous and optimistic people I know,” she added.

Education and Culture Minister Myron Walwyn, who attended the ceremony to accept the donations on behalf of the ministry, said the programme is important to get students think- ing about the legacy of Irma.

“Now you have an experience of your own that you will tell to your children many years from now,” he said, adding, “When things happen to us, there are lessons that we can take away from it.”
Already, he said, the mi istry is educating students about steps they can take to combat climate change, which can be as “simple as turning off a light switch when you leave the room.”

The ministry’s recent initiative to start school gardens, he added, is another way the territory can combat food insecurity and become more resilient against future storms. Principal Desiree Fahie-Butler accepted a box of books on behalf of the territory’s primary schools.

“What better way to reflect on the experinces of this horrific day than through the pained words of numerous survivors?”she asked.“We extend our gratitude to Ms. Angela Burnett for having the insight to compile these candid experiences to ensure that these memories are forever etched in the memoirs of the Virgin Islands.”