BVI DanceFest a success at Save the Seed Energy Centre

When people asked Sandy Lyons, long-time director of the BVI Dance School, whether the 18th Annual BVI Dance Fest could go on after Hurricane Irma, she asked herself, “‘Oh, Lord, …

END_OF_DOCUMENT_TOKEN_TO_BE_REPLACED 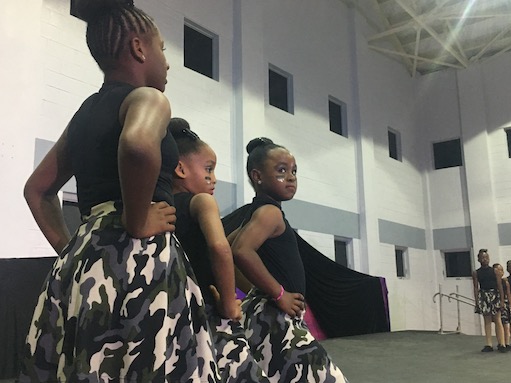 Dancers from the Virgin Islands Dolls prepare to take the stage at BVI Dance- Fest on Sunday at Save the Seed Energy Centre. (Photo: CLAIRE SHEFCHIK)

When people asked Sandy Lyons, long-time director of the BVI Dance School, whether the 18th Annual BVI Dance Fest could go on after Hurricane Irma, she asked herself, “‘Oh, Lord, do we have the strength?’”

“We never thought we would get this done,” Ms. Lyons said. “To say that this has been a very trying year would of course be an understatement.”

The school lost its spaces in Prospect Reef and at Sensus Gym, and the Sir Rupert Briercliffe Hall, the traditional venue for DanceFest, was also badly damaged. Add to that instructors who left the territory and costumes that were blown away in the storm.

But the school proved to have the strength after all, as dancers and their families packed the gym Sunday night at Save the Seed Energy Centre in Duffs Bottom. “This the first year we’ve ever had to change venue,” Ms. Lyons explained. “We had to bring in our own stage and rent this place. We did not want to cancel this show. Everyone said we have to have a show. And by God we did.”

In fact, according to the di- rector, the support she received from dancers, their families and other community members made the event stronger than ever. Sasha Creque, director of Adagio Dance School, stepped up to the plate by sharing studio space in Fish Bay.

“We are so grateful,” Ms. Lyons said. “Dancers helping dancers. We are so blessed.”

Turnout had to be limited this year because the gym only holds 500, whereas Sir Rupert Briercliffe Hall holds around 1,200.

“We didn’t even advertise it to the public this year, which was heartbreaking,” she said, adding that turnout may be even bigger “next year if we can get into [H. Lavity Stoutt Community College]. We’d have to have at least two shows.”

Parent Donna Mae Nelson and her children were all smiles as they left after the performance. She acknowledged that finding the venue was challeng- ing, but she said that the event did not disappoint.
“My children have been in dance for the past three years and every year it is phenomenal,” she added. “Miss Sandy and all the teachers did a wonderful job.”

Festival troupe
The school’s August Emancipation Festival troupe even got a chance to show off the routine they practised last year but never got to perform due to the Au- gust floods.“We had almost 40 girls strong, and they were ready for it and weren’t able to do so,” said troupe instructor Sylvanna Charles. “Some of them have re- located after the storm; some of them weren’t able to have their costumes ready because they were lost in the storm. [But] I think it was just fitting to let
them perform with the chance that they didn’t get.”

Bubbling over
The essence of the event — which featured hundreds of dancers from toddlers through teens showing off their best moves in styles ranging from ballet to jazz to modern to hip- hop — hadn’t changed.

This year, the talent pool also included support from Adagio Dance School, Nouveau Royale, the Virgin Island Dolls, and the all-male Dub Squad, whose comedic masked routine near the end of the night had the audience howling with laughter when a dancer “passed out” on stage only to have his fellow troupe member steal his shoes.

Ms. Lyons described herself as “bubbling” as exuberant parents and teachers filed out of the venue.

“Normally when we have 1,200, that’s great, too,” she said. “But this year, with the efforts from all of the students and all of the teachers to make this happen, to bring the community some normalcy after our terrible year, we’re just thrilled.”