While new numbers show that many tourists have stayed away from the Virgin Islands following the devastation from Hurricane Irma, the BVI Tourist Board is banking that cultural attractions and …

END_OF_DOCUMENT_TOKEN_TO_BE_REPLACED 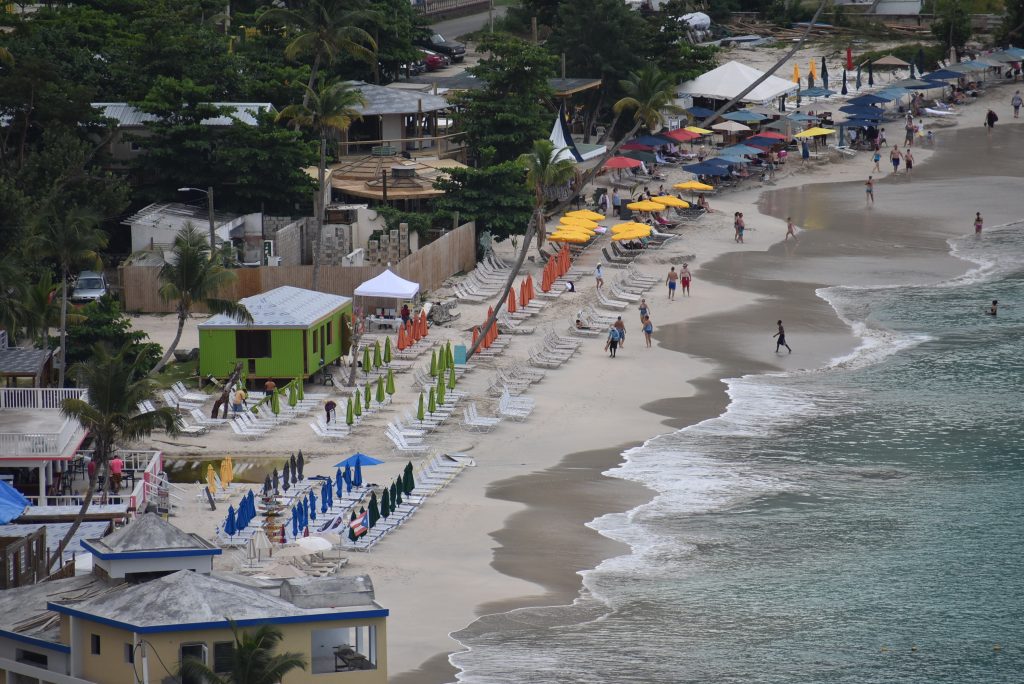 Beachgoers, including passengers from the Disney Fantasy cruise ship, splash in the water in Cane Garden Bay earlier this month. (Photo: CLAIRE SHEFCHIK)

While new numbers show that many tourists have stayed away from the Virgin Islands following the devastation from Hurricane Irma, the BVI Tourist Board is banking that cultural attractions and splashy ad campaigns will help shore up the numbers in an industry struggling to get on its feet.

In a media breakfast Thursday, Nov. 15 at Stonehaven Restaurant in Port Purcell, Tourism Director Sharon Flax-Brutus didn’t dwell on statistics that showed that overnight visitors in the first eight months of 2018 had dropped almost 60 percent from last year.

“We’ve been through challenges,” she said, adding, “We remain excited about tourism, excited about sharing how beautiful and special the BVI

The board, she explained, is committed to developing a strategic plan for tourism in the VI, to be due in early 2019.

“Work has already begun on this project,” she said.

The plan, she added, will include a renewed push toward urging the territory’s residents to explore other islands.

“We know we have 60 islands, so we consider inter-island tourism as much as foreign tourism,” she said.

Tourism by the numbers

The number of overnight tourist arrivals in 2017 plunged to 334,630, an 18 percent decrease from the previous year that BVITB officials attributed entirely to the storms.

New numbers released last Thursday showed that overnight tourists, including land-based and yachting visitors, numbered 133,425 between January and September of this year, compared to 334,630 in all of 2017.

Meanwhile, however, cruise ships are once again a daily sight at the pier.

The returns of Disney and Norwegian cruise lines were heralded with much fanfare, and long-popular spots like Cane Garden Bay are once again hosting crowds of passengers in beach chairs.

However, their long absence after last year’s storm meant that the cruise ship sector didn’t fare any better than other sectors. Overall, only 45,785 passengers arrived in the territory during the first nine months of 2018, compared to 409,723 for all of 2017.

Tim Schaaf, a charter yacht owner and captain, told the Beacon in August that of the roughly 900 bareboat and crewed charter yachts in the territory prior to Irma, he estimates that some 500 to 540 were completely destroyed.

As of last Thursday, the territory had a total of 2,930 beds at sea — down from 4,370 prior to Irma, according Keith Dawson, the BVITB public relations manager.

However, Mr. Schaaf estimated that the territory would be back to its overall 900-vessel level by the 2019-2020 winter season.

According to statistics provided by the BVITB, Irma damaged about 75 percent of territory’s hotel room inventory, which consisted of 2,700 hotel and villa rooms prior to the storms. As of last Thursday, 824 were available, representing around 30 percent of the total. That’s only a small uptick from the 769 that Mr. Dawson reported in early September.

Officials said they don’t have clear timelines for when more rooms will open because some of the largest properties haven’t been communicating them clearly.

“Unfortunately, some properties are being very vague,” Mr. Grant said. “Maybe they have snags in their timelines; maybe they’re not sure on how the finances are going to go … If we do get exact dates, we have that information on file and we can share it as accurately as it is given to us.”

On Virgin Gorda, Rosewood Little Dix Bay and Bitter End Yacht Club both have announced vague opening dates in 2019, while Yacht Club Costa Smeralda told the Beacon recently that it hoped to reopen by the end of this year. Meanwhile, it’s not clear when Peter Island Resort and Spa will reopen or even start major reconstruction.

One ray of hope, according to Clyde McCoy, film commissioner and liaison officer, is the Hotel Aid Programme, through which VI properties can apply to receive duty concessions in the material that they bring into the territory to rebuild. He said the process is going more quickly than he anticipated.

“All of the major properties … have applied for it and they are all going in the system right now,” he said.

For now, the board is concentrating on new focus areas, venturing beyond sun and sand to shine a light on the territory’s culinary and cultural attractions.

But according to board consultant Trefor Grant, rehabilitating the VI’s museums, none of which has been functioning since Irma, is likely still a long way off.

Mr. Grant explained that even though the board takes an interest in the territory’s museums, they do not fall under its jurisdiction. That said, Norwegian Cruise Line has lately stepped up to help rehabilitate Her Majesty’s Prison Museum and the Sugar Works Museum.

“It won’t cover the entire cost of the rehabilitation, but it can get it to the point where it can see guests again,” he said. The Government House Museum is also slated to be rehabilitated, but as with many other projects, Mr. Grant said, “funding is an issue right now.”

Other cultural initiatives are in the pipeline, too, including identifying some of the territory’s historic wooden homes to serve as “living museums.”

“We will rehabilitate them so they look basically how they used to look in the olden days,” with Anegada’s Faulkner House as a model, Mr. Grant said.

Future plans also include placing hammocks at some of the territory’s most popular beaches, and installing telescopic viewers at locations including Sage Mountain on Tortola and Great Harbour on Jost Van Dyke, similar to ones overlooking the salt ponds on Anegada, which have proved popular, according to Mr. Grant.

New destination signage is also being installed, starting with Anegada and having recently moved on to Tortola.

“The new signage is hurricane proof and we are also going to be removing the signage once we get fair warning of the hurricane that’s impending,” Mr. Grant said.

Ms. Flax-Brutus pointed out that tourism is changing fast, especially with the arrival of “disruptors” like Uber and AirBnB. To keep up, the BVITB has hired Nancy J. Friedman Public Relations, a data-driven company with several United States branches, and consultants from AYS World, a sports management and marketing firm based in Philadelphia.

BVITB Deputy Director Rhodni Skelton explained that the territory will rebrand its logo to resemble sailcloth to reflect the VI’s nautical tradition.

“After the hurricane, the very first market to come up was sailing,” he said.
Meanwhile, a new ad campaign has captured hundreds of user-generated images and posted them on social media, which Mr. Skelton said was cheaper and easier than hiring professional photographers.

In June, the agency launched a “BVI Reborn” ad campaign, focused on the natural sights of the territory, like The Baths, that remained unspoiled from the storms.

Food will also be a focus in the years to come, he added.

“Right now culinary is something we are holding on to,” he said. “We want to make sure that BVI Food Fete is the premier culinary event in the Caribbean.”
According to Ms. Flax-Brutus, the board recognises that competitors may offer similar attractions as the VI.

“But we remain confident that our BVI and what we offer is special,” she said. “And we must make sure that we nurture this.”