As residents struggled to stay afloat during the Covid-19 border shutdowns two years ago, House of Assembly members were each allotted an extra $300,000 to disburse to needy residents as …

END_OF_DOCUMENT_TOKEN_TO_BE_REPLACED 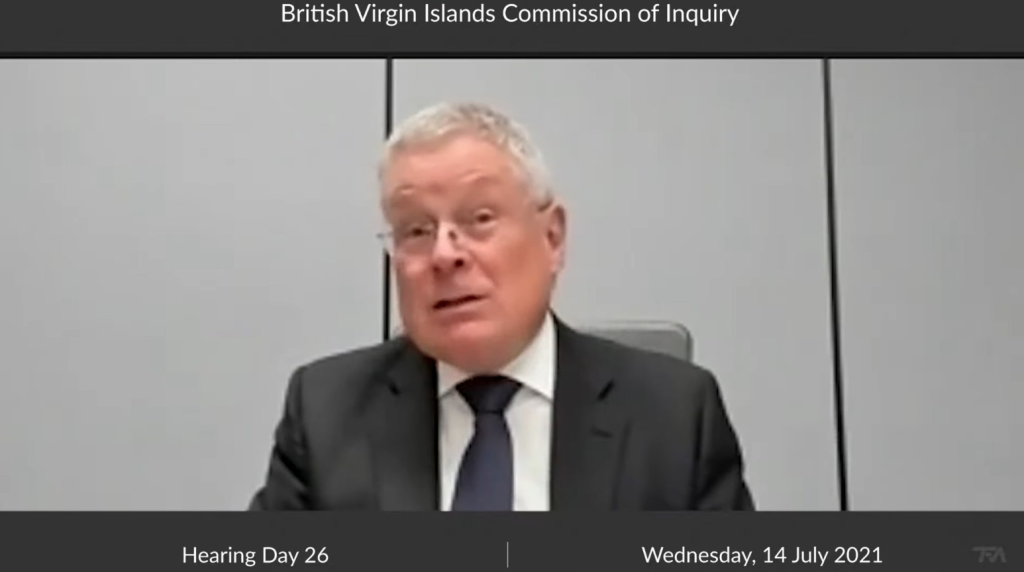 Echoing his findings of other assistance grants that elected leaders awarded to their constituents, Commissioner of Inquiry Sir Gary Hickinbottom concluded that “corruption, abuse of office or other serious dishonesty” may have occurred in the awarding of Covid-19 relief grants that were supposed to go to needy residents. (Screenshot: COI)

As residents struggled to stay afloat during the Covid-19 border shutdowns two years ago, House of Assembly members were each allotted an extra $300,000 to disburse to needy residents as part of the government’s $62.9 million economic stimulus package.

In his 947-page report on governance in the Virgin Islands, Commissioner of Inquiry Sir Gary Hickinbottom found that the programme was executed so poorly and in such obscurity that funds were essentially distributed at the sole discretion of individual HOA members, resulting in grant money being used to settle pre-pandemic obligations and being paid to some public officers whose salaries had not been affected by the pandemic.

Many of the grants were awarded to applicants who provided no supporting documentation, and government auditors received such limited information that they were unable to complete their planned monthly audits of the programme, Sir Gary added.

He added that the Covid grants “were distributed in a legally arbitrary and unlawful manner, on the basis of unsupported applications and without any proper record being kept of the grounds upon which applications were made or granted.”

To receive a grant from the Covid programme, applicants were supposed to submit a form that asked if they had been “unemployed or underemployed as a result of the impact of Covid-19 on [their] place of work,” and to identify their place of employment, their salary before March 30, 2020, and their current salary, Sir Gary wrote.

He added that applicants were also supposed to provide documentation of their financial hardships, and to confirm whether they received any governmental assistance in the past year.

The programme guidelines, he noted, specified that the assistance was to be limited to residents “experiencing genuine and documented hardship brought on as a direct result of Covid-19 and/or hurricane recovery/preparation for which support had not been received under any of the other government stimulus initiatives,” according to the COI report.

However, many of these guidelines were not followed, according to a “scathing” report completed by the InternalAudit Department in May2021, Sir Gary wrote.The auditors, for instance, found that many applicants requested assistance without indicating how the funds would be used, the commissioner noted. “Grant awards appear to be arbitrarily determined,” the COI report adds, going on to note “a lack of consistency in the manner in which payments [were] made when the request [involved] monies owed to third parties by applicants.”

There were multiple instances in which money was paid to an applicant instead of to the relevant third party — a violation of the programme guidelines, Sir Gary explained.

Because most applications omitted required financial information or were otherwise incomplete, the auditors found it impossible to determine the actual financial impact that the pandemic had on the applicants, according to the COI report.

Ultimately, auditors concluded, “It is our opinion that this programme was not structured in a manner that promoted transparency in the decision making, nor equity in the distribution of funds. The programme was shrouded in ambiguity, which made it difficult to administer, which resulted in the broadest spectrum of assistance being offered.”

Sir Gary also explained that support was capped at $5,000 per applicant, but exceptions for higher grants could be made with the approval of the finance minister, who at the time was then-Premier Andrew Fahie.

Sir Gary explained that HOA members would make a recommendation for an award that would then go to the HOA clerk.

The clerk could approve it or refer it to the financial secretary, who would advise the finance minister, who would then decide the way forward, Sir Gary wrote.

However, the IAD found that the clerk was left to sift through the often incomplete applications with marginal assistance amid the ongoing stressors of the pandemic, Sir Gary wrote.

“If the clerk was overwhelmed by the pressures of the developing pandemic — which, of course, I understand, and with which I sympathise — then that would have been a good reason for a process which involved more, not less, rigour,” the commissioner added.

Sir Gary noted that the Covid grants were “essentially an extraordinary one-off extension” of the longstanding HOA assistance grants programme (see page four), but he nevertheless recommended a separate audit into the Covid grants to identify any further steps that “would be appropriate.”

Separately, he also recommended that authorities consider conducting a criminal investigation into the Premier’s Office “in obstructing the [IAD director] in respect of her audit of the Covid-19 assistance programmes.”

Sir Gary also recommended that Mr. Rankin consider an independent investigation into the Premier’s Office “in obstructing the auditor general in respect of her audit” of the Covid assistance.

He further recommended that officials consider amending the 2003 Audit Act to make it a criminal offence for any person to impede or otherwise not cooperate with the auditor general unless they have a “legitimate excuse.”