In 1975, while sailing north through the Caribbean, stormy weather caused me to take shelter in the Virgin Islands. The anchorage off Road Town was exposed and uncomfortable, and I …

END_OF_DOCUMENT_TOKEN_TO_BE_REPLACED 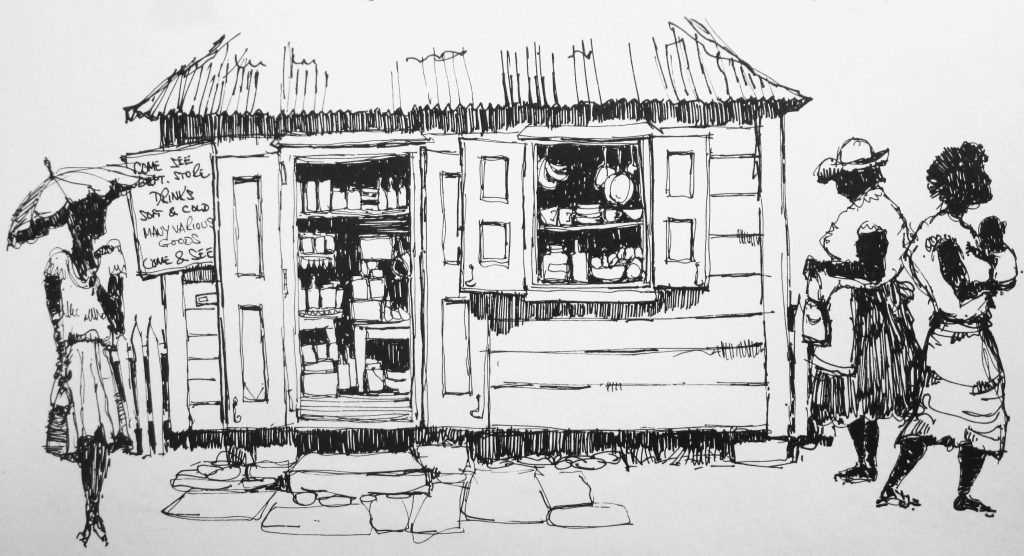 In 1975, while sailing north through the Caribbean, stormy weather caused me to take shelter in the Virgin Islands. The anchorage off Road Town was exposed and uncomfortable, and I was told of a sheltered cove a few miles along the coast. Its entrance was narrow, but the surrounding reef offered perfect protection. My intention was to continue on my way as soon as the weather improved.

The weather did improve, but I stayed on, and that idyllic cove became my home port for the next 20 years.

In the VI, much is made about belonger status. However, Somerset Maugham’s novel The Moon and Sixpence speaks about a deeper sense of belonging: “Sometimes a man hits upon a place to which he mysteriously feels that he belongs. Here is the home he sought, and he will settle amid scenes he has never seen before, among men he has never known, as though they were familiar to him from his birth.”

I collected the material for my book Virgin Island Sketches during the early years of my stay. It celebrates the way of life of the islanders, and my sketches now serve as a reminder of those halcyon times past.

While I was busy preserving scenes from the past, VI poet Sheila Hyndman (1958-1991) was prophesying the future:

They will come with tools and machines.

They will bring to light your secret places,

They will demand your mysteries.

They will destroy, build up.

They will dilute your treasures,

And rob you of your chastity.

Till all that’s left of your true self

Will be an old and forgotten poem

I shared Sheila’s love of her homeland, and in the years that followed I contributed my own work to that end.

But as the 1980s progressed, I found it increasingly difficult to relate the past to the future. The maxim “Yes, We’re Different” was being cast aside in favour of being the same as everywhere else. I began to realise that much of the development taking place was for the benefit of foreign entities. It had begun with the Wickhams Cay reclamation project in the 1960s, and it has continued more recently with financial services and mass tourism. Although the islands are undoubtedly financially better off than when I first knew them, in the process of acquiring that transient wealth, Virgin Islanders have lost more than they gained.

My disillusionment of what was perceived as progress became all the more acute in the year that I travelled the region in search of material for my book Caribbean Sketches. As with my earlier book, I was working against the clock in attempting to capture each island before it degenerated into being the same as everywhere else. Cruise ship passengers step ashore to the same spurious scene as at every other port of call. We tend to forget that the individuality of places reflects the individuality of ourselves.

As my journey through the region progressed, I found that the fundamental problem faced by Caribbean small island states was not one of self-governance, but one of self-sufficiency. Even on islands that have claimed independence and that are rich in natural resources, the islanders themselves have not benefitted.

Rather than farming the land, the present generation prefers to sit at a desk or serve tourists. To finance an alien lifestyle, their governments sell passports to foreigners and become deeply beholden to the People’s Republic of China. In real terms, these islands are less independent now than they were 100 years ago.

Self-sufficiency for small island states relates to lifestyle expectations. Three generations ago, hard work was the order of the day, and the islanders lived within their means. Since then, there has been a hankering for a westernised lifestyle and a reliance on wealth generated by foreign economies.

The fundamental challenge at this point in time is to seriously question the direction that the VI and the region in general has taken. We need to re-evaluate the past in order to determine if what was originally perceived as “development” has in fact been in the best long-term interest of the islanders.

To correct the mistakes of the past and to start all over again verges on the impossible. In more ways than one, the past is set in concrete, and concrete is a difficult material to break down. Nevertheless, a reassessment of values is a necessary first step towards rediscovering a paradise lost.

For otherwise, as Sheila wrote, “All that’s left of your true self will be an old and forgotten poem like mine.”