Community Emergency Response Team trains for hurricane season and beyond

Outside the New Testament Church of God in Baughers Bay last Thursday, a woman lay on the ground beside her crashed car, screaming hysterically. “My baby, my baby!” she cried. …

END_OF_DOCUMENT_TOKEN_TO_BE_REPLACED 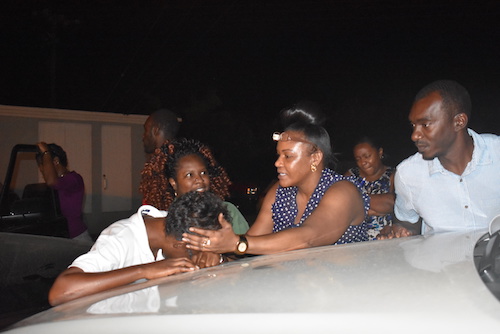 Volunteers help a woman playing the role of a car accident victim at a July training for the Road Town CERT team. (Photo: CLAIRE SHEFCHIK)

Outside the New Testament Church of God in Baughers Bay last Thursday, a woman lay on the ground beside her crashed car, screaming hysterically.

About a dozen volunteers from the Road Town Community Emergency Response Team rushed to her side. Two of them shook her and asked if she was okay. She said she was.

“But please save my baby!” she screamed.

Confused, the volunteers assembled in front of him.

“Did you assess the situation?” he asked them.

They slowly turned around. It seemed that, in focusing all their attention on the screaming woman and baby (neither of whom were injured in the simulation), they’d missed a man with a head injury lying a few yards away.

Worse, a woman crushed between two cars was about to quietly pass out from shock.

“Never rush into a scene,” he said. “You need to send one or two people out first. There could have been a gas leak or a fire. You never know.”

In an emergency, he explained, the person making the most noise is typically the least badly injured. He urged them to try again.

Eventually, the rescuers managed to pry the two cars apart and load the wounded woman onto a stretcher and hustle her off. The other injured man and woman were treated and led away on foot. Later, inside, after a debriefing, Mr. Jeffrey asked the volunteers to rate themselves. They decided on a six out of ten: good, but not great.

“That’s pretty normal for this stage,” Mr. Jeffrey said. “This would have been their first test and it’s fresh in their minds. They’re the best persons to rate themselves, not me. It keeps them in mind that if something else has to happen — or [during] another testing phase — they know what they need to do better.”

The CERT programme, which DDM conducts in partnership with the Fire and Rescue Service, the BVI Red Cross and the BVI Health Services Authority, has its roots in a programme launched in the United States after the 1985 Los Angeles earthquake, and later expanded after 9/11 with a focus on preparing local communities for disasters.

Since it began in the VI in 2012, CERT teams have been established in North Sound and The Valley, Virgin Gorda; on Jost Van Dyke; on Anegada; and in West End, Purcell, East End, Carrot Bay, Road Town, Sea Cows Bay, Cane Garden Bay, and Brewers Bay on Tortola.

But in recent months, according to Mr. Jeffrey, the initiative has taken on an increased urgency.

“Seeing the passing of Irma and Maria last year, … a lot more persons have shown interest in it,” he said. “So we decided to go ahead and roll out a full campaign for the month of July up until August.”

He has been an instructor with the programme since its beginning, and has also trained the other volunteers who were on hand to help him plan last Thursday’s scenario.

DDM Training Manager Carishma Hicks said that funding for the programme currently comes from Unite BVI through a partnership with the United Kingdom’s Foreign and Commonwealth Office.

In August, according to Ms. Hicks, DDM will team up with the Adventist Development and Relief Agency and UNICEF to bring the programme to teachers, high school students, church groups and the private sector, with a goal of training nearly 400 people across the territory by the end of the year.

Meanwhile, over the course of five evenings, the Road Town team has covered skills including VHF communications, putting out fires, search and rescue, assessing damages and managing emergency shelters.

Members have also become certified in first aid and CPR, including use of an automatic external defibrillator, and learned how to transport injury victims by stretcher.

Next month, they’ll be put to the test when teams from throughout the territory are brought together to practise with a large-scale disaster scenario.

The teams will be given fluorescent vests and hard hats, and in the event of major disasters they will be ready to use VHF radios and satellite phones.

“The radios will be sent out to community centres and shelters so that in a time of need that’s what they will use to communicate back” to the National Emergency Operations Centre, Mr. Jeffrey said, adding, “We give them a little bit of everything. What we basically hope to get out of it is hands-on training for each of them.”

Memories of last year’s disasters weighed heavily on the minds of volunteers as Dr. June Samuel, chief of medical staff at Peebles Hospital, instructed them on the psychology of disasters.

She encouraged volunteers to put themselves in the victims’ shoes, and asked them to name emotions they may have experienced during and after Irma.

“I cried a lot,” one woman recalled. “But for others, not for myself.”

Later, she showed volunteers a long list of things not to say to a disaster victim, beginning with “It’s God’s will.”

One woman questioned why.

“Remember, we are talking about the immediate aftermath of a disaster,” explained Dr. Samuel. “At some point they may come to that conclusion on their own. But it’s not for you to tell them.”

The volunteers asked what they should say instead.

She also gave each team member a homework assignment.

“Recognise your stress response and how you manage it,” she requested. “As a responder, it is possible to over-respond. You have to check on yourself first before you try to help others who are around you. Remember how you are feeling if you have suffered loss and whether you need to get help for yourself.”

Having experienced downed communication lines after Irma, returning volunteer Kadia Turnbull and first-timer Francine Noel said that learning to use VHF radios is a vital skill.

“Organisations and schools should have these radios at hand. If there is a disaster at the workplace, the team should get coverage … and assist each other,” said Ms. Noel, a teacher, adding that the training will help her respond on the job. “Because of the last two hurricanes, it made me aware that a lot of people need help and they could have done much better if I had that knowledge. So now…I will be more versed in helping schoolchildren or anyone.”

Ms. Turnbull said the skills are also relevant to her job working with the Wickhams Cay Development Authority and the Office of the City Manager.

“To have this kind of training will let us be more helpful in case a disaster happens, and help us maintain and get the city under control better,” she said.

She urged others to sign up for training “for the sake of their families or their neighbours.”

Added Mr. Jeffrey, “If we ever have to go through something like Irma again and we are cut off for a period of time, once we know they’re okay, they’ll know how to go out and assist their communities.”