When the Seventh-day Adventist Church in East End opened to distribute Covid-19 vaccines on Feb. 17, Lutia Durante was third in line, daughter and grandson in tow. By Tuesday, when …

END_OF_DOCUMENT_TOKEN_TO_BE_REPLACED 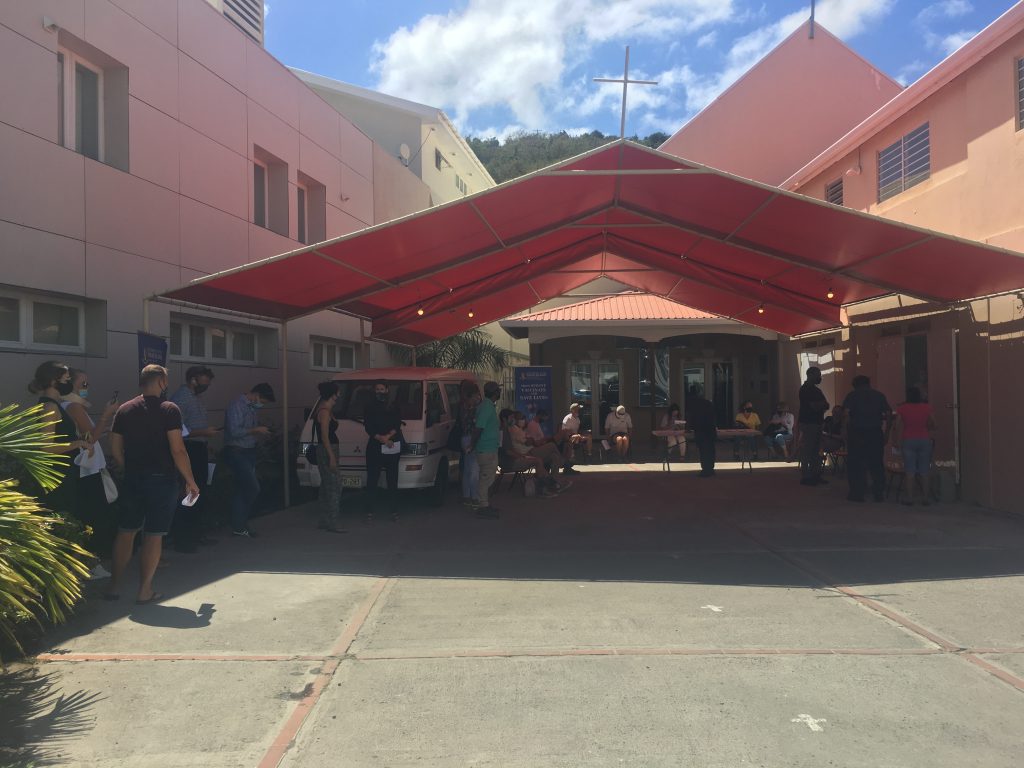 When the Seventh-day Adventist Church in East End opened to distribute Covid-19 vaccines on Feb. 17, Lutia Durante was third in line, daughter and grandson in tow.

By Tuesday, when he hadn’t experienced any side effects, he was telling everyone he knew to go, too.

Even though he is a senior citizen, he explained that he wasn’t worried about any possible serious side effects from the AstraZeneca vaccine, which has been deemed safe for all adults, and which health care workers began rolling out to the public last week.

“People are supposed to be really worried about it, but people talk all the time,” he said. “I’m over 60, I smoke a lot and I drink and I’m the one at risk. My wife is a nurse and I know I need to take care of my grandkids more than myself. I don’t want to bring it to them, [but if I get the virus] at least it will kill me and not them.”

His family members also have had the vaccine. “Everybody’s feeling good,” he said. “We’re going back in March to get the second one. I tell people everyone wants to wear a mask, but they don’t want to get the shot. The mask and the shot go together.”

Mr. Durante recognises that getting the VI vaccinated will allow the borders to open further and make it easier for people to travel, even if it’s only as far as St. Thomas. “I say, hey, let’s live,” he said.

If acting Chief Medical Officer Dr. Ronald Georges has his way, Mr. Durante will soon be joined by thousands more happy recipients of the vaccine, 8,000 doses of which arrived in the territory three  weeks ago. The Ministry of Health and Social Development announced that 2,050 of those had been administered as of Feb. 24.

Health care workers have been vaccinating 500 patients a day this week, Dr. Georges said in an online discussion hosted by the BVI Tourist Board.

“And as there are more vaccines, we’re expecting to be able to do more,” he he added. “And I think really once we get the private sector on board, the ones I’ve spoken to, they have been willing to open up their practices for morning sessions.”

With 12,000 more doses on the way in early March and others set to arrive after that, he said government is planning to continue the vaccinations for six months.

The timing is important, because as Dr. Georges explained earlier this month, getting around 70 percent of the population vaccinated will be key to loosening arrival protocols, opening up borders, and boosting the lagging tourism economy.

In the VI, the number of known active cases dropped to zero as of Tuesday.

“What we’re seeing right now is a lot of [VI visitors] who are testing positive with very weak types of positive results,” Dr. Georges said. “And when we delve into their history, they have had coronavirus a month to three months before.”

At the same time, other countries are also rolling out their vaccination programmes.

“So as the numbers of persons getting vaccinated goes up and the number of cases comes down, we see fewer and fewer new strains coming out,” the doctor explained. “The whole mix is going to change as more people get vaccinated and more research comes out.”

When Mr. Durante and his family arrived at the clinic on Feb. 17, he and his family were third in line. However, by the time he turned around and looked outside, there were dozens of people gathered, he said. By the end of the day, social media was flooded with people showing off stickers on social media proclaiming, “I got my Covid19 vaccine” with “#BVILove.”

But some ended up going away disappointed, including those in the previously announced first or second priority groups, which consist of frontline workers and people who are over 60 or high-risk.

One of those was 67-yea rold Donna Arter, who posted on Facebook her frustration about having to wait for nearly three hours at the site in East End.

“This senior waited four hours, sun and rain, name skipped over and called around 3:30 to go in, only to be told no more for the day,” she stated.

Dr. Georges called the crowd that gathered in East End on Feb. 17 a “vaccine flash mob.”

“Nurses in East End advised somebody that it was okay for them to have somebody else come,” he said. “And people were asking about, ‘Can I come and get vaccinated?’ And they basically said yes. And that went viral. An awful lot of people came.”

By Tuesday, though, Ms. Arter was in a better mood, having received her jab finally.

“I actually got two calls: one from the list of people who didn’t get in last week at the pop-up and a second from what I believe to be from the online registration,” she wrote on Facebook.

She added that she was experiencing tenderness in her arm and some flu-like symptoms, which are normal side effects from the vaccine. However, she didn’t mind.

“I have an April 6 appointment for the second shot,” she wrote.

As Dr. Georges explained, the “flash mob” situation is not uncommon.

“It’s not about vaccines being wasted,” he said. “But if we do open a vial of 10, and we have 10 people scheduled and they don’t come, that’s basically what the nurses are going to do: They’re going to call people. So we have to manage that a little better, I think, moving forward.”

In response to the crowding on Feb. 17, Health and Social Development Minister Carvin Malone announced that the online registration portal http://ministryofhealth.gov.vg/vaccines/vaccine-registration/ went offline. However, it returned yesterday, and he encouraged those not yet vaccinated to
register there.

Premier Andrew Fahie also received the jab with his family yesterday the Nurse Theresa Smith Blyden Clinic in Cappoons Bay, after having declined it earlier this month.

Meanwhile, people of all priority groups have been steadily able to receive the jabs, starting with frontline workers at the Road Town Police Station last week. By Monday, Feb. 22, walk-ins were being accepted at the East End location, at St. William’s Catholic Church in Road Town, and at the former Irene’s Restaurant in the R&R Malone Complex in Pockwood Pond, as well as sites on the sister islands.

However, government officials said they were working toward avoiding another “flash mob,” with high-priority patients turned away. Mr. Malone noted, “Special efforts shall be made by the registration committee to contact our senior gems and our most vulnerable.”