Last Tuesday morning in Cane Garden Bay, something was happening everywhere you looked: Backhoes were churning up sand, steps were being swept, roofs were being hammered, buildings were being painted, …

END_OF_DOCUMENT_TOKEN_TO_BE_REPLACED 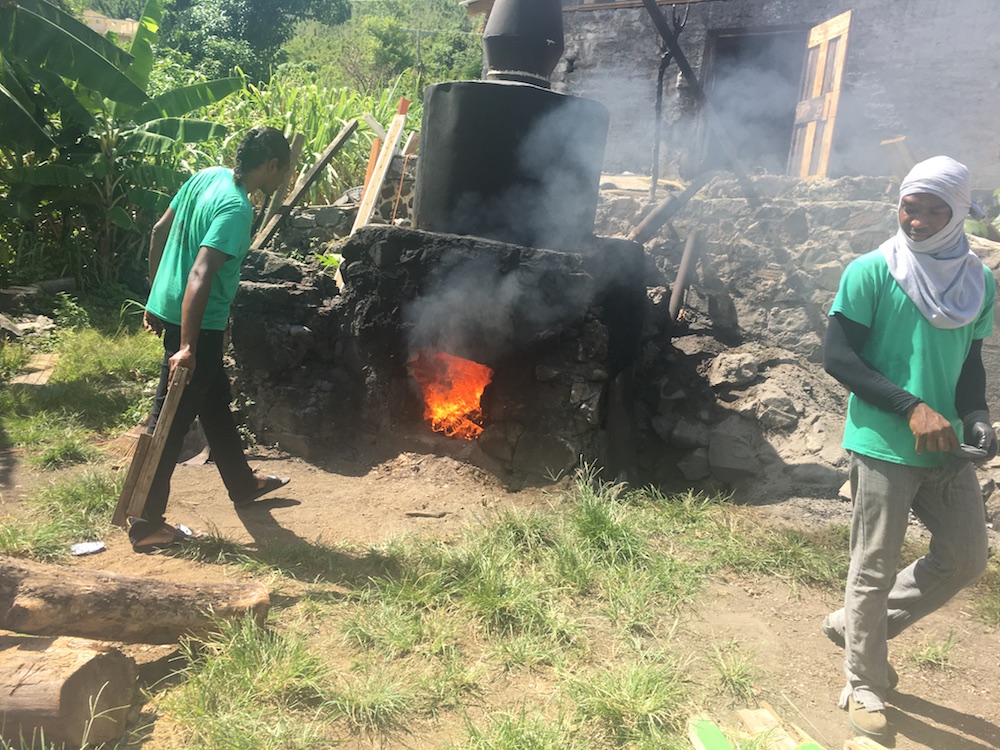 Matthew Callwood feeds the fire at the Callwood Rum Distillery as he prepares for the ar- rival of cruise ships, which bring passengers who make up about half of the business’s cus- tomer base. (Photo: CLAIRE SHEFCHIK)

Last Tuesday morning in Cane Garden Bay, something was happening everywhere you looked: Backhoes were churning up sand, steps were being swept, roofs were being hammered, buildings were being painted, and simpler structures were going up from scratch.

The area was getting ready for its first official encounter with Disney cruise ship passengers since before Hurricane Irma.

Ms. Rhymer said progress has been slow, with banks and insurers often holding up the restoration process.

“But everybody’s bringing it back,” she added. “It’s going to be even better.”

For CGB, the big day is today, when Disney Cruise Line will return to the Virgin Islands for the first time in nearly a year. After Hurricane Irma devastated the territory’s infrastructure in September 2017, Disney rerouted ships away from the VI and toward Phillipsburg, St. Maarten. It’s been a hard-fought battle to get them back.

In May, representatives from Disney, Norwegian Cruise Line, and the Florida Caribbean Cruise Association toured the territory and visited with government officials. At the time, Russell Daya, Disney’s executive director of marine and port operations, port development and itinerary planning, said that, as a family-oriented cruise line, safety and “the total guest experience” remained concerns, and that the line was especially looking at issues like exposed building materials and debris in the water, which some tourists had reported in January.

Ms. Rhymer is excited about the cruise ships’ arrival.

“When the ships are in, we have good days for sure,” she said. However, she is also looking at longer-term plans. The restaurant will soon have a new roof after closing for two weeks during construction with plans to reopen in mid-September. The hotel portion of the business, meanwhile, is set to reopen at the end of November, and Ms. Rhymer said she already has strong bookings.

“I think we’re going to have a good season,”she added. “A lot of people who didn’t make it last year will come this year.”

Meanwhile, at Paradise Club, which was rebuilt almost entirely from scratch after the hurricane, there was also plenty of activity as a backhoe worked to help repair one of the business’s water tanks.

But owner Ron Cline said cruise ship passengers aren’t a big part of his business at the moment.

“They usually stay down by the other end of the beach,” he said.

He was concentrating on planning a memorial celebration for Hurricane Irma the weekend of Sept. 6, at which he plans to put up a remembrance wall where people can hang signed pieces of metal and wood and light lanterns to commemorate people lost in the disaster.

“After we’ve been through that kind of trauma, we need to remember,” he said.

Eventually, though, he also plans to expand to attract more of the cruise crowd, enlarging the existing bar and putting in a cabana that he hopes will be in place by October.

And at the other end of the village, Matthew Callwood, manager at Callwood Rum Distillery, knew what type of tourist he hopes will start paying the is- land a visit.

“Americans,” he said. “They like to have fun and get drunk. They’re a party type of people.”

He was hard at work Tuesday feeding wood into the fiery brick oven that filled the yard of the 400-year-old distillery with sweet-smelling smoke. Although the business got up and running within months of the storm, it also faced difficulties with repairs, particularly in importing all the needed materials. “Not much help from the government,” he said.

Mr. Callwood added that he thinks the area is ready for tourists, and he praised the clean beaches and the volunteers who have helped CGB to recover.

“The only one thing I would say is they need to fix the roads proper,” he said.

Long the territory’s most popular beach among tourists and residents alike, CGB has undergone quite an odyssey to reach this point. When the 4,000-passenger-capacity Disney Fantasy docks on Tuesday, it will be the first time such a large cruise ship has visited since before the hurricane.

After CGB was slammed by storm surge, heavy runoff and a nonfunctioning sewage treatment plant led to high counts of coliform bacteria, causing the closure of the beach. Consequently, from December until now, all but a handful of cruise passengers were routed away from CGB and toward Long Bay Beach on Beef Island, sparking a debate about whether tourists should have been allowed in at all.

But on Tuesday, that controversy seemed to be in the past as a team from Wet Rollers unloaded a truckload of paint to begin putting the finishing touches on three newly constructed BVI Tourist Board booths near the beach. The structures were part of the $1.7 million worth of improvements to the village that the government announced in May.

Recent projects have included repairs to the wall of the CGB burial ground and dinghy dock; new reef markers; new vendor stalls; repairs to beach restrooms; and new safety and parking signs. On top of that, the newly formed CGB Development and Restoration Group teamed up with the volunteer organisation All Hands and Hearts to clean and repaint abandoned houses, and coconut palms from the BVI Tourist Board’s Seeds of Love programme
were planted along the beach.

In the near future, there are more changes to come for CGB. A $1.6 million sewerage project announced in January is scheduled to be completed next year, and $834,000 has been earmarked toward repairing the road.

Pier Park prep
Tourism-dependent businesses have begun preparing in earnest elsewhere in the territory as well.

Taxi and Livery Commission Director Dameon Percival encouraged taxi operators to start making preparations for the ships’ return, advising them to “make sure their vehicle is in top working condition and they have all of their paperwork up to date and on hand.”

Preparations, he added, should include ensuring that their licence is up-to-date and that their public address systems are working in preparation for possible inspections on Tuesday.

The Tortola Pier Park, which took less damage from Irma than other areas in the territory, has been ready for months. The park “formally opened”inMay, but was already at 80 percent of its capacity by then, according to Chief Executive Officer Vance Lewis, who said there are over 50 retail establishments in the park currently open and eager for customers.

Meanwhile, he has been keeping busy planning “interactive experiences” for the guests, he said, adding that on Tuesday, this will include welcome drinks and a mini-parade, with activities ranging from rum tasting to moko jumbie performances.

“We want to get a good cultural exchange going,” Mr. Lewis said.

As cruise ships continue to arrive, he added, passengers will take tours to Long Bay Beach as well as CGB, and excursions to Virgin Gorda and possibly Jost van Dyke.

It will be the first time in about four months that a cruise ship will have docked at the pier. On Dec. 6, the 1,830-passenger-capacity Marella Discovery was the first ship to return to the territory post- Irma, and other smaller ships have also paid visits since then.

Still, the tourism industry seemed to be holding its breath until major cruise lines made the decision to return. During a May visit, a representative for Norwegian said the line will likely stay away until October, but that it is regularly receiving government updates about the territory’s progress.

Slow progress
With the long-awaited boost to business pending, some wonder whether the big day should have come earlier.

Alex Dick-Read, who owns and operates the Pier Park-based tour company GroundSea Adventures, is looking forward to the return of the cruise ships, whose passengers make up about half his customer base — but wonders whether more could have been done to bring them back sooner.

“Disney and Norwegian have very, very clear-cut requirements,” he said.

“Where’s the toilet? Where’s the running water? Simple things. You can look at a list and say, ‘All right: They need that.’ If our government had been fo- cused on getting money going into the economy, they could have hit that list [as a] high priority.”

Some in government agree with him. Communications and Works Minister Mark Vanterpool admitted in May that the VI lagged behind other Caribbean nations in repairing tourism infrastructure.

“Compared to other destinations damaged by hurricanes Irma and Maria, the territory has been slow to sufficiently prepare to receive the larger cruise ships,” he said.

Mr. Dick-Read said his company, which focuses on land and sea tours around Beef Island, lost some equipment in the storm, including kayaks and life jackets, which he’s working on replacing.

“But my biggest loss are the walking trails,” he said. “You can’t find them: The trees and vines are blown over and grown up.”

He has recut some of them himself, he added.

Still, despite the changes, he isn’t worried. He regularly asks for feedback from tourists who have visited since the storm, and few, if any, had anything negative to report.
“There’s an expectation of damage and destruction. They see it and they factor that in,” he said. “Then they all see the beauty of the islands as they were. … They find it quite interesting. Most people are just looking for a good time.”