Following allegations from abroad that United States fisherman Michael Foy has been unfairly treated while in custody on Tortola, Director of Public Prosecutions Tiffany Scatliffe-Esprit issued a circular on Friday …

END_OF_DOCUMENT_TOKEN_TO_BE_REPLACED 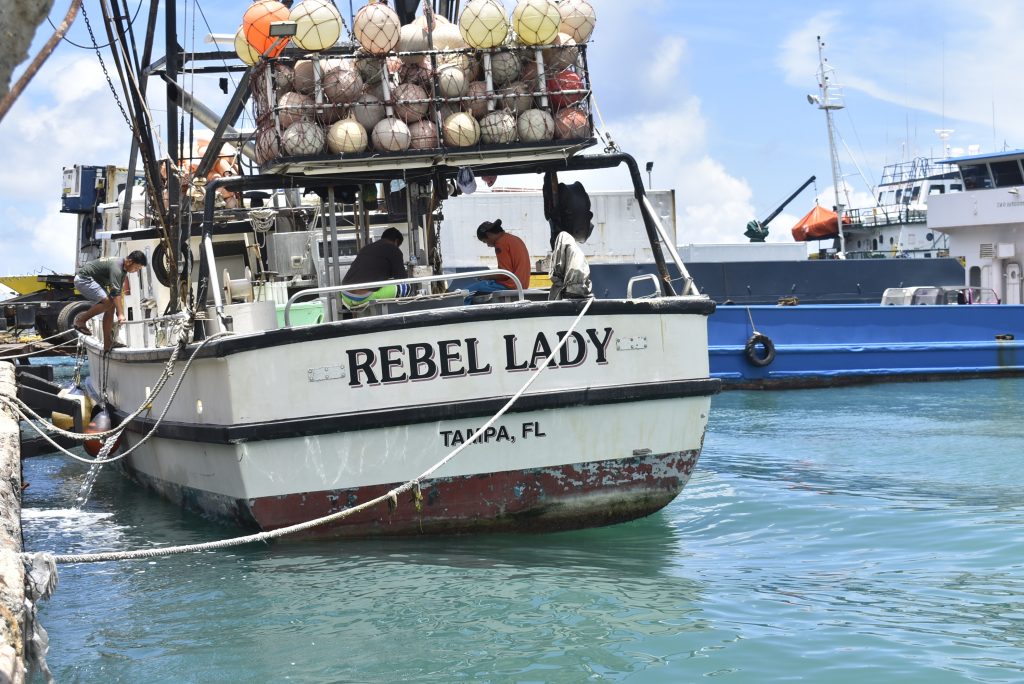 While Michael Foy is detained in Her Majesty’s Prison, his Indonesian crew members are stuck aboard the Rebel Lady in Port Purcell, where they have endured harsh conditions despite and food and supply deliveries from abroad, according to Mr. Foy’s sister. (Photo: JOEY WALDINGER)

Following allegations from abroad that United States fisherman Michael Foy has been unfairly treated while in custody on Tortola, Director of Public Prosecutions Tiffany Scatliffe-Esprit issued a circular on Friday explaining the charges against him.

Mr. Foy’s family members, including his sister Kimberly Kelly Foy, have claimed that he has received harsh treatment after he was arrested in early June. Ms. Foy said an official at the US Embassy in Barbados told her that her brother claimed he had gone days before being given toothpaste, soap or clean clothes.

Ms. Foy has also expressed concern that her brother’s four Indonesian crewmembers — who she alleges have been confined to his ship in Port Purcell — are facing what she describes as a “humanitarian crisis,” with limited communication to the outside world, a generator that blew out, and a septic system that overflowed.

Disturbed by her brother’s arrest and by the mistreatment he allegedly experienced at the hands of Virgin Islands officials, Ms. Foy, a New Jersey resident, solicited the help of her state representatives, she said, adding that her brother’s main residence is in New Jersey but he fishes out of Puerto Rico.

On June 30, two US senators and one US congressman, all from New Jersey, sent a letter to Deputy Governor David Archer Jr. saying that they are monitoring their constituent’s case and expect him to be treated and adjudicated fairly.

The Miami Herald, which has a daily print circulation of about 75,000, subsequently published a July 9 article about Mr. Foy’s story, which has been reprinted by other news sites like Bakersfield.com, which serves the California desert town of the same name.

When the Beaconcalled the DPP’s office on July 7 to request information about Mr. Foy’s court hearing and charges, this reporter was informed that the DPP will not respond to calls from the media.

Ms. Scatliffe-Esprit, who was confirmed as DPP in May, also did not respond to questions emailed that day regarding the allegations against Mr. Foy.

Upon being apprehended by police officers near Norman and Peter islands on June 8, Mr. Foy admitted to being the captain of the ship and claimed that he had received permission to enter the territory, according to the circular.

Investigations by police, however, found that acting Chief Immigration Officer Ian Penn had denied Mr. Foy’s request for entry, as the VI’s borders were closed to gird against Covid-19, Ms. Scatliffe-Esprit stated.

After Mr. Foy’s arrest, police detained his vessel, the Rebel Lady, and the court arranged for his 7,000 pounds of fish “to be forfeited and resold to benefit the government,” the DPP wrote.

Though she did not address the crewmembers’ alleged confinement, she said that they do not speak English and they are all holders of transit visas “only applicable to persons working on a fishing vessel.”

Ms. Foy said this week that she had heard from her brother that the crew is still stuck aboard the ship, though they have received two food deliveries from Puerto Rico, where Mr. Foy’s fishing operation is based, as well as shipments of supplies that had been intended for cruise liners.

Ms. Foy hasn’t spoken directly to the crewmembers — who she said are like family to her brother — and said that news about their condition comes randomly from different sources. “There isn’t any direct contact, so it’s kind of who said what,” Ms. Foy explained in a Friday email.

According to Ms. Scatliffe-Esprit, Mr. Foy initially was denied bail because he has no connection to the VI and no legal status here, but in a Monday email Ms. Foy said a bail-related appeal hearing has been set for next Wednesday.

Ms. Scatliffe-Esprit did not respond to additional questions about Mr. Foy’s bail appeal, and Mr. Penn and acting Customs Commissioner Leslie Lettsome both have declined to comment, citing the ongoing investigation.

In her circular, the DPP added, “We believe that all accused, victims and witnesses have a right to a fair trial and act in the interest of justice. Therefore, we will not issue any further comments on this matter.”