“It’s not about how you start, but how you finish,” Raul Sprauve told the 148 graduates of Elmore Stoutt High School during their commencement ceremony last Thursday at the Multi-purpose …

END_OF_DOCUMENT_TOKEN_TO_BE_REPLACED 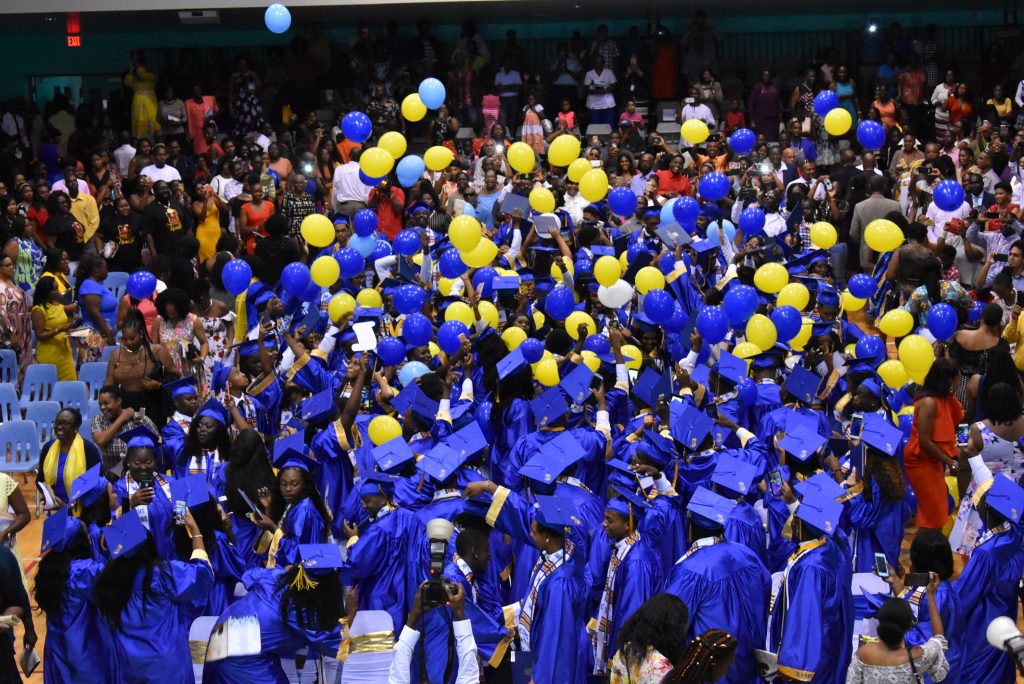 Graduates from the Elmore Stoutt High School celebrate their accomplishments amongst friends and family, with a ceremony culminating in a shower of balloons flaunting the school’s colours. (Photo: ZARRIN TASNIM AHMED)

“It’s not about how you start, but how you finish,” Raul Sprauve told the 148 graduates of Elmore Stoutt High School during their commencement ceremony last Thursday at the Multi-purpose Sports Complex. The group apparently felt that they had finished strong if their cheers were any indication during the keynote address delivered by Mr. Sprauve, an entrepreneur and musician from the Class of 1999.

From ESHS to Virgin Gorda’s Bregado Flax Educational Centre, the past eight days were filled with such celebrations as two public schools and three private schools celebrated a total of 218 graduates.

Of the 148 from ESHS, 78 finshed with honours, five with high honours. Fifteen were dual enrollment students taking classes at the H. Lavity Stoutt Community College, and 22 were CAPE students. The class was led by Valedictorian Kaylian Penn and salutatorian Shaquille Christopher.

Ms. Vanterpool, who moved here from the Dominican Republic about five years ago, said it was difficult to come to a country where most people speak a different language.

Then came Hurricane Irma, which destroyed their school.

“Now that we’re in the CTL building, we didn’t have many options to get food,” she said. “The building was narrow and there wasn’t much space to move. There was also a lot of mould in the building.”

Nevertheless, Ms. Vanterpool explored her talents in theatre, acting and singing, and she plans to continue her education at HLSCC and pursue performing arts.

Shane Williams, who graduated with honours and is already taking accounting classes at HLSCC, agreed that Irma slowed down the school a little bit, but he was proud that it didn’t stop the class from graduating.

“I congratulate all my fellow classmates on our success,” he added.

The Bregado Flax Educational Centre’s Secondary Division held its ceremony on Friday at the Catholic Community Centre in Virgin Gorda under the theme “The future belongs to those who believe in the beauty of their dreams.”

Eighteen graduates were led by valedictorian Nadisha Baptiste and salutatorian Lenique Simeon, who shared memories and gave advice as members of the House of Assembly and other dignitaries looked on.

Principal Hilroy George highlighted the struggles and successes of the school under difficult circumstances in the wake of Irma, and HLSCC President Judith Vanterpool delivered the keynote address, listing steps that she said would lead to success.

Annique Harrigan walked away with this year’s Top Student in Tourism Award and received $2,500 for her accomplishments from the BVI Tourist Board. The RTW Humanitarian Award was presented to Denzil Hutchinson and T’Shankua Stevens, who both received $500 for serving their community.

On June 26, a group of ten close-knit students graduated from St. George’s. The valedictorian was Isabelle Percival, and two students tied for the title of salutatorian: Michael Chen and Hunter Christopher.

In Principal Dana Lewis Ambrose’s address during the ceremony, she focused on the class’s close relationships.

“Now for me, these 10 students were 10 different individuals who brought something to the table,” she said.

“One of our teachers, for example, made a statement one day: ‘Let’s create a sixth form for these students just so we could keep them.’ It was a class that any teacher would want. They were mannerly, kind, challenging but respectful,” she said.

The 13 Cedar graduates were awarded their diplomas last Thursday during a ceremony at the New Testament Church of God International Worship Centre in Baughers Bay.

Director Scott Crawford praised the class’s resilience in completing their International Baccalaureate Diplomas despite setbacks from the hurricane.

“They entered Grade 11 and started the IB diploma programme just a few days before Hurricane Irma struck,” he said. “They willingly extended their school day every single day for a year and a half, gave up elective courses, gave up travel week, and focused 100 percent on finishing on time.”

Collectively, the class has already received offers from more than 30 universities in the United Kingdom, United States and Canada, as well as scholarship offers totaling more than $500,000 over four years, he said.

Dr. Wheatley spoke on the importance of the graduates’ ability to adapt and survive in an ever-changing world.

“You now stand on the threshold of an uncertain future, but you are moving into a world which is now characterised by existential change,” he said.

Nina Forte was chosen by her class to speak on its behalf. She said that all the students had the same goal in mind: to complete their IB diplomas. She also included all of her classmates in her speech and shared special memories about each one.

Twenty-nine graduates of the BVI Seventh-day Adventist School’s Class of 2019 received their diplomas on Sunday at their campus in Sea Cows Bay. Principal Wade Tobin urged the class to “commit their lives to God and therefore manifest a maturing faith.” Then he gave them some advice on achieving that goal.

“This includes careful use of time and discrimination of music, social media and entertainment,” he said. “I expect that you will be flexible, adaptable and resilient even in adversity.”

It was the 12th commencement exercise for the school, which now has 223 alumni. Premier Andrew Fahie also spoke at the ceremony.

“Forgive me for not giving you a traditional and conventional premier’s remarks, because my style has never been one to conform to such,” he said.

He then shared what he called the Optimist Creed. “What happens to us externally is merely the manifestation of what we decided,” he added. “Never trust your eyesight. Always trust your insight.”