As it was lifted out of the translucent terrarium, the three-foot-long Virgin Islands boa eyed the 23 members of Judith Martin’s grade six class with caution. The Althea Scatliffe Primary …

END_OF_DOCUMENT_TOKEN_TO_BE_REPLACED 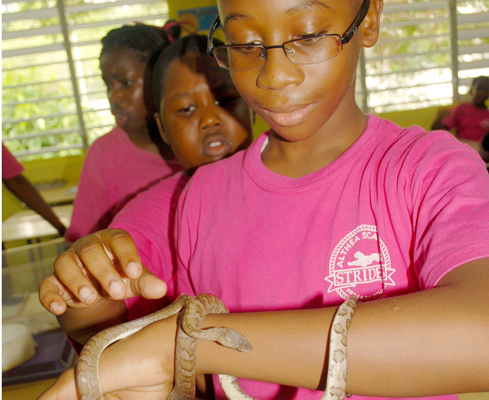 Mikkel Bassue, an Althea Scatliffe Primary School student, holds a Virgin Islands boa during a class presentation in September. The rare snakes face threats from residents who mistakenly believe them to be dangerous. Photo: JASON SMITH

As it was lifted out of the translucent terrarium, the three-foot-long Virgin Islands boa eyed the 23 members of Judith Martin’s grade six class with caution. The Althea Scatliffe Primary School students, most of whom are 11 years old, crowded around Freeman Rogers as he held up the snake, with most students wanting to hold it or touch its skin. This reporter — who along with Mr. Rogers, the Beacon’s editor, went to the classroom to show the students the boa — asked them if they were afraid of snakes.

A few students in the back answered differently, with one boy adding thoughtfully, “only the poisonous ones.”

After this reporter sought out student volunteers to hold the snake, Mikkel Bassue raised his hand. He stood calmly as the female boa, which the students later voted should be named Sharlon, slowly curled its way around his arm.

Not all VI residents are as open minded about the VI boa — which is one of four species of snakes native to the territory, all of which are non-poisonous. In August, a VI news website published a photograph of a Carrot Bay resident holding up a dead VI boa on a machete.

Clive Petrovic, a biologist who has studied the creature since 1990, said that killing the snake was unnecessary, adding that the animals are non-poisonous, docile and harmless.

“What I say to people is, ‘I don’t expect you to fall in love with boas or want to cuddle them or anything like that, but I do want you to understand that when you do see a boa, it is simply a wild creature, and if it’s in your house you simply sweep it out rather than chop it into pieces,’” he said.