After Hurricane Irma, Virgin Gorda author Jacky Silvers noticed something missing from the community’s narrative about the storm. “I realised that the adults wanted to tell their stories, but the …

END_OF_DOCUMENT_TOKEN_TO_BE_REPLACED 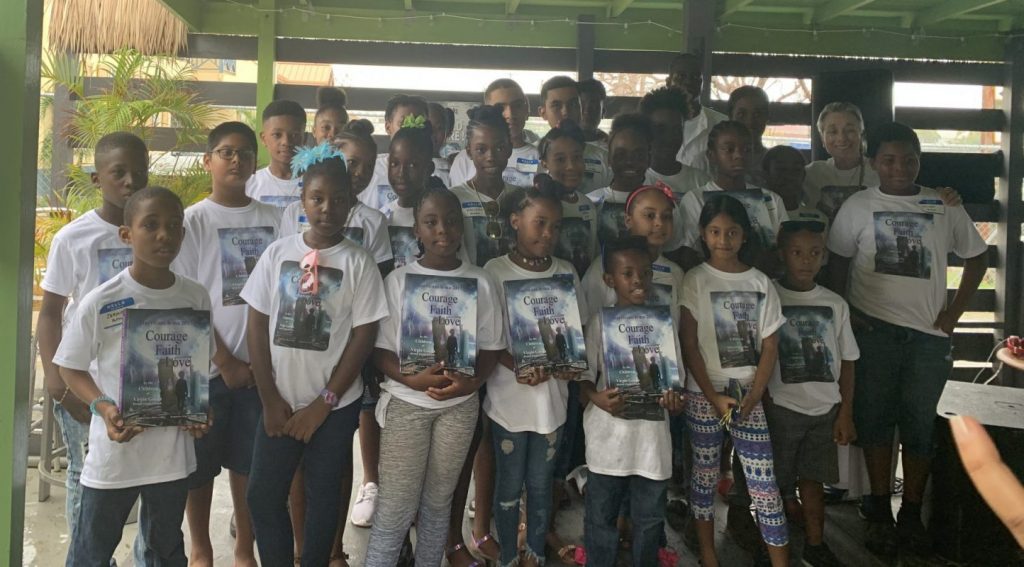 Editor Jacky Silvers poses with some of the Virgin Gorda children who contributed their stories to the book Hurricane Irma 2017: Courage, Faith, Love during the launch ceremony on Sunday. Photo: NICKLOUS KANHAI

After Hurricane Irma, Virgin Gorda author Jacky Silvers noticed something missing from the community’s narrative about the storm.

“I realised that the adults wanted to tell their stories, but the children never opened their mouths,” Ms. Silvers said.

She decided to change that. The result was the book Hurricane Irma 2017: Courage, Faith, Love, a compilation of Irma memories from 46 VG residents between the ages of 4 and 17.

During a launch ceremony on Sunday at Chez Bamboo, rainy weather did not deter a room full of attendees hoping to get a copy of the book signed by Ms. Silvers and the young contributors.

At the event, Ms. Silvers explained her inspiration for the book.

“I have a daughter who is a psychologist and I said to her, ‘What can we do to help the children?’” she recounted. “And she said, ‘Mom, we’ve got to get them to talk about it, because if they don’t talk about it now they will hold it in for the rest of their lives and still carry that fear.’”

To encourage the children to speak, she said, she used a specific tactic.

“I bribed all these kids with ice cream and cake,” she laughed.

“About 50 kids showed up, and I wished I had a camera because the difference between when they first sat down to talk to me — I could feel their terrible tense energy — and they didn’t stop talking,” she said. “I didn’t stop them from talking, … and when they were through, it was like a weight was lifted off their shoulders.”

In one section of the book, 12-year-old Carlos Martinez recounts his experience surviving Irma in his home in The Valley.

“The damage started in my house when the backdoor’s windows started breaking and then one of the front doors came out and then the wind came inside the house and everything started flying around,” he recalls in the book.

At the launch ceremony, Mr. Martinez said he initially was shy about telling his story.

“I felt a bit timid, but I just started talking,” he explained.

The book was illustrated by self-taught Tortola artist Greg W. Smith, a long-time graphic designer for The Welcome Guide.

His illustrations, he said, “tried to bring the readers as close as possible graphically into what the children were experiencing during the storm.”

Though the children’s stories ranged widely, Ms. Silvers found an overarching message in the compilation.

“The children are so much closer to God than the adults,” she said.