About five months after government officials held a ground-breaking ceremony at the Joes Hill housing project in April 2017, Hurricane Irma decimated the territory, scuttling the development before it even …

END_OF_DOCUMENT_TOKEN_TO_BE_REPLACED 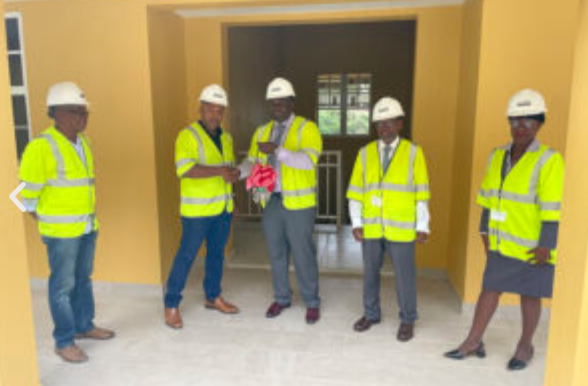 On June 15, government and Social Security Board officials toured the Joes Hill housing project, which they said was completed 13 months ahead of schedule. (Photo: PROVIDED)

About five months after government officials held a ground-breaking ceremony at the Joes Hill housing project in April 2017, Hurricane Irma decimated the territory, scuttling the development before it even started.

But despite that early setback and challenges posed by the Covid-19 pandemic, the project re-launched in 2020 and James Todman Construction Limited has now finished construction 13 months ahead of schedule, the Social Security Board announced last Thursday.

SSB officials also promised to soon review applications and select prospective homeowners to live in the new community, though they have not disclosed a timeline or prices for the sale of the 52 residential units.

“It feels great, knowing that in a few months we’ll have a number of families who are able to get home ownership for the first time,” said project manager Dion Stoutt.

“It’s something that’s real special to all of us.”

After plans stalled in the aftermath of Hurricane Irma, the project was revived when James Todman Construction signed an almost $18 million contract as part of the government’s $62.9 million Covid-19 stimulus package in May 2020, with officials at the time giving a three-and-a-half-year timeline for completion.

Construction began in July 2020, and continued ahead of schedule in the face of supply-chain problems and other issues caused by the pandemic.

Made up of 52 residential units and one commercial space, the seven-acre development overlooking Road Town marks the beginning of the SSB’s “First-Time Homeowners Programme,” according to the SSB.

Although the housing units will be available to Virgin Islanders, belongers, and residents of at least 20 years, officials have not decided yet how the recipients will be chosen, and they still need to hammer out other programme details as well, Health and Social Development Minister Marlon Penn told the Beacon on Tuesday.

Though Mr. Penn did not disclose how many people have already applied to live in the development, he said that “the process has been oversubscribed for some time now” and the SSB is looking to create a new method of reviewing existing applications.

He added that prices will vary depending on the style and size of the homes, though he did not list any figures.

The minister also declined to provide a timeline for the next steps in pricing the homes or selecting and moving in applicants, but he promised to address the House of Assembly once the SSB decides the way forward.

“Once that exercise is completed, information on the pricing options for the homes will be communicated to the public,” he said.

Last week, SSB Director Jeanette Scatliffe-Boynes made a similar promise, saying the public will learn more about the project soon, beginning with the review of applicants and followed by the selection of prospective homeowners, the mortgage process, and the sale of the units, according to the SSB announcement last Thursday.

“Our first step will be to reconnect with the applicants,” Ms. Scatliffe-Boynes said. “As we continue the process, the people can trust the Social Security Board to remain transparent throughout the stages.”

Ms. Scatliffe-Boynes could not be reached for comment on Tuesday.

Following a handover ceremony on June 15, Mr. Penn, Ms. Scatliffe-Boynes, Mr. Stoutt and SSB Chairman Glenroy Forbes toured the development, including the interior of the homes, according to the SSB.

“I’m happy to see the project come into fruition,” the minister said. “It’s really a beautiful sight to behold, [and a] very good use of space in terms of how the buildings have been designed and finished.”