Following a temporary closure of Foxy’s Tamarind Bar on Jost Van Dyke due to a failed health inspection, a struggle about the future of the iconic establishment burst into the …

END_OF_DOCUMENT_TOKEN_TO_BE_REPLACED 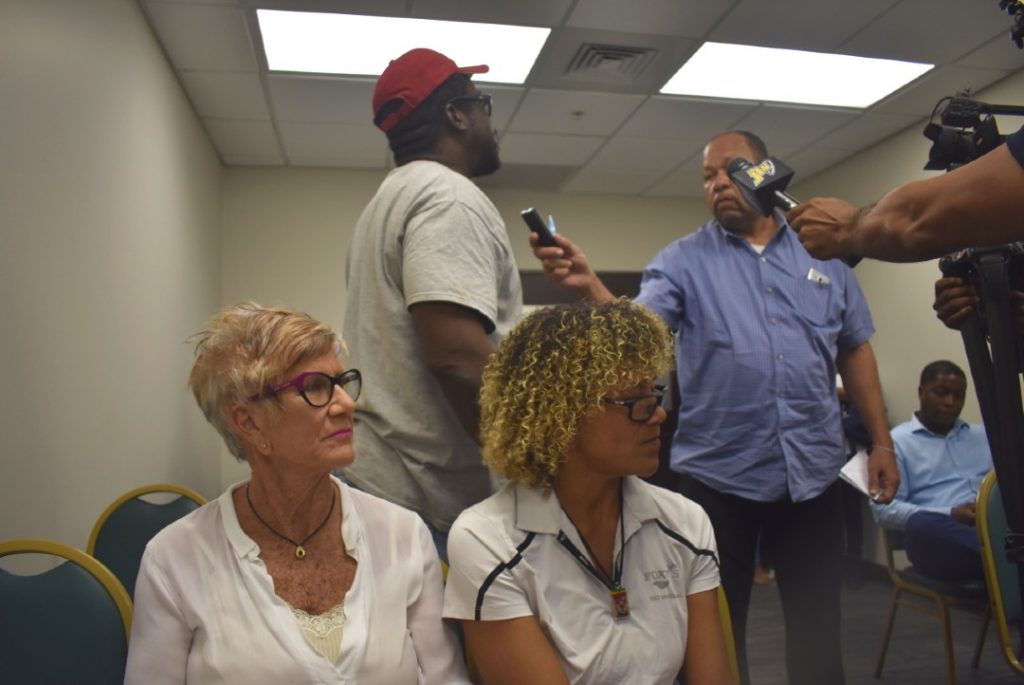 Following a temporary closure of Foxy’s Tamarind Bar on Jost Van Dyke due to a failed health inspection, a struggle about the future of the iconic establishment burst into the public domain on Monday as Philicianno “Foxy” Callwood sparred with his wife and children during a dramatic press conference at Maria’s by the Sea.

The disagreements centred largely around an American named David Dietrich, who claims he met Mr. Callwood at Foxy’s while on vacation and was asked to help him with a proposed business venture. Mr. Callwood, who called the press conference with Mr. Dietrich, described the American as a close “friend” who has protected his interests while serving as the business’s director of operations in recent years.

“Do not believe what you hear about David Dietrich is ripping me off or stealing anything from me,” Mr. Callwood said. “After all these years, I ask David if he could come in and please help Foxy. I want my business to run like my life. … When I look around, there ain’t no dollar; there ain’t no money.”

But Mr. Callwood’s wife Tessa and three of his children interrupted the briefing to argue that Mr. Dietrich is a “con man” and “scam artist”who is taking advantage of the 82-year-old.

“It’s very hard. I feel that he’s a victim of elder abuse,” said Ms. Callwood, who maintained that Mr. Dietrich had manipulated her husband, divided the family, and engineered a hostile attempt to buy out her 50 percent share in the 51-year-old business for an unfair price.

She also argued that she had worked hard for the business for decades, reinvesting the proceeds instead of profiting personally.

Mr. Dietrich, though, insisted that he would not benefit from what is to come, and said the goal is “very simple:” Mr. Callwood wants full ownership of the business, he intends to hire outside sources to manage it, and Mr. Dietrich will relinquish his role as director of operations.

“I never intended to get this deep,” Mr. Dietrich said. “I only got this deep because Foxy and I became very good friends and Foxy had nowhere else to turn to when he was up against his family and people he thought he could trust.”

The press conference was opened by Mr. Callwood, who sat behind a table beside Mr. Dietrich and introduced himself.

He then spoke for several minutes, telling stories about how he got his nickname and how he started his business.

“I’m trying to explain to you who Foxy is,” he said later. “I am not a liar, I’m not a cheat. I’m not like this. For years, my bar been running out of control: nothing for Foxy.”

He added that he had been unable to obtain money from the business when he needed it.

“That’s why I want my business to go under one captain,” he said. “No two and three captains run a ship, so I want my ship to be run by one captain.”
Because of what he regards as poor treatment, he wants “to buy out [his] partner,” he said of his wife.

Mr. Callwood then invited the media to ask questions.

Asked to elaborate on his statement that his business was “out of control,” he described failed ventures that he said his family tried to open outside of JVD, and told attendees that his wife had said she didn’t want him as a business partner in those endeavours.

“I felt so bad that they couldn’t pick me or use Foxy’s in Tortola,” he said. “Now they want to kick me out of Jost Van Dyke, out of my land that my father willed to me. … They gotta be kidding.”

Shortly thereafter, Mr. Dietrich was asked about his role in the plans.

“For a little more than five years, I’ve been the director of operations in estate management as well as the boat captain for Foxy’s Tamarind Bar,” Mr. Dietrich responded. “Foxy originally asked me to start looking at the business because there were no funds avail- able for him when he was looking for funds.”

He also claimed that Mr. Callwood recently received a $12,500 dividend out of some $2 million worth of business done over a year by a retail business owned jointly by Mr. and Ms. Callwood.

“After years of investigation and mountains of evidence in documentation form, we have everything we need to come for- ward today so Foxy can reclaim what’s rightfully his and stay where he is,” Mr. Dietrich said. “They’re gonna sign and have Foxy resign from the company as a director, and if he doesn’t, as a majority of two directors, they’re gonna force him out. The man doesn’t wanna be exiled from a place he created.”

Ms. Callwood and the couple’s daughter Justine Callwood — who sat next to her mother during the press conference and also spoke out against Mr. Dietrich — are the other two directors of the business.

When Mr. Dietrich was asked about rumours that he is plotting to steal Mr. Callwood’s land and company, Mr. Callwood let out a loud laugh.

Mr. Dietrich responded, “Foxy has a will and trust that does not have my name on it. … Just because his kids and family think they deserve it, that’s up to Foxy to decide, not me. My name is not on Foxy’s property. I get nothing out of this, nor do I even get barely a paycheque.”

He added that he is taking Mr. Callwood’s side “out of friendship” and pointed out that none of Mr. Callwood’s family members were sitting by him at the table.

“If nobody else is going to help Foxy, who’s gonna help Foxy?” he asked.

Mr. Dietrich also alleged that he had received threats from Mr. Callwood’s children.

“Greg Callwood has threatened the life of my daughter. Dean Callwood posted pictures of my daughter on site; got relatives to back him on site. I don’t appreciate that,” Mr. Dietrich said, adding that his wife and 10-year-old daughter had left the island but he plans to remain.

On Sunday, Dean Callwood also posted pictures of Mr. Dietrich and his family on Facebook, and wrote,“It’s time to bring it all out into the open” before summarising the family dispute.

But since the press conference, he removed the picture of Mr. Dietrich’s family and edited the post.

Additionally, Mr. Dietrich shared with the Beacon an email message he said was circulated by Dean Callwood encouraging people to report “all sighting time and place” of Mr. Dietrich.

Asked by the media how long he has been in the Virgin Islands, Mr. Dietrich responded “seven years” before being interrupted by a shout of “too long from Greg Callwood, who sat in the audience.

The son then claimed, “This is a con man and he scam my dad.”

“My dad gave him a whole water taxi business for himself,”he said, adding that he never threatened Mr. Dietrich as alleged. “He doesn’t care about anything. He’s all in for it for himself.”

His father shouted back, asking, “But what scamming has David done?”

His son Dean also stood up to speak, recalling how he and his siblings “slaved” on the land for their father in their younger days. He also told the press that his father planned to give the bulk of his assets to his wife, who is from Europe, and the children he had with her, and that what was left over would be divided among the other children and grandchildren.

His father, he added, brought Mr. Dietrich on stage at his annual Old Year’s Night Party and introduced him as “the new Foxy.”

Dean Callwood also referenced an online accusation about a St. Thomas restaurant called The Seafood Jungle that Mr. Dietrich operated in the early 2000s. The TripAdvisor review in question purports to have been written by a former employee of Mr. Dietrich.

“They up and left the island in the middle of the night,” the review stated. “They owed a ton of money and will never be able to show their faces in St. Thomas again. I would know because I used to work there. They called me from the airport and had me tell everyone that the restaurant was closed.”

In a separate interview with the Beacon, Mr. Dietrich de- fended himself by claiming that the restaurant opened ten days before the terror attack of Sept. 11, 2001, and he eventually had to shut it down due to the resulting damage to the St. Thomas economy and heightened border security.

Dean Callwood also alleged that his father tried to scam him out of his house, which he apparently wished to rent out to Mr. Dietrich, according to the son.

“We all worked faithfully and hard for this man,” he said of his father.“It’s sad to see that he could stand up there and say that we have done nothing.”
Wife and business partner Tessa Callwood took the microphone next.

“My main aim is to keep our company solvent,” she said, before recounting how she arrived in the territory in 1971 and helped expand Foxy’s with her husband.

Since then, she said, she has cooked, cleaned, served food and drinks, shopped for the restaurant, raised children, and worked hard to grow the business to where it is today.

During that time, she said, the establishment was operated as a “mom and pop.”

Her husband, she added, has changed in recent years.

“What Foxy doesn’t tell you about the businesses, and the supposed losses and the fact that he never got money, is that he has al- ways said, ‘I’m a man; I don’t wear a watch; I don’t have a phone; I don’t need any money; when I finish this I’ll just go back to lying in my hammock,’” she said, adding, “He gave me control of the money, and that was fine. What I did with the money was just put it back into the business, back into the business.”

Ms. Callwood said her husband and Mr. Dietrich offered her a $1 million lump sum and $50,000 annually for five years for her share of the company, but the offer was available only for ten days and she refused to accept it without a proper evaluation of the business.

She also expressed suspicions that Mr. Dietrich had tried to sabotage the business, leading to its closure.

For instance, she described occurrences that led to dysfunction at the bar, like a water bottle jammed into a pipe. She linked these instances to Mr. Dietrich, claiming that he was jeopardising the business in order to back her “into a corner.”

“All I want to do now is keep the business open,” she said. “I wish to run our business properly. He told Dean he has 15 more [tricks] up his sleeve to keep us closed. We think Foxy’s should be open. It’s a duty. We’re an iconic brand.”

Foxy’s was shut down temporarily after failing a health inspection. Violations discovered by the Environmental Health Division included pest droppings, a lack of hot water, mould in ice makers, blocked toilets, and mould on paper towels in restrooms, according to a list provided by Mr. Dietrich.

As of 3 p.m. on Tuesday, however, Foxy’s Tamarind Bar was back open, according to a Facebook post by the business. Along with a picture, the post read, “Yes, Everyone, we are OPEN. Please do stop by.”