The 7th annual BVI XTri was held at Smugglers Cove and Belmont on Sunday. Michael Ellis won the event with a time of 48 minutes and 50 seconds. A newcomer …

END_OF_DOCUMENT_TOKEN_TO_BE_REPLACED 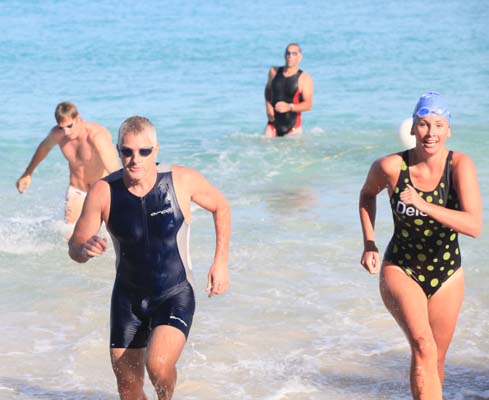 Michael Ellis sprints out of the water during the triathlon. He would win the event. (Photo: BROADSWORD COMMUNICATIONS)

The 7th annual BVI XTri was held at Smugglers Cove and Belmont on Sunday.

Michael Ellis won the event with a time of 48 minutes and 50 seconds. A newcomer to the Virgin Islands triathlon scene, but an experienced mountain biker and triathlete, Mr. Ellis beat second place finisher Andrew “Tubes” Thompson by one minute and 22 seconds.

The event started with a 600-metre, two-lap swim at Smugglers Cove which included a sprint around a flag on the beach at the end of the first lap. Competitors then did a five-mile bike ride and finished with a two-mile run along Arawak Drive and back along Palm Drive.

Messrs. Thompson and Ellis recorded very fast bike times. The Belmont climb and various high speed descents took its tol,l but everyone finished including Keeble McDonald of the Governor’s Team who jogged to the finish with his bike over his shoulder after surffering a flat tyre on the final descent.

Zebalon Maclean won his first triathlon with a time of 30 minutes and five seconds in the shorter Try A Tri course.

The next event on the BVI Triathlon Federation is the National Sprint Championships on May 29. For more information visit: www.tribvi.vg