Designer Kristin Frazer marked the 10-year anniversary of her company Trèfle in a way she couldn’t have predicted — with the passage of Hurricane Irma. Though Ms. Frazer’s label has …

END_OF_DOCUMENT_TOKEN_TO_BE_REPLACED 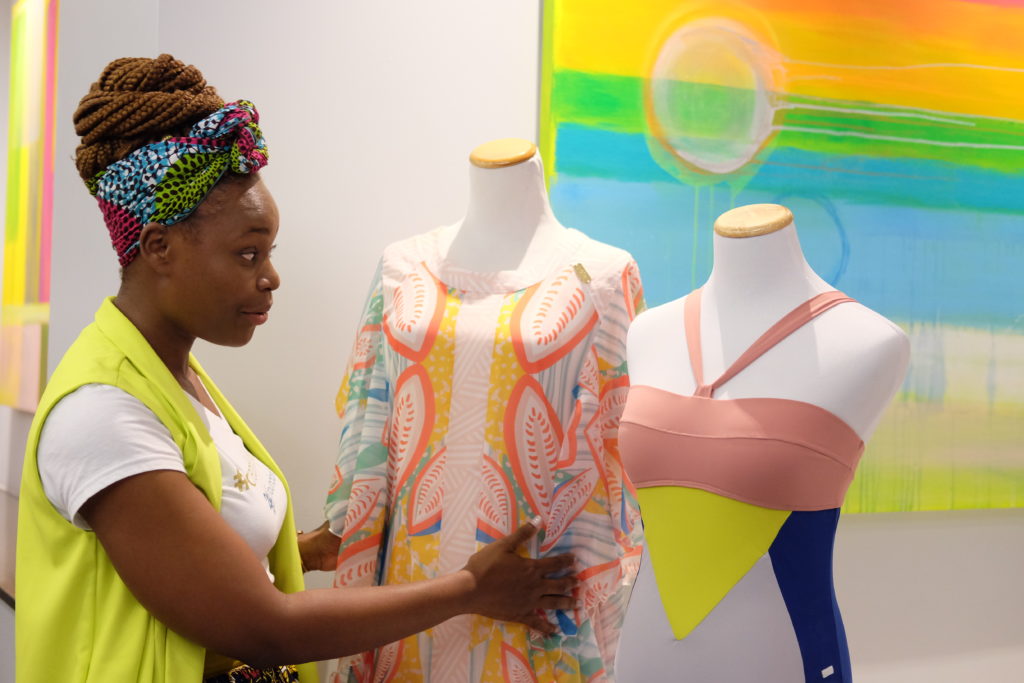 Kristin Frazer showcased her designs at the launch of the BVI Restoration Foundation. (Photo: AMANDA ULRICH)

Designer Kristin Frazer marked the 10-year anniversary of her company Trèfle in a way she couldn’t have predicted — with the passage of Hurricane Irma.

Though Ms. Frazer’s label has earned international praise over the past decade (Beyoncé has worn her creations and OtterBox released two signature phone cases that feature her designs), the storm threw a curveball for her business.

“As you can imagine, me designing swimwear and resort wear, post-Hurricane Irma where does that put me?” she said. “I realised that if my balcony’s gone, I’m pretty sure all the resorts are gone, all the boutiques I sell to are gone. What is left? What do you do?”

The foundation is gathering funding to provide training workshops for entrepreneurs, purchase new equipment and inventory for hurricane-damaged businesses, and give membership access to co-working spaces.

Meade Malone, a member on the foundation’s board of trustees, said the non-profit will help give entrepreneurs a leg up after last year’s natural disaster.

“We have in our entrepreneurs a resiliency and a desire to succeed that goes beyond Irma. That inspired me,” he said during an official launch event earlier this month. “[I found out] that they were making some strides, but that they needed some help.”

So far, the foundation’s crowdfunding campaign has raised $13,500 in donations.

The non-profit is also partnering with organisations like Forge International (another creation of Mr. Malone’s), a new training centre and workspace for entrepreneurs in the Pier Park.

Mr. Malone said the purpose of the foundation goes beyond amassing donations.

“[We’re not] just about trying to gear up some money,” he explained. “I think it’s important that we put it in context so that the institution that we are trying to build seems to have a foundation on which we can build.”

After Irma, there’s a new call to create an environment where entrepreneurship — not just within the tourism and financial services sectors — can thrive, he said.

“The challenge is for us to diversify our economy and find new sources of revenue,” Mr. Malone said.

Some entrepreneurs have already received direct support from government as well as the private sector.

Lorna Smith, who is also on the board of trustees for the BVI Restoration Foundation, announced at the launch that some of Kristin Frazer’s designs would be presented as gifts during a promotional tour in Asia this week and next.

Premier Dr. Orlando Smith is leading a delegation to five cities, including Hong Kong and Singapore, to tout the VI’s financial services offerings.

“And what BVI gifts are we using? We’re going to use Kristin’s gifts,” said Ms. Smith, who is Dr. Smith’s wife. “To the entrepreneurs in this room and those that aren’t here: Keep pushing and keep that entrepreneurial spirit alive.”

Alexandra Durante, executive director of the Eastern Caribbean Soap Company and another entrepreneur featured at the launch, said business owners need all the help they can get.

Though her shop has since reopened, she said she “lost everything” after Irma.

“These are people who have worked very hard, and continue to do so, and we will make it, but we just need a little bit of help,” she said.

Also on the board of trustees are BVI Tourist Board Director Sharon Flax-Brutus and Ray Wearmouth, managing partner at Ogier.