The government-owned Prospect Reef Resort has seen better days. It is in need of a facelift, it is behind on tax payments, and it is mired in a legal battle …

END_OF_DOCUMENT_TOKEN_TO_BE_REPLACED 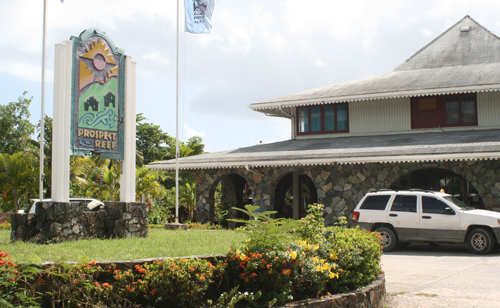 The government-owned Prospect Reef Resort has seen better days. It is in need of a facelift, it is behind on tax payments, and it is mired in a legal battle with one of its tenants.

Officials want to change that, which is why Premier Dr. Orlando Smith announced in September that government is working on an agreement with the ICA Group that would have the company undertake a $100 million project to transform the property into a four-star resort.

On Monday, Opposition Leader Julian Fraser spent nearly 30 minutes quizzing Dr. Smith on various aspects of the project, including Prospect’s current financial condition, the identity of ICA, and why ICA was chosen to undertake the development.

“How is it that your government could allow a company that is owned by you to be owing Inland Revenue money, owing NHI money, and so on and so forth — Social Security?” Mr. Fraser asked after Dr. Smith admitted that the government-owned company is in arrears with government. “It’s repugnant.”

Mr. Fraser further questioned the premier on whether Prospect’s employees have also been punished along with the hundreds of other employees who have reportedly had their NHI benefits suspended due to their employers’ delinquency in paying NHI premiums — a practice that appears to violate NHI regulations that state that workers’ benefits cannot be affected due to their bosses’ failure to pay into the system.

“The NHI and Social Security are also supported by government so that the coverage for the folks at Prospect continues, and the payments will be made by the end of this year,” Dr. Smith responded.

Mr. Fraser asked why revenues fluctuated during those years, and Dr. Smith said a major contributor was the housing of construction workers who were working on the Peebles Hospital project between 2006 and 2010.

Another contributing factor could be a spat with a tenant the resort claims owes Prospect more than $90,000 in overdue rent and utility payments.

According to a claim filed by the resort in 2012, the Prospect-based charter company Caribbean Sailing BVI and its owner, Chandi Singh, owedProspect $90,077 for “arrears of rent and utilities,” as well as $7,800 for “a stay at the hotel at Prospect Reef.”

Mr. Singh, in turn, has filed a counterclaim against Prospect for allegedly breaching its contract with the company, court documents state.

Details on the cases are scant — both parties have declined to comment, and the number of public documents on the case is limited — but the High Court Registry docket states that the case is set to go to trial on April 25, 2017.

Along with grilling Dr. Smith on the current state of the resort, Mr. Fraser also asked questions pertaining to government’s future plans for the property, including ICA’s net worth, background, local affiliation, shareholders, directors and nationality.

Dr. Smith provided specific answers for some of those questions. For others, he didn’t.

For instance, Dr. Smith listed all the players involved with ICA, but he didn’t provide its net worth or nationality.

Mr. Shaikh wrote the Beacon on Monday night to clarify that Mr. Malone is not, in fact, involved with the project, and Mr. Malone made a similar statement.

“Our firm provided professional services to the group only,” Mr. Malone said. “We are not partners.”

‘I need a country’

In response to Dr. Smith’s answer, Mr. Fraser pointed out that the Middle East isn’t a country.

Dr. Smith said that government did its due diligence in investigating ICA, and established that it has “significant assets” and will be able to carry out the project.

“Net worth, Madam Speaker, and nationality,” Mr. Fraser stated when Dr. Smith still didn’t provide that information. “And also, can I get copies of the proposal that was submitted?”

Dr. Smith agreed to provide ICA’s proposal, but he still didn’t answer Mr. Fraser’s questions. The opposition leader then moved on to asking him about another topic.

According to Mr. Shaikh, ICA is based in Dubai and has an operating company in Denver, Colorado.

Some of Mr. Fraser’s questions about ICA’s finances were also reviewed by private consultants when government was considering ICA last year for the Terrance B. Lettsome International Airport expansion project.

In November 2015, consultants and government officials met with representatives from IDL Projects Inc., the Sir Robert McAlpine Group, and the ICA Group to discuss the possibility of those firms partnering to finance, expand and operate the airport.

At the time, IDL and McAlpine had formed a consortium with ICA, which proposed to bring financing and an operator, according to the project’s business case — a document drafted by the international firm PricewaterhouseCoopers that analyses various aspects of the airport project.

However, “PwC and [Baker & McKenzie] met with this consortium … and conducted a background investigation on ICA, and found no evidence of ICA’s ability (past or present) to bring financing and an operator to ultimately deliver the project,” states the business case, which was submitted to government in May. “Their financing sources were obscure at best.”

Government subsequently opted against using a public-private model for the project, deciding instead to finance the expansion itself and contract a firm to carry out the work.

Mr. Shaikh, for his part, strongly disputed the characterisation of his firm that was in the business case, and told the Beacon in September that he would still like to undertake the airport project.

He also said at the time that he’s “excited” to undertake the Prospect project and that he has big plans for the resort.