The government is seeking a consultant to draft a plan to help the Virgin Islands transition to 100 percent renewable energy by 2050.  But such a plan was approved by …

END_OF_DOCUMENT_TOKEN_TO_BE_REPLACED 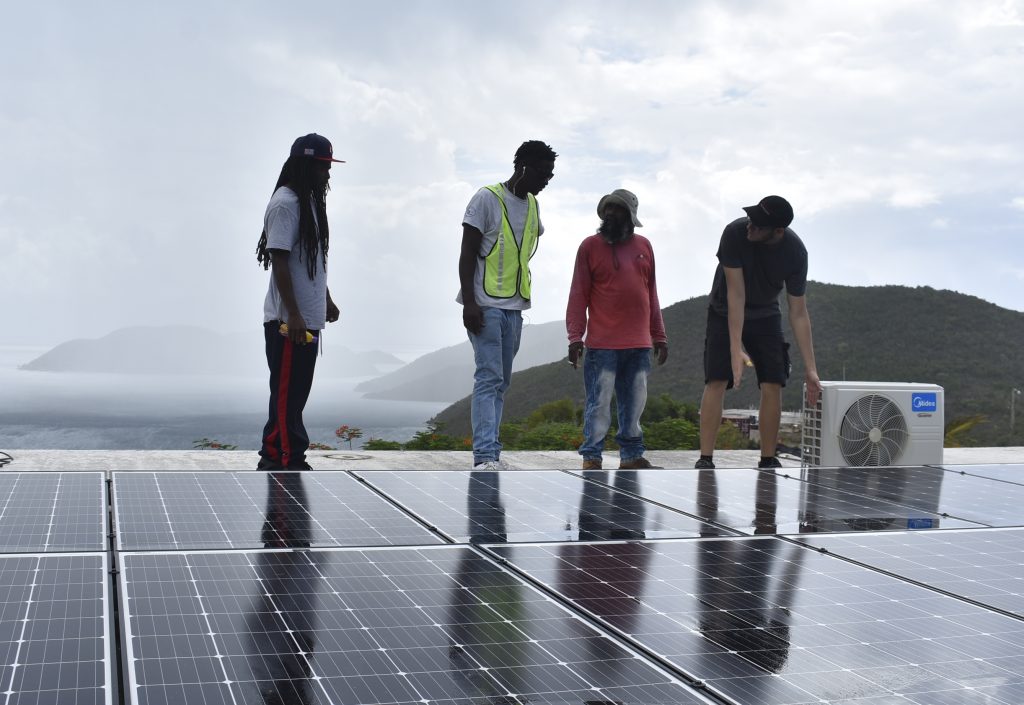 Last year, workers with aTec, a Virgin Islands renewable energy company, installed solar panels on the roof of Robinson O’neal Primary School in Virgin Gorda, one of the few public buildings in the territory equipped with the technology. Recently, government has deemed four bidders qualified to submit proposals to consult on the creation of an Energy Transition Plan aimed at helping the territory achieve 100 percent renewable energy by 2050. But the requirements for the new plan suggest that it will rehash much of the work that already has been done to map out a renewable energy future. (File photo: JOEY WALDINGER)

The government is seeking a consultant to draft a plan to help the Virgin Islands transition to 100 percent renewable energy by 2050.

But such a plan was approved by the previous Cabinet shortly before the February 2019 general election, and VI officials aren’t saying why a new one is needed now.

In the aftermath of the 2017 hurricanes, the Colorado-based non-profit Rocky Mountain Institute — which in 2014 merged with Sir Richard Branson’s non-profit Carbon War Room — partnered with the government and the BVI Electricity Corporation to determine how to rebuild the territory’s electricity grid over time to be more resilient and environmentally friendly.

The plan, which was tabled in the House of Assembly in June 2019, draws upon comprehensive studies of the territory’s electricity system, forecasts the global energy market, and assesses the priorities of various stakeholders to illustrate how VI leaders could greatly increase renewable energy generation in the future.

Now, however, the Premier’s Office is seeking help drafting what appears to be a very similar strategy.

Last June, government issued a request for expressions of interest for a consultant to draft an “Energy Transition Plan” that would identify “strategies to achieve stated energy conservation and renewable energy goals … with an understanding of the regulatory context and conditions” in the territory.

Last month, the Cabinet followed up: During a March 17 meeting, members decided to invite four firms, each of which responded to the EOI request last June, to submit technical and financial proposals for the consulting services, according to a summary of the Cabinet meeting provided by the Cabinet Office.

But the stated goals of the new plan bear a close resemblance to what is included in the R-NETS strategy.

The 2020 EOI request, for instance, states that the new plan should “be structured in at least three phases to capture short-,medium- and long-term actions, recommendations and opportunities.”

In a section of its report titled “Action Plan,” the authors outline “specific immediate-, medium- and long-term investment projects that the BVI should pursue.”

Many of these projects were first proposed years before the R-NETS was drafted.In fact, the R-NETS was conceived as a means of enacting earlier goals laid out in the territory’s 2016 Energy Policy, which itself aims to hit a set of targets established in 2013.

Because progress toward these goals has been stymied repeatedly over the years, the territory continues to produce nearly all of its electricity by burning diesel fuel.

Last July, BVIEC officials promised change when they announced a $4.6 million contract for a solar field on Anegada designed to tick off the 2013 goal for reducing fossil fuel use on the sister island.

But construction has yet to start, and the chosen contractor, Maryland solar developer Rob Wallace Jr., has a history of allegations of fraud, broken contracts, refusal to pay his bills, and other misconduct sometimes associated with projects similar to the one he was chosen to build on Anegada.

The desired three-pronged structure of the planned Energy Transition Plan is not the only aspect of the new effort that echoes RMI’s renewable transition strategy.

Among other elements, the 2020 EOI request stated that the consultant should assess the “current regulatory framework for energy policy … and renewable energy in the BVI;” identify “energy conservation, renewable energy and energy storage opportunities;” calculate “the financial implications … and other impacts of developed strategies and recommendations;” and analyse “the potential greenhouse gas emission reductions that can be achieved through implementation of the plan.”

Many of these elements are present in the R-NETS strategy, which includes the results from detailed projections modeling the cost-effectiveness and emissions-reduction potential of six renewable development “scenarios.”

And after months of studying the territory’s electricity grid and capacity for renewable development, the strategy’s authors concluded that to make solar and other alternative technologies attractive on a large scale, the BVIEC must overhaul its renewable energy regulations.

“BVIEC should … examine innovative approaches to its current business model,” the R-NETS states.

As an example of one such innovation, the authors suggested that the BVIEC figure out a way to recoup “utility investments” in renewable energy infrastructure to then help residents install solar panels on the roofs of their homes.

The utility has been working toward that goal in recent months, though widespread use of solar technology on homes is not in effect.

Besides RMI, the three other companies shortlisted after submitting expressions of interest — and therefore invited to send detailed proposals — are DNVGL; Wood Environment and Infrastructure; and WSP, according to the March 17 Cabinet brief.

DNV GL, a Norway-headquartered consulting firm with offices around the world, previously was contracted to consult on the tender process for the Anegada solar project, but three of the four losing bidders claimed that the firm acted without transparency and communicated poorly. Premier Andrew Fahie and other government leaders, however, defended the tender process as fair and transparent.

WSP, meanwhile, bills itself as a “globally recognised professional services firm” that originated in Canada and opened its first Caribbean office inTrinidad and Tobago in 2004, followed by its Colombia office in 2011.

Wood Environment and Infrastructure appears to be a US-based branch of the John Wood Group, a multinational consulting firm based in Scotland.

By the deadline of 3:10 p.m. on July 10, each of these companies was required to send an email that included a C.V. of its key members; a description of renewable energy, climate adaptation, or sustainability planning projects it has carried out in the past five years; and a 1,000-word essay demonstrating understanding of the assignment and the desired role of the consultant, according to the EOI request.

As part of a process led by the Premier’s Office, interested applicants were instructed to email Finance Ministry Procurement Coordinator Ishma Rhymer, and their proposals were reviewed by the Central Tenders Board, according to the March 17 Cabinet brief, which did not say if any other firms expressed interest.

The expressions of interest were evaluated on a scale of 100 points, with the firms graded on factors including team members’ experience with similar projects and their experience in the Caribbean or other tropical regions, according to the EOI request.

Only firms that earned at least 70 points qualified for the shortlist and were invited to submit tenders, the Premier’s Office stated.

Neither the Cabinet brief nor the EOI request said when or how the firms should submit their proposals.

The premier, BVIEC General Manager Leroy Abraham, and BVIEC Chairwoman Rosemarie Flax did not respond to requests for comment or explain why Cabinet didn’t approve the shortlist until about nine months after the submission deadline.